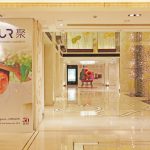 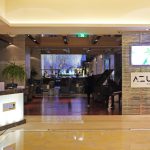 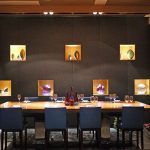 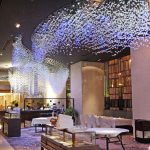 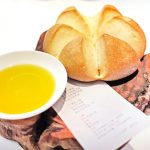 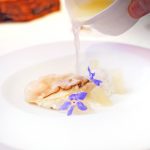 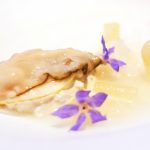 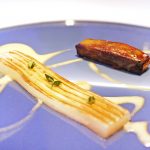 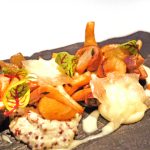 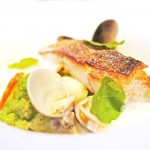 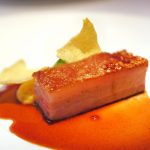 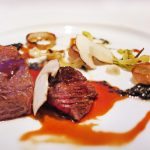 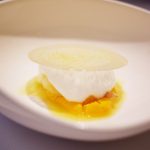 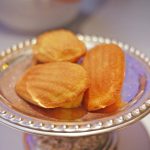 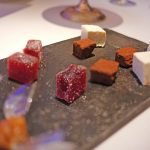 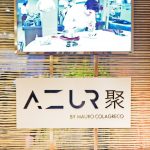 Image 1: After I was told that one of my favourite chefs in the world was opening a new restaurant in the Shangril-La Hotel, Beijing, it didn’t take me long to book my flight to China. After all, the Michelin 2-star chef, Mauro Colagreco, has continued to impress the judges, by using his unique mix of Argentinian background combined with French training to create a distinctive French Riviera cuisine – even rising to 6th in the World’s 50Best list, this year!

Image 2: The restaurant is next to the main lobby of the hotel. On the right, you can see a video showcasing Mauro’s restaurant, Mirazur, back in Menton, just a few miles along the coast from Monaco.

Image 3: A semi-private area leading to an open and welcoming space, featuring a rather striking wave in the sky, created with precious stones. We were quickly met by the staff, and shown to our table. The concept of fine dining still isn’t quite mature in China, and restaurants are often let down by their service team.

Image 4: Judging by tonight’s experience, though, it was obvious that the hotel had employed top-quality senior staff, as both the sommelier and the manager were knowledgeable, and keen to answer my questions. As a result, we had lots of fascinating discussion on food and wine, ensuring that our dining experience was as interesting as it was tasty. I have to say, though, that this excellence in service standard didn’t extend to the entire staff – some of the more junior servers were way below the standard I expect of a place like this.

Image 5: While it’s true that the meal here gives a glimpse of Mauro’s capabilities, it’s a long way from the Mirazur experience. However, there’s no doubt that more than enough to beat anything else in Beijing’s European fine dining arena. The tasting menu began with the same bread as I’d had at Mirazur, complete with the chef’s own brand of lemon-infused olive oil. The following 7 courses of the menu were all signature dishes that I’d also had at Mirazur.

Image 7: Though the pear wasn’t as sweet as I had hoped. Still, as a dish, it was almost as good as the Mirazur version.

Image 8: Again, it’s hard to fault the presentation of this next dish, a mixture of Pan-fried squid, eggplant and Bagna Cauda sauce. But, while it was good on the eye, it wasn’t quite so pleasing to the taste buds – I thought the squid was rather weak in flavour. I wouldn’t say the course was a failure, exactly, but nor was it up to the standards one comes to expect of a chef like Mauro.

Image 9: As expected, his signature course ‘The forest’ is also featured in the menu here. It’s a perfectly judged, and beautiful-tasting, mix of quinoa risotto, mushrooms, potato and parsley foam. Not disappointed at all.

Image 10: Here’s another course that flattered to deceive. Consisting of grilled sea-bass, shellfish stew and citrus vegetables, it was fresh and delicious looking, but – in actuality – I found the see-bass weak and unassertive. For me, it let the whole dish down. I suppose, when you know the abilities of a chef like Mauro, you’re just not satisfied with anything less than perfection!

Image 11: This course of crispy suckling pig and corn chips had a wonderful texture. It’s bright, simple appearance was a clue to its flavour, which was strong and uncomplicated. Very nice!

Image 12: This course of Wagyu beef, vegetable condiment and black sesame sauce was pleasant without being outstanding. The beef was perfectly cooked and ‘melt-in-the-mouth’ tender, and the sauce complemented it well, though there was that same lack of strength in the ingredients, compared with my memory of the Mirazur, that I’ve already noted about a couple of other courses. Still good, though.

Image 14: Final touch to the meal… fresh madeleine from oven…

Image 15: … and petits-fours. Concluding thoughts? Well, though they had obviously bought in as many ingredients from Europe, as was practical, in an attempt to recreate some of Mauro’s signature dishes, I still found some of the ingredients not quite up to the Mirazur standard.

Image 16: From the amuse bouche, right the way through to the petits fours, the food experience I had at Mirazur was more elaborated and finessed, and in every way more satisfying. Plus, of course, there was a spectacular view of the Mediterranean! All the same, it would be unfair to say that the Azur isn’t worth visiting. Indeed, I’d say the opposite – as Beijing is notably poor in high-end European dining venues, the Azur is easily the best fine dining in town.