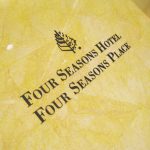 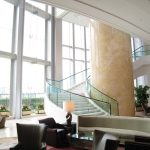 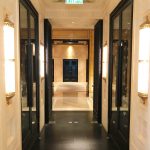 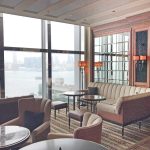 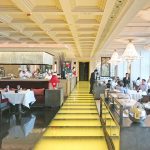 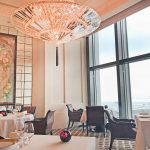 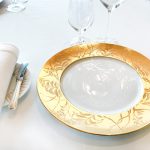 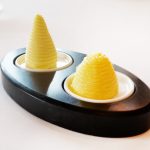 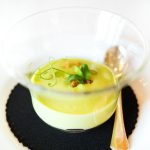 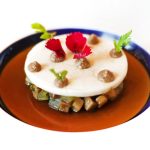 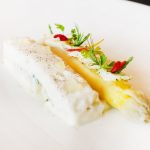 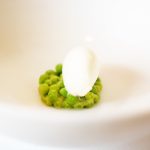 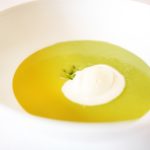 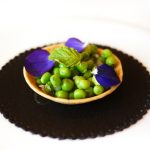 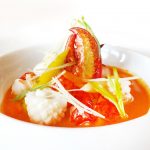 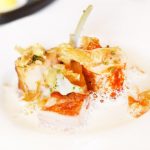 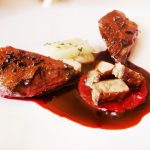 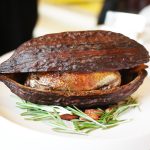 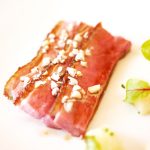 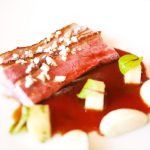 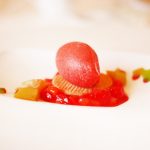 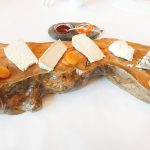 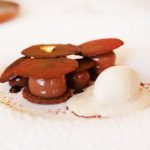 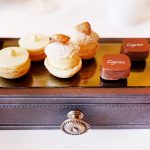 Today, we’re lunching at Caprice, the crown jewel of Hong Kong’s French fine-dining scene, situated on the 6th floor of the Four Seasons Hotel. The Head Chef here is Guillaume Galliot, who arrived in 2017, after heading up The Tasting Room in Macau. In case his abilities were in any doubt – which they weren’t – Chef Guillaume immediately set about gaining Michelin 3-star status for Caprice, and achieved his goal within a year. This is my first visit, and I’ve been licking my lips in anticipation for the past two days.

As there were three of us, we decided to order the 4-course set lunch, with each of us choosing different dishes. That way we could sample much of the menu. However, we also ordered one dish to share – their signature Racan Pigeon from the a la carte menu. And it was delicious. In fact, none of us could find any flaw whatever in the food, from start to finish. Every single combination was perfect, from the refreshing green pea and mint starter, to the silky layer of foie gras covered in mushroom jelly and the beautifully fresh lobster finished with a flavoursome carrot bisque sauce. But it wasn’t just the outstanding creativity we enjoyed – we also appreciated their use of the highest quality ingredients.  I mean, how often you find foie gras and lobster in a set lunch – especially with such generous portion sizes as we found here?

The signature dish was pigeon – a Racan breed from the Loire Valley (the Chef’s home region). The bird had been slaughtered in a way which retained the blood, resulting in firmer flesh than would otherwise have been the case, and had been cooked in a cacao pod with onion puree, salsify and cacao jus. This not only gave the dish a deeper and more enticing aroma, and a richer flavour, but enhanced its presentation too. If you’re the kind who likes a touch of gamey flavour in your meat, you’ll love this course!

Overall impressions? Well, you might expect a place like the Four Seasons to have a world-class kitchen team, and they had clearly not spared the pennies in getting one. The quality of ingredients, the freshness of the seafood, and the amazing blends of flavour in every course were all evidence of this. And the quality of the food wasn’t the only thing that convinced us that the hotel had invested large sums in their operation – there was the obviously over-the-top markup on the wine too. Unless you’re careful, two mediocre glasses of wine could cost you more than the set lunch itself!

While the quality of the food was beyond criticism, the same couldn’t be said of the service levels. Frankly, we found this as disappointing as it was surprising for an establishment like the Four Seasons Hotel. Basically, they made a complete dog’s breakfast of our order, serving the wrong food – twice! – to one of us. After the second occasion, the manager had to ask us to repeat our orders, just to make sure they had got it right (this was particularly important as one of our group had a known food allergy!). But that wasn’t the end of the confusion – one of us ordered additional cheese in her dessert, which they somehow took to mean that she wanted cheese instead of dessert.  So, yes, a bit annoying, as the flow of our conversation was repeatedly interrupted. Still, I suppose one has to be understanding one these occasions. After all, it was very apparent that every member of the service team were well-trained and knowledgeable, and anyone can make a mistake. My guess is that one of the staff tried to correct the first error, but miscommunicated with a colleague, resulting in the second error. I feel pretty confident that it was a one-off situation, not a regular occurrence.

I’ve no doubts that this is one of Hong Kong’s top French restaurants. Physically, it’s pretty impressive, with its classy dining room, stunning chandeliers, and floor-to-ceiling windows which deliver lots of natural light.  Somehow, though, it felt very corporate and impersonal, seeming to prioritise efficiency and precision over warmth and ambience. The team had an almost military approach to service – precise and disciplined, but rather cold and distant. But perhaps it was just the lunchtime service – maybe dinner would be different. I’d be very keen to find out, because the food, as I’ve said, is definitely excellent. Add a warmer ambience, and you’ve got a truly remarkable eating experience! I should add that Chef Guillaume did make a visit to the table near the end of our meal, and we had an interesting chat about Hong Kong’s food scene versus Macao, as the last time we met had been at his previous restaurant, The Tasting Room (in Macau).