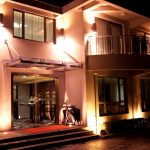 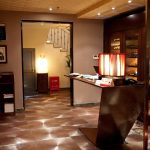 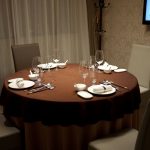 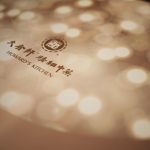 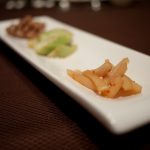 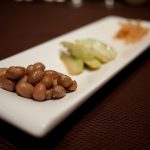 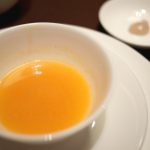 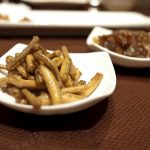 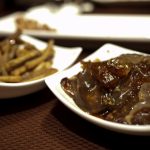 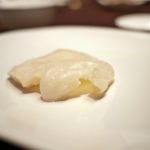 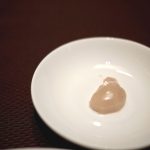 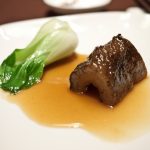 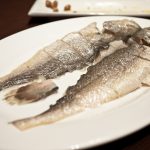 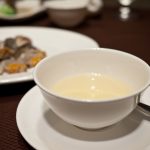 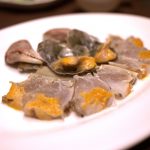 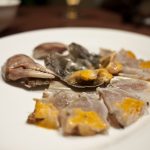 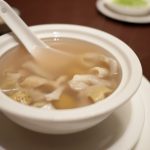 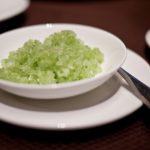 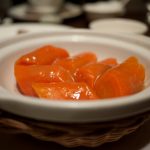 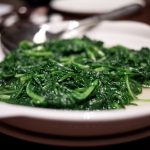 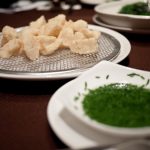 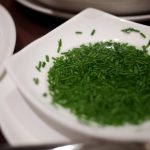 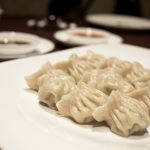 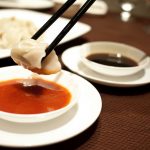 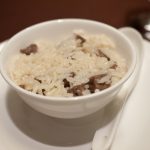 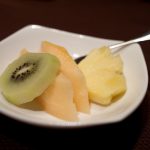 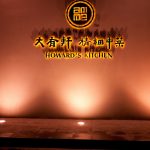 Image 1: Not sure which area it was, but it seemed to be a residential area. We basically hopped on a taxi from our hotel and showed the driver the restaurant's address.

Image 2: Friendly welcome by the staff at the reception area. They then led us to the dining rooms upstairs.

Image 3: Again, like many restaurants we visited in China, the restaurant consisted of only private rooms.

Image 4: House 2, Lane 1829 Honqiao Lu, Shanghai 021-6275-7978
It's not a surprise that Howard is the owner of this restaurant. He's originally from Chaozhou but spent a lot of time in the US. Being a food lover himself, particularly seafood, he opened up this place serving high quality Chaozhou style seafood.

Image 5: This place serves high-end Chaozhou cuisine, a regional cuisine of Canton. They already brought out some amuse bouche even before giving us the menu. This dried cuttlefish was a very good start!

Image 6: Plain boiled peanuts and pickle garlicky vegetable. Chaozhou cuisine is all about quality ingredients. The manager came in and we basically took her suggestions of small plates followed by some of their signatures. She said it would be sharing style, enough food for four of us and about CN¥800 per head. We liked her honesty of mentioning the price prior.

Image 7:
Before the first course, one more surprise - a warm tomato and potato creamy soup.

Image 10: One of the highlights - Sea Whelk! After puttin it into our mouths, we all reacted the same way - "Wow"! It was mild in flavour but the thin broth coatin acted as a light seasoning. Moreover, the freshness, the soft crunchiness, and the purity of the ingredient were simply amazing. The only complaint was that each of us had only two tiny pieces!

Image 11: It is served with mustard sauce which was not needed at all as it was way too strong for such a beautiful ingredient.

Image 12:
Braised sea cucumber was alright. Again, the portion was way too small.

Image 13: Don't let the unpleasant look fool you, this chilled fish, shared by four of us, was another great dish of high quality ingredient. It had a thin jelly on top made from its marinate. Delicious!

Image 14: The sauce for the next course, which turned out to be the best dish of the meal, and probably one of the top ten dishes of the year.

Image 15: Chaozhou chilled crab Yes, it looked raw because it was raw! The juicy meat was already saturated with flavours, no need for vinaigrette spicy dipping at all. The yellow bits had deep flavours resembling sea urchin. A beautiful dish! People often have stomach problem after having Chaozhou raw crab but here they sanitize the crabs for 72 hours.

Image 16: Both the whelk and the crab were very addictive food! Though the crab was one of the best I ever had in my life, again, my only complaint is the portion was too small! Why four of us had to share such a tiny crab? I later checked the menu, each crab was only CN¥300 each! Our food bill was CN¥800 X4 = CN¥3200!

Image 17: The peak of the meal was over, the rest of the meal was ordinary, not bad, but ordinary. Similar to other meals we had in China, big timing issue -- all the previous dishes arrived and we finished within 30min, but then we had no food for 30min after this soup.

Image 18:
Interestin shaved celery as a condiment for the soup

Image 20:
And a very bland spinach

Image 22:
A very acidic dipping for the tofu.

Image 25: Our food disappeared again! We waited for another 20min before this foie gras baked rice arrived. It was my first time having foie on rice and it was pretty good.

Image 26: That's all to our meal. The whelk and crab were exceptional. but it was unacceptable that we were still hungry after paying almost CN¥4000! In terms of service, the staff at the reception and the manager were very friendly, but why did they hire such a robotic waitress who had no facial expression at all? Absolutely scary!

Image 27: The timing problem is a big problem we have experienced in Chinese restaurants, even at high-end places. They could have asked the diners if they preferred the Chinese style where all dishes were pretty much ready at once, or the banquet tastin style. Only a few restaurants we visited made an effort to deliver a smooth meal.