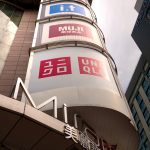 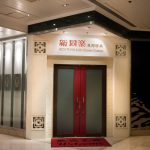 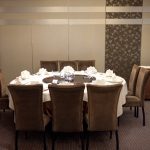 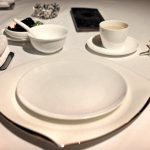 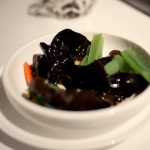 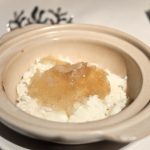 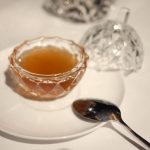 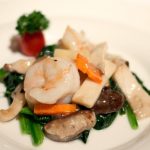 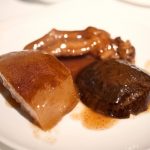 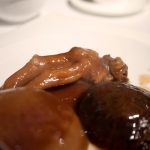 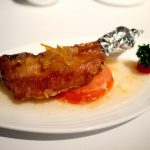 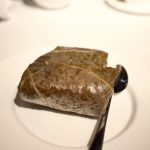 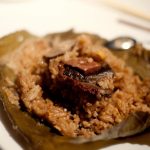 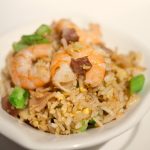 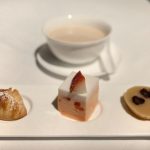 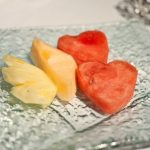 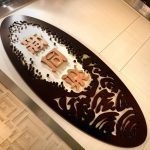 Image 1: The Sun Tung Lok group has more than 40 years of history serving fine Cantonese cuisine. Now situated on the 4th floor of Miramar Shopping Centre, it was the first non-hotel Michelin 3-star in Hong Kong.

Image 3: The main dining room was packed for most weekday lunch, but we got a separate room which was nice and quiet with only four tables.

Image 4: The multi-course set menu all had a shark's fin soup; the main differences among the menu choices were the quality of the fin, and also the expensive ones had an abalone course and a bird's nest dessert. We went for the cheapest menu as we were not prepared to spend over USD$1000 on an abalone.

Image 5: A small plate of black fungus and celery sticks before the first course.

Image 6: The first course was braised superior shark's fin soup. The manager carefully presented us the pot containing the fins topped with egg white before warming up the Yunnan ham soup on the side.

Image 7: He then served me a small portion of the soup to ensure I liked the concentration before incorporating it with the fins. This was an extra portion of the reduced soup base in case I preferred more intensity. Superb service here!

Image 8: The soup was all about the deep flavour of the ham. As Ivan Li mentioned to us before, this fin preparation, which is common in Hong Kong, results in tasteless fins, unfortunately.

Image 9: The next course was sautéed prawn with mushroom and vegetable. Both the prawn and the Chinese mushroom were excellent but the vegetable underneath soaked up all the grease which was unpleasant!

Image 10: Braised pamelo skin with shitake and goose web turned out to be a surprise. The fruity flavour of the skin disappeared but the pamelo aroma remained, along with its soft texture, this skin was a delicacy!

Image 11: And the foot, though looked disgusting, wasn't bad either; bones came off easily leaving the soft skin in my mouth. A very good course!

Image 12: As with most Chinese restaurants, there was no communication between the kitchen and the front of the house. Our roasted spare rib already arrived before I finished the previous course. Glad that it was still delicious -- crispy skin with a nice blend of fat and meat along with the lovely sweet grapefruit sauce!

Image 13: For the rice course…

Image 14: ... lotus leaf rice which I had to complain as it had a sour taste, especially the mushroom!

Image 15: They then replaced it with a fried rice with dried scallop, ham and prawn. The fried rice wasn't greasy at all and the rice wasn't sticking together; I could feel each grain in my mouth, very enjoyable!

Image 16: A combination of desserts - cashew nut cream soup which was bland and runny instead of nutty and creamy; sweet cookie was perfect, warm and crumbly; papaya mousse and the traditional red bean custard were wonderful as well.

Image 18: I have no idea which aspect of this restaurant would deserve 3-star. There were one or two outstanding items, but many flaws throughout the meal. Glad that it got demoted to 2-star.