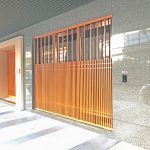 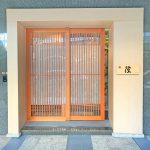 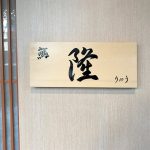 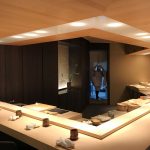 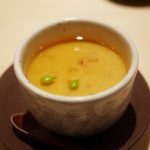 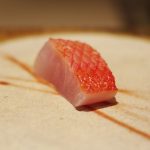 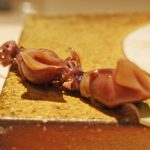 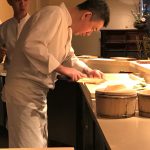 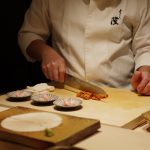 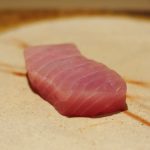 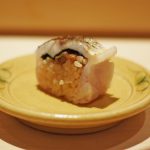 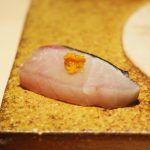 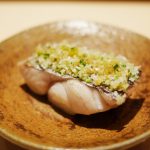 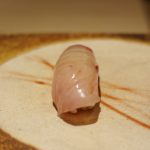 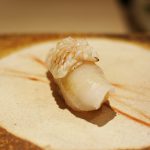 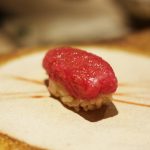 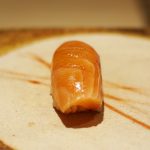 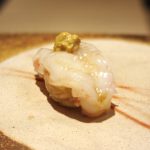 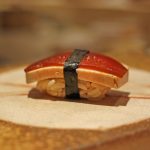 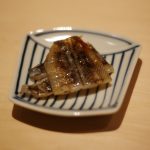 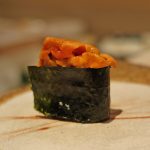 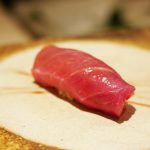 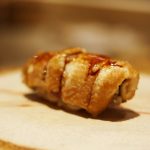 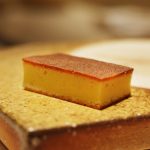 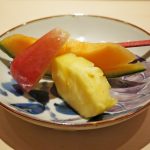 Browsing the Michelin Taipei list, we found three sushi restaurants with a 1-star status: two are run by a Japanese chef and one, Sushi Ryu, by a local Taiwanese. And we couldn’t help wondering if there were any differences in quality between Taiwanese and Japanese interpretations of sushi. There was only one way to find out, so – as we had plenty of time before our flight – we decided to stop at Sushi Ryu, enroute to the airport, for lunch.

With its wooden panels, the restaurant looks authentic enough from the outside, and – when inside – this impression of authenticity is enhanced by warm greetings from the staff, a genuine sushi countertop, and an omakase menu that offers three price-based choices, just like the high-end sushi you get in Japan. To ensure that only high-quality seasonal fish is served, the restaurant gets deliveries three times a week from Japan. I opted for the middle-priced menu, which looked more than enough to fill me up!

Owner Chef Yonglong had a multi-tasking role, not only making each piece of sushi, but giving instructions to his two assistants while constantly socialising with customers. It was clear that he really cares about his diners. Whenever I looked curious, for example, he came over and gave me a detailed explanation of the dish. If, on the other hand, he suspected (by my facial expression, perhaps) that I wasn’t 100% happy, he would ask what the problem was – too much wasabi, maybe, or too much soy sauce? On the occasion when I got up to visit the restroom, he immediately asked a member of staff to guide me. He constantly monitored every diner to make sure they had a positive experience.

I suppose, if I were being picky, I’d have to say that Chef Yonglong’ technique isn’t as formal and rigorous as you find in top Japanese sushi places. Although we both had the same set of sushi, for example, the size and thickness of fish were not always the same between our pieces. But this didn’t stop me from enjoying the quality of sushi – in particular, the silky ankimo marinated fragrant miso paste and the creative smoked sawada with yuzu puree. A few things didn’t quite work for me, such as the pickled radish underneath the tuna, which was overwhelming, and the anago, which hadn’t been grilled on charcoal and had been soaked in an overly sweet sauce.

In accordance with the custom in Japan, whereby the chef often accompanies diners as they leave, Chef Yonglong followed us out and, before we could stop him, helped us to load our luggage onto the taxi. I felt very embarrassed and apologised. After all, that wasn’t his job. But he was very relaxed about it, joking that he wasn’t that old, and that lifting a suitcase or two wasn’t a problem. As the taxi pulled away, we waved at each other – what a friendly way to end an enjoyable meal!