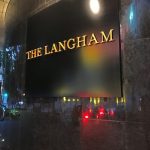 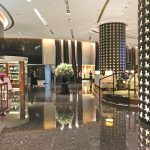 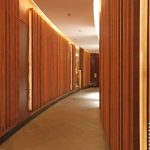 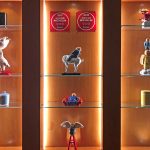 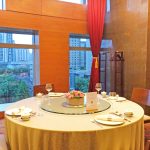 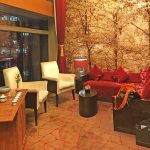 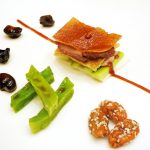 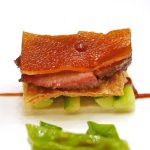 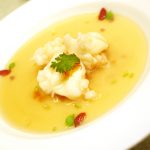 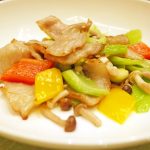 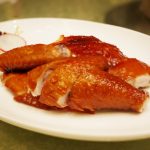 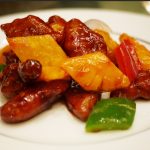 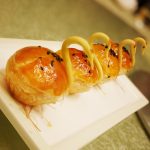 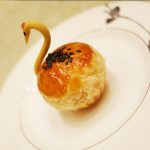 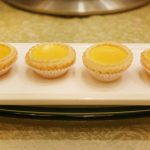 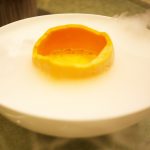 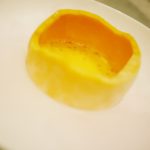 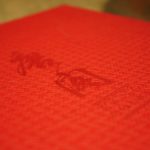 Image 1: Note: Demoted to Michelin 2-star shortly after this visit.
T'ang Court is the signature Cantonese restaurant of the Langham Hotel Group. This caused a bit of a stir when, in 2016, the flagship branch in Hong Kong was awarded Michelin 3-star status, as the title of "Best Cantonese restaurant in Hong Kong" was a tribute that most foodies weren’t prepared to pay to an ‘ordinary’ 5-star hotel eatery like T'ang Court.

Image 2: And the issue was complicated further when Shanghai’s first Michelin guide appeared in 2017, as the local T'ang Court was also awarded 3 stars – the only establishment in mainland China to earn such an accolade. As the entire world already has doubts about how Michelin applies its standards, this decision cast the dark shadow of suspicion on the relationship between the Langham group and Michelin. But who knows? I guess it’s just another of Life’s unsolved mysteries.

Image 3: Located on the 5th floor of the hotel, the restaurant consists of 9 private rooms, all branching off from a long corridor with a small common dining area at the far end.

Image 4: A showcase of Michelin 3-star awards, along with various cartoonised porcelain figurines of someone who looked suspiciously like Deng Xiaoping, the former leader of the People's Republic of China. A nice display of humour – not to mention bravery! – from the artist.

Image 5: If you’re the type who likes a bit of privacy when dining, this place is perfect for you. Although the restaurant was fully booked that night, we saw none of the other diners as we were given a private room with a dedicated waitress.

Image 6: We even had our own lounge area and ensuite restroom. There aren’t many city restaurants that can find this kind of space, so it naturally comes at a cost – a point which becomes evident the instant you open the menu! And it’s worth noting that getting a table wasn’t easy – we had to email them a month ahead and follow it up with several more phone calls! I guess this is understandable, as they don't need many customers to fill the place up for an evening.

Image 7: We began with a Cantonese BBQ platter. This may sound pretty ordinary, but it wasn’t – it consisted of a piece of char siu, a piece of suckling pig crispy skin, a slice of bean curd skin and cucumber, all stacked on a base of Chinese bun. The plate was decorated with caramelised walnut, strips of beans and tiny black fugus. The textural contrast of this mix was nice, and it oozed creativity, but I was less than impressed with the portion size.

Image 8: Usually, a BBQ platter would be a dish full of mixed meats. Here, was a piece of char siu and a fragment crispy skin! True, it was nicely presented, but does the injection of a bit of creativity really justify a price of US$25 for each portion? I mean, as it was one plate per person, the four of us paid a total of US$100 just for a couple of bites. To be fair, I guess that, if your going to devote an entire hotel floor to a kitchen and 9 private rooms, you need to charge a premium - especially when the hotel is in the middle of a major city.

Image 9: Next up was a signature dish of red lobster from the US, served on baked egg white with sea urchin and a layer of ham reduction, then garnished with goji berries. The sea urchin was from QianDao, and had quite a weak flavour, but the lobster was carefully cooked - perfectly tender and meaty, with no toughness whatever. But what really made the dish was the (Jinhua) ham reduction, deep in flavour and just thick enough to coat each bite of lobster. This dish was US$55 per person. So, by now, it was clear that, at this place, it wouldn’t be hard to spend a fortune.

Image 10: But we managed to keep a grip on ourselves and, apart from the two expensive courses just described, we opted for a selection of sharing style meat dishes, offering bigger portions, to keep our bill on the saner side of huge. Before these, though, we had soup of the day - winter melon and duck - very homey and comforting with no hint of greasiness. Then came the first meat course: a simple stir fried Kurobuta (Berkshire) pork with vegetables. This was well seasoned, and each slice had a nice blend of fat and meat – a most delicious course indeed!

Image 11: We tried a couple more dishes, just to reassure ourselves that the kitchen could produce the kind of food you can order in any Chinese restaurant. One of these was Crispy Chicken, which was also nicely done – the meat was juicy , while the skin was thin and crispy without being greasy. In short, excellent!

Image 12: Then what must be the most popular of Chinese dishes - sweet & sour pork. Whatever Chinese restaurant you eat this in, you’re likely to find that the pork – whether soft or crispy – wears a coat of thick batter. Here, though, it was different – crispy, for sure, but without the expected batter. It was more than just beautifully done - I’d go as far as saying that it was the perfect sweet & sour pork!

Image 13: We had a selection of desserts – starting with egg yolk puff, presented in the shape of a swan. With a warm, salted yolk at its centre, it exactly what I look for in a egg yolk pastry. Fabulous!

Image 16: And now my favourite Chinese dessert - egg tart. Nice, flaky pastry, not greasy in the slightest, and with a warm running centre. Another wonderfully executed course!

Image 17: As a finale, they offer a rather theatrical version of one of Hong Kong’s most popular contemporary desserts - mango-sago-pomelo soup. However, instead of serving it in a normal bowl, it was served in a ball of mango ice cream, with smoke emanating from underneath. (Far from the first time on this trip that we’ve encountered dry ice – there seems to be no escape!). The idea is to break the sphere into pieces and mixed with the soup.

Image 18: It’s a fun idea, great to look at, and textural effect from the pieces of ice cream works well. However, no mango-sago dessert can be at its best unless the main player – the mango – has a sweet and strong flavour. Sadly, that wasn’t the case here - the quality of the mango wasn’t up to the required standard, making the dessert bland and weak.

Image 19: Surprisingly, perhaps, the overall bill wasn't too crazy. In fact, if you exclude the lobster and the BBQ meat, it would be similar to other high-end restaurants in town. Given that we had a private room, and enjoyed flawless Chinese food with a professional service, it’s actually a pretty good deal. If you’re on a budget, do be conscious of what you order. If you avoid any live seafood, or delicacy like Shark's fin, and skip their hugely marked-up wine list, you’ll find yourself enjoying perfectly-cooked Cantonese classics at a reasonable price in exquisite surroundings.