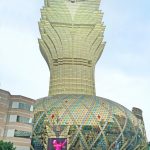 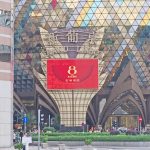 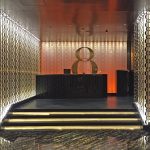 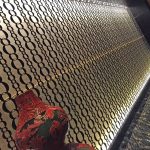 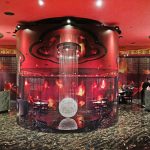 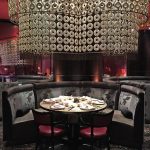 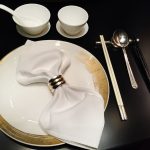 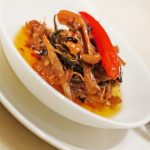 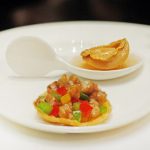 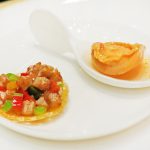 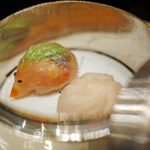 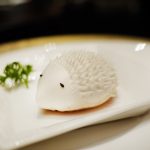 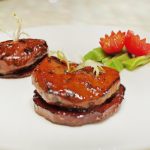 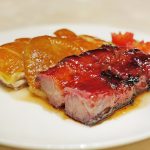 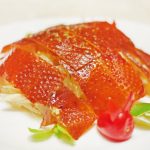 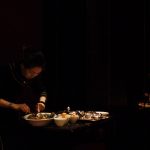 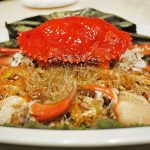 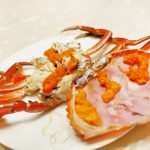 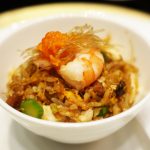 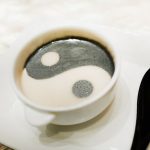 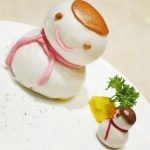 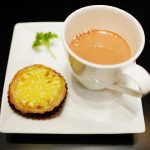 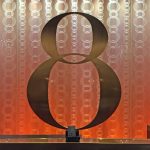 Image 1: For my second experience of Grand Lisboa (see my first experience), I’ve come to the hotel’s other Michelin 3-star restaurant, specialising in Cantonese cuisine. It’s called The Eight, which sounds a bit strange until you realise that eight is a Chinese lucky number. They love to see it – especially in the casinos! So, when you think of it, it’s quite a clever name – by coming here, you’ve hit the jackpot! Mind you, perhaps it’s possible to go too far – the hotel telephone number is 2888 3888!

Image 2: So, yes, and odd name at first glance, but simple and clever on further thought. And they’re obviously proud of it – hence this massive screen bearing the name.

Image 3: When you step out of the lift on the 2nd floor, you’re not left in any doubt that you’re in the right place. In fact, the ‘8’ motif is…

Image 5: At last, some relief from lucky numbers! Or so I thought. But no, not really. The incredibly spacious dining room is just behind the reception area and is themed with goldfish, another symbol of luck for the Chinese. It’s one of those feng shui things – they’re supposed to bring you luck in the form of tranquillity, wisdom and wealth.

Image 6: The more I study the décor here, the more I notice the "wealth" symbol. Even the white circular disks hanging from the ceiling are shaped like an ancient Chinese coin! It’s certainly an impressive and nicely arranged room. Unlike most Chinese restaurants, where you find any open dining area packed with tables, the layout here gives each table some private space.

Image 7: Chinese cuisine has a sharing culture, so there’s often a large portion of whatever dish is being served at the centre of the table for everyone to dig in. Not so long ago, each diner would have been given just one pair of chopsticks, for use with their own plate and for the shared dish. Nowadays, for hygiene reasons, many upscale Chinese restaurants provide two pairs of chopsticks for each person, one for getting food from shared dishes, the other for eating with.

Image 8: Usually, with Cantonese cuisine, salt and pepper is replaced by mustard and hot sauce. High-end establishments often have their own homemade XO sauce, which is basically a good-quality spicy oil with dried scallop and shrimp. Here, they had added wild mushroom too. As for our menu choices, the dim sum had been pre-ordered since we had been invited to the meal together with ChickenScrawlings.com, but I decided to order a few sharing dishes from the a la carte menu.

Image 9: As we were enjoying our warm tea, a welcome selection of snacks was served. The corn cracker was loaded with a mix of minced pork neck meat and colourful mixed peppers. Crunchy, peppery, garlicky…definitely a nice start. On the spoon was…

Image 10: …a chilled whole abalone on yuzu jelly. A soft but crunchy, fruity and refreshing bite.

Image 11: Wow! Everything is posh here! Instead of the traditional bamboo steam basket, the dim sum came in a classy silver basket! It carried two items inside - the goldfish shape is shrimp dumpling that certainly had a nice crunchy texture, though I didn’t really get much of a sense of freshness – despite their insistence that they used only sashimi-grade shrimp. The cuttlefish shape was filled, appropriately enough, with cuttlefish paste. This too, had a nice bouncy feel. Unfortunately, all I could taste was the heavily dominant spicy satay sauce.

Image 12: Traditional Shanghainese soup dumpling uses cheap pork. Here, though, being an upscale place, lobster was used instead – and they were pretty generous with the lobster meat. Each morsel was very juicy and the delightful lobster flavour really did come through. It turned out to be one of my favourite items of the meal. The other dumpling - diced pork with mushroom - went well with the tasty XO sauce. The dumpling skins were all well-made – not too thick or overly sticky, and strong enough to keep the dumpling itself intact.

Image 13: Apparently, they love to present their dim sum as animal shape. This, for example, is a traditional char siu bao, but meticulously made into a porcupine! It contained pieces of char siu, as well as some preserved vegetable, and had been finished on a pan to create a crispy bottom that contrasted with the fluffiness of the bun itself. Lots of sauce burst out when I bit into it. So… fluffy on top and crispy underneath. Another favourite!

Image 14: Here’s a modern twist to the classic "Gold coin chicken". Instead of using chicken liver, they had used foie gras with a thin slice of char siu on a base of preserved Chinese sausage. With just the right amount of fat, it wasn’t the slightest bit heavy, and the sausage had great depth of flavour. The sauce had a touch of sweetness and, overall, the dish had a nice mix of textures.

Image 15: Of course, we simply had to sample their Cantonese BBQ while we were here, so we picked Soy Sauce Chicken and Char Siu. The chicken was well marinated with good meaty texture, fresh chicken possibly from that morning or just the day before. The char siu was the traditional "pork butt" cut (top of the shoulder) which had a small, but nice, patch of fat. Both were pretty decent!

Image 16: One of the main courses was the Pomelo chicken. Under a thin and crispy blanket of chicken skin was shredded chicken meat, mixed with lots of pomelo and a touch of honey and lime sauce. I loved the fact that the skin wasn't at all greasy, but I found it a rather dry dish overall. There was much more pomelo than chicken, and while the pomelo was of good quality - sweet without any trace of bitterness – the whole thing was, frankly, a bit boring.

Image 17: The service was flawless throughout. Here, the waitress is carefully unwrapping a lotus leaf before presenting us with a huge plate of food, which was…

Image 18: …this! All these goodies had been wrapped in a lotus leaf before being finished in a steamer. There was rice and glass noodle stewed with chopped vegetables, egg white, shrimps, char siu and vegetarian shark's fin – all topped with a whole crab. What a presentation! Simply brilliant! As a bonus, there was a lovely fragrance from the lotus leaf.

Image 19: It was a very good-sized crab, not short of tasty roe. Delicious! As everyone was getting a bit full by now, I think I was pretty much the only one who finished it all. Well, somebody had to, it’s only polite!

Image 20: I also managed the extra bowl of rice, before moving on to sampling a few desserts!

Image 21: This chilled custard of black and white sesame was presented in an interesting ying-yang style! Mild, and not over-sweet, I could easily taste the sesame. Enjoyable.

Image 22: Aww, cute! These warm red bean custard buns had been made into a snowman. They seem a bit obsessed with making food into shapes – not sure why. A bit strange. Still enjoyable though.

Image 23: And now, to finish, a small reminder of Macau’s history - Portuguese tart with roasted milk tea as a petit four. The tart’s base was flaky without being too oily, and the egg custard was creamy without being too heavy. The milk tea was very high quality too. A great finish to our meal!

Image 24: Final thoughts? Not sure... Chinese food is Chinese food. Even when it’s Michelin 3-star, really not much to write home about. For sure, the kitchen worked hard to make each dim sum look cute, and not without some success. The food wasn't exceptional, but it was certainly still very good overall. Moreover, it’s a beautiful restaurant to dine in. All the dim sum were fairly priced for a 5-star hotel, and the service was smooth and attentive. In short, if you’re looking for a nice Chinese restaurant in town, you should consider here.