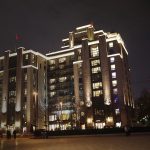 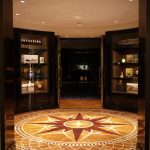 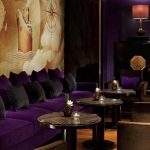 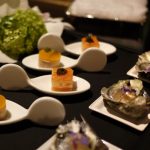 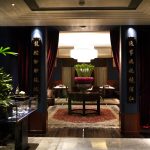 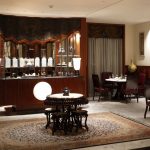 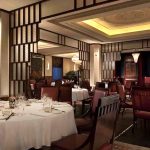 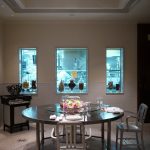 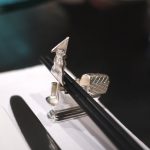 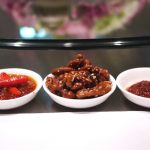 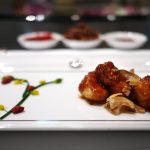 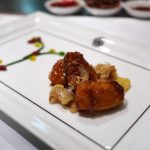 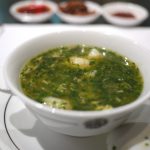 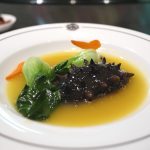 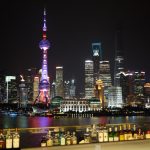 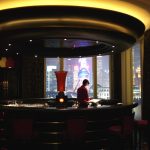 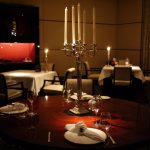 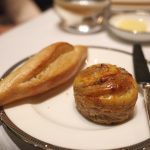 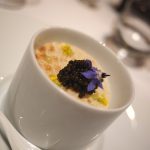 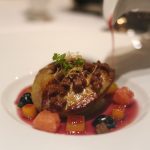 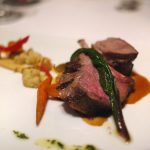 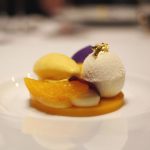 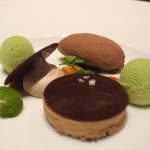 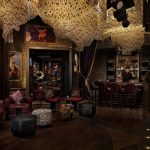 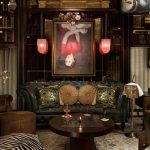 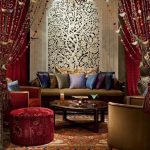 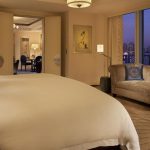 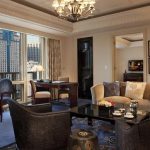 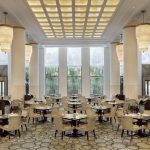 Image 1: The Peninsula Hong Kong, known as the Grande Dame of the Far East, was opened in 1928 but it wasn't until the last few decades that it expanded globally. Prior to the opening of The Peninsula Paris in August of this year, the latest addition of its collection was in Shanghai five years ago. For a greedy foodie like me, instead of picking one of their restaurants, I decided to try them all IN ONE NIGHT!

Image 2:
My first stop was to savour some canapés at the ground floor bar, The Compass Bar.

Image 3: Dominated by the deep purple and navy décor, this bar pays homage to nautical history. Note that there is not an indoor smoking ban in China, so if you don't prefer the strong smell of cigars, the rooftop bar would be a great alternative.

Image 4: Accompanying my glass of The Peninsula Brut was a small tray of amuse bouche - smoked salmon with fresh cream, kumamoto oyster with pear jello, and foie gras terrine with mango. What a lovely treat to start my evening!

Image 5: The first half of my dinner was Chinese at Yi Long Court located on the second floor of the hotel.

Image 6: If you have been to China, you probably know that the tea culture is comparable to the wine culture in the West. Most restaurants offered a wide range of tea, both in variety and in price. Here, they even have a spacious area next to the entrance dedicated to the art of tea drinking!

Image 7: From a quick browse of the menu, the restaurant focused on Cantonese cuisine but also featured other regional Chinese specialties including Peking Duck.

Image 8: I was very lucky since the chef's table private room was vacant so I was allowed to have my meal there! This room offered the best front seat if you wanted to witness the full kitchen action.

Image 9:
It even had a live video stream to make sure guests don't miss any crucial steps of the cooking. It added another dimension of immersion into the kitchen at the comfort of your table. Very innovative!

Image 10:
This cute chopsticks holder reminded me of the traditional boats in Hong Kong. This was an example of the fine attention to detail that sets this hotel apart from the other fine hotels.

Image 11: Served on the table were XO sauce (a Hong Kong spicy sauce with dried seafood), caramelized walnuts with sesame which were divine, and chili paste.

Image 12:
What an elegant artwork composed of chives and goji berry to begin my dinner!

Image 13: Garnished with caramelised lily bulbs were chunks of lightly deep fried cod coated with sweet and spicy sauce. Crispy and saucy crust followed by a flaky and moist centre. I could feel both the vinaigrette and sweetness "yin-yanging" on my tongue. Perfectly executed! This was my favourite of the evening.

Image 14: Since it was the hairy crab season, the chef prepared crabs sourced at the YangCheng Lake near Shanghai. Instead of serving the whole crab which would be very messy to eat, he extracted the roe into a thick soup of seafood and shepherd's purse, also known as Chinese cress.

Image 15: Of course, I couldn't leave China without trying a traditional treasure - braised sea cucumber. As with most Chinese delicacies, this velvet sauce was as important as the prized ingredient itself. I loved the unique soggy-jello-like texture of sea cucumber. Moreover, the creamy and savoury sauce was packed with flavours of chicken and cured Yunnan ham. A superb course to wrap up the Chinese section of the meal.

Image 16: The next stop was all the way to the top for the most spectacular view from the rooftop bar, Sir Elly's Terrace; a spot definitely not to be missed. I strongly suggest coming here before 9pm as most buildings in Pudong area don't remain lit up all night!

Image 17: After a quick cocktail, I was ready for the second half of my dinner at the Art Deco restaurant Sir Elly's just one floor down. The stylish bar of the restaurant would be a good alternative to the rooftop bar as it also provided a direct view of the Oriental Pearl Tower whilst being cosy and atmospheric inside.

Image 18: This Crown Jewel of the hotel has a very romantic dining environment with candlelit tables. In China, the locals begin their dinner quite early, hence the dining room was already half empty since the first round of rush was already over.

Image 19: The second part of my meal began with a warm cheese & onion brioche and a crispy French baguette.

Image 20: It was really my lucky day! I even got to sample the first batch of Chinese Beluga! Yes, that's correct, the first harvest of Beluga caviar in China after 15 years of sturgeon farming. Paired with potato espuma, quail egg, and Melba toast, this caviar had a deep flavour without being overly salty nor fishy; very clean finish! Surprisingly excellent quality I have to say!

Image 21: One more starter before the meat, duck foie gras, which was again surprisingly of very high quality too! It was briefly seared and served with cubes of Asian pear in Sangria sauce topped with ginger bread crumbs. I later found out the foie gras was produced by the Chinese operation of Rougié, the leading French foie gras producer, no wonder! There seemed to be a clear drive to produce Western delicacies on Chinese soil in recent decades.

Image 22: For main course, a beautifully looking Silere Merino lamb rack and shoulder accompanied by baby carrot, chick pea, and drizzled with preserved lemon jus. As the meat was gamey while the shoulder too dry and tough, this was the least favourite course of the night.

Image 24: Last course of my long dinner, a powerful Coffee theme finale consisting of caramel, honeycomb, and chocolate mousse! A very satisfying evening so far but it didn’t end there!

Image 25: To end the night, nowhere in Shanghai could be more glamorous than the Salon de Ning, a speakeasy style basement lounge with hypnotic ambience inspired by the fictional 1930s Shanghai social butterfly Madame Ning!

Image 26:
If the alcohol wasn't enough to make you tipsy, this extravagant "up-side-down" room would!

Image 27: There was even an Indian-themed room showcasing artefacts collected by Madame Ning during her world voyages! A very impressive, unique and exclusive space to spend the night with live music.

Image 28: Finally, the last stop of the night was my deluxe garden suite featuring magnificent views over the gardens of the former British Consulate. A luxuriously designed space with exotic woods, black lacquered furniture, marble bathroom and a separate living area with a grand mock fireplace. I seriously was indulged and seduced by The Peninsula Shanghai!

Image 29:
The only sad thing was that I had to leave with an early morning flight the next day.

Image 30: And last but not least, to complete my visit to all the dining venues of the hotel, my final meal of this trip was breakfast at The Lobby before my early 8am flight! This was definitely the most memorable dining experience of my China trip visiting six unique venues in less than 12 hours!