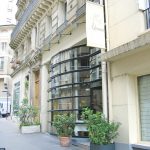 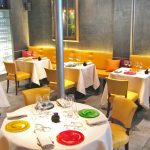 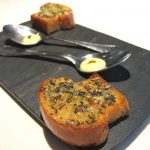 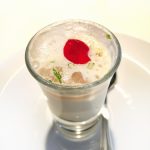 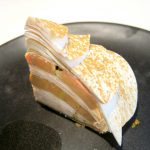 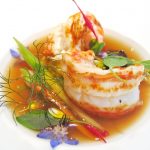 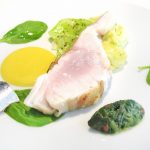 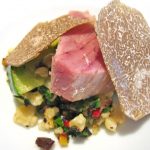 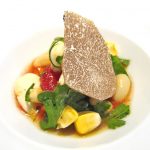 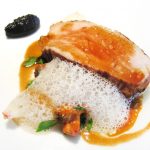 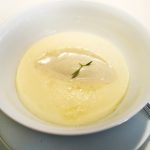 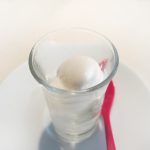 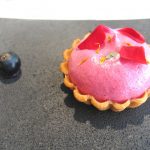 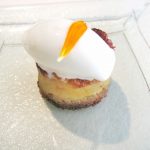 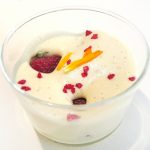 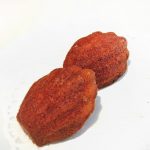 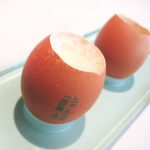 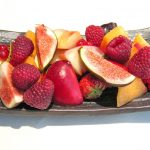 Image 1: Pascal Barbot is a former student of Alain Passard, who runs L'Arpege where – coincidentally - we’d had a terrible meal the night before, but we were determined not to let this influence our judgement. Chef Barbot loves his vegetables – a passion that dates back to his youth, when he spent a lot of time gardening.

Image 2: After working in many restaurants, including 5 years with Alain Passard, he opened his own place in 2000, achieving the ultimate 3-star accolade after 7 years of hard work. As at L'Arpege, the dining room wasn't very big, but it was much more colourful. Plus, as the menu was almost half the price of the previous night, I was certainly not complaining.

Image 3: Also, the team was much younger and friendlier. After a short chat about our Paris food trip, this arrived - two lightly toasted, and still warm, brioche garnished with rosemary flakes and accompanied by a spoonful of lemon butter. Mouth-wateringly aromatic. Great start!

Image 4: Now another amuse bouche before the first course. It was a shot glass of cauliflower cream and yogurt, decorated with a rose petal. . Flavour-wise, the cauliflower and yogurt blended very well. Excellent!

Image 5: Their specialties – a unique-looking White Mushroom Pie - slices of foie gras terrine, sandwiched between layers of thinly-sliced white mushrooms, with drops of hazelnut oil. Foie paired with mushroom - first time I’ve come across this combo! But it worked – and how! The mild earthy mushroom absorbed the richness of the smooth foie without taking away foie’s identity. The citrus jam provided a great taste contrast. Superb! True genius!

Image 6: A beautifully presented pan-fried langoustine surrounded by mixed mini vegetables and flowers, and finished with a vegetable broth. Exceptionally tasty and harmonious – even if one of our langoustines was just a little overcooked.

Image 7: This fillet of local river fish is resting on cabbage leaves and red pepper, with a lemon and ginger dipping sauce, and accompanied by a little spinach and sardine. The fish was perfectly fried, with a nice pink centre, but the sauce was way too strong and overpowering.

Image 8: Pink tuna steak embraced by two generous flakes of summer truffle. Hiding beneath are fragments of cauliflower, cucumber, red pepper, and olive. Rather a disappointing dish, this – the seared tuna was far from the best, and the vegetables were pretty ordinary, too.

Image 9: A simple salad course – a mix of tomato, corn, bean, and fresh almond, topped with another generous slice of truffle. Colourful and a fun combination of textures, but taste-wise rather boring.

Image 10: Veal, with a delicious black truffle sauce, accompanied by black olive paste, porcini, diced truffle sauce and red onion. It was OK, though the meat wasn’t as tender as I had expected.

Image 11: And now…the “guess dish of the day” – we had to tell the waiter what it was. Tricky! From its appearance, it looked like a dessert course, but it had a light sourness about it which contrasted with the sweet creaminess at the centre. The texture was a giveaway, though - it was obviously mashed potato –they’d disguised it by blending it with cheese and vanilla ice cream. An interesting – and brave - combination of savoury, cheese, and dessert!

Image 12:
Before dessert, a small and refreshing yogurt sorbet.

Image 13:
This buttery tart base was filled with a foamy raspberry mousse that had an intensely fruity flavour. Lovely!

Image 14:
It was followed by red fruit cake, topped with lemongrass pepper ice cream. Very stimulating - cold and spicy, but refreshing at the same time!

Image 15:
The final dessert was strawberries floating in banana sabayon. A beautifully balanced dessert – light and without too much sugar. I was surprised that all desserts were fruit-based, and had no chocolate. Unusual, that!

Image 18: Wow! He obviously loved his fruits! This vivid plate of seasonal delights concluded our long lunch. And it was a modern and light meal, unlike many other French meals we’d had. But other than the white mushroom pie, I wasn't really that impressed with the other courses. Maybe my expectations were too high. Still, it was half the price of the night before, so I was pretty happy by comparison!