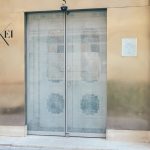 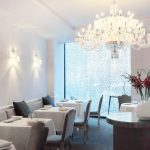 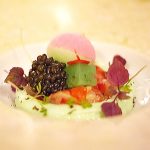 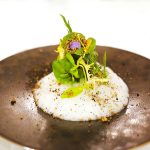 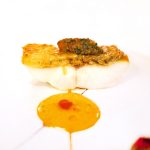 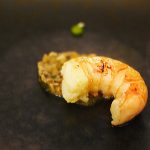 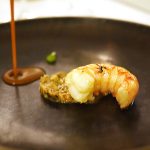 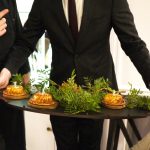 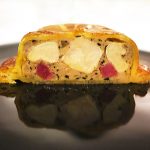 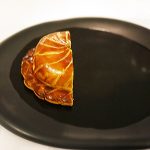 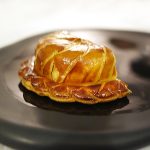 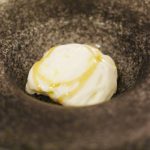 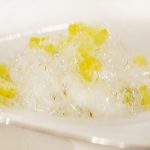 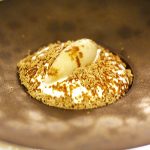 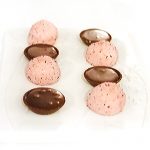 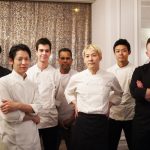 The French and the Japanese have been leaders in the world of gastronomy since, well, pretty much forever. So when you find yourself in a Paris restaurant, run by a Japanese chef and boasting two Michelin stars, you know one thing for sure – you’re in for a treat!

Actually, I’ve known about Kei for a long time. But there are so many Parisian restaurants on my “must visit” list that I’ve never got around to this place.  Recently, I decided that I couldn’t put a visit off any longer – I decided to make eating at Kei a priority. I’d make a special journey. I was confident that it would be worth it – after all, before opening this restaurant, Chef Kei had gained more than a decade of cooking experience in many top French kitchens, including Alain Ducasse.

I had decided that I’d make my visit by participating in a special event, organised by Journey to the Stars – the idea was to create a special “Best of Kei” menu to showcase some of the restaurant’s signature dishes. It sounded good, and the experience began with a champagne reception and a tour of the kitchen – before the kitchen team was tested to the full by being asked to serve 32 diners simultaneously. It was the first time the restaurant had attempted such a feat, because – as Chef Kei explained – their largest table is for eight, which was the most they’d ever served in one go. But his team was ready for the challenge!

“The prawn itself was moist and juicy”

While we were all enjoying a glass of De Sousa blanc de blancs, a small cube of red shiso ice was served on a little spoon. I can’t say I enjoyed it, as it had an unpleasantly sharp, vinegary taste – and the following morsel wasn’t a whole lot better. This was a cube of cucumber, topped with a thick sauce of red miso and sesame – I felt like I was eating a strong miso paste. There was also a deep-fried prawn, intended to be eaten whole with its shell and head. Unfortunately, my prawn was rather dry, while the shell wasn’t crispy enough to be enjoyable.  All in all, then, not the most promising of starts!

Once we were seated, the ‘real’ meal began. Japanese chefs are expert at highlighting the freshness of quality seafood, and the first course was a great example. It was one of my favourite seafoods – Carabineros red prawn – served on a bed of green apple and earl grey mousse, topped with a shiso-apple meringue sphere and Kaviari caviar from Schrencki sturgeon farmed in China.  In recent years, many of the top Paris restaurants have been using caviar from China, including Alain Ducasse and Robuchon, and I liked the fact that it (the caviar) was very light in salt, just enough to bring out the freshness of the prawn – had it been saltier, it would probably have killed the dish.  The prawn itself was moist and juicy, a sign that it had arrived that day. Nicely balanced with the sweet and fruity mousse, the result was a very elegant course.

Which, I have to say, was a big contrast to the Alain Passard (Michelin 3-star L’Arpege) salad that I’d had at lunch that day. True, the ingredients were similar, but this one was much more sophisticated in terms of both preparation and presentation.  Hidden beneath some foam of rocket and a neat stack of crunchy vegetables, this garden salad consisted of Scottish smoked salmon, dressed with a lemon emulsion vinaigrette of tomatoes and black olive crumble. There were so many different components to the texture of this salad that it was a little confusing to start with, but the creamy emulsion did a great job in binding everything together.  A truly original salad dish!

After this complex dish, the next two courses couldn’t have been more different – they looked simple to the point of minimalist. But appearances can be deceptive. First up was a plain-looking roasted sea bass which had, in fact, been prepared using a unique cooking technique in which the scales had been repeatedly lifted and soaked in hot oil to make them crispy and edible. This fish had also been cooked with care and precision, to the point that flaky and juicy flesh contrasted with the crunchy skin. Then, a topping of tapenade had been applied, before being served with bouillabaisse sauce and pieces of sweet grape – which, I confess, I found slightly strange. The second seafood course was hay-smoked langoustine, resting on a bed of shitake and enoki fricassee, and with a bisque sauce drizzled on the side.  I’m always a bit sceptical about smoked langoustine, since the aroma can easily overpower the subtle flavours of the delicate seafood – but I’m pleased to report that this wasn’t the case here.  The quality of the ingredients shone through once again, with juice exploding from every bite of the langoustine. I particularly enjoyed the sauce, which had a hint of onion flavour that carried nicely through the dish. Both seafood courses went down very well with everyone on my table.

Just as I was thinking that what the meal really needed was a classic French dish, one of the service staff suddenly appeared bearing a big tray of Pithiviers – a stuffed puff pastry pie, eponymously named after its town of origin. And wow! It was delicious! Packed with lots of goodies (Chaland chicken, foie gras, black truffle, Colonnata bacon, smoked pork belly, chicken gizzard and liver), it had a dense mouthfeel, but it was the sauce again that brought everything together beautifully. All the wonderful flavours merged sumptuously, making it a truly satisfying dish that made my trip to Paris worthwhile!

After a short break, we were served with a genuinely innovative cheese course – a gorgeously soft emulsion of goat cheese, together with jelly of cider and finished with a drizzle of Sicilian olive oil and a dusting of black pepper. It was a light but tasty bite, so I still had my appetite for dessert!

Before the dessert, came some very interesting-looking pieces of exotic fruit ices, coated with glittering films of sugar. I loved the cool, sparkling visual effect. These were quickly followed by the final course of the evening – a classic Rum Baba. The menu described it as “Kei’s version of Rum Baba”, so it was obvious that it would be a modern take on the traditional dish, and everyone expected great things of it. The first thing we noticed was that it didn’t look like a Rum Baba – it was essentially a small cake, covered with chantilly cream and topped with a quenelle of kokuto (Japanese black sugar from Okinawa) sorbet, and surrounded by kokuto shavings. Still, I was confident that it would taste exactly like a rum baba – let’s face it, they’re not hard to make, all you need is cake, cream and rum! On this occasion, however, I think they missed the rum. Either that, or they used such a miniscule amount that it was undetectable. After the first spoon, everyone exchanged glances of disappointment – this wasn’t rum baba as we knew it! Such a shame that the meal had to end this way!

“this is a place I will definitely keep an eye on”

Apart from this and the amuse bouche, the meal was very good from start to finish. Serving a long tasting menu to 32 diners in one hit is a big ask, and this small kitchen team did an outstanding job. The highly attractive menu used ingredients of the highest quality and freshness – especially in the seafood course. But the stars of the show, for me, were the salad which was very creative, and the classic pithivier that really hit my sweet spot in terms of classic French flavours.  Sure, there’s still room for improvement – that’s true of almost every restaurant – but this is a place I will definitely keep an eye on. Kei could be the first Japanese chef to get a Michelin 3-star in France!