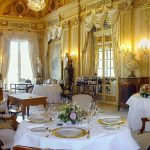 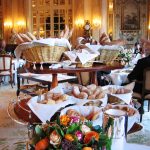 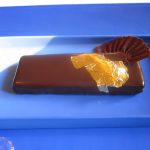 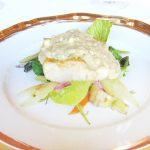 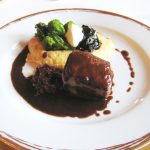 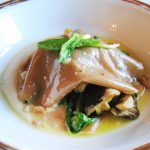 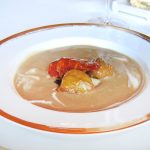 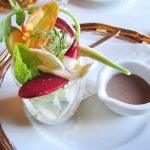 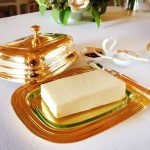 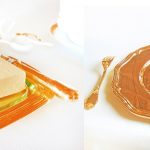 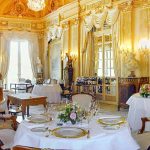 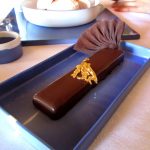 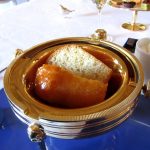 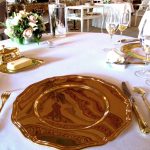 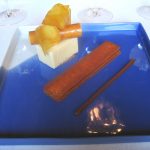 One of the most celebrated chefs in the world, Alain Ducasse embarked on his career at the tender age of sixteen, working in many of France’s prestigious kitchens, including that of the famous Michelin 3-star chef, Michel Guérard. In 1987, he became head chef in the Hotel de Paris in Monte Carlo, the home of the restaurant Le Louis XV. In just three years, this restaurant was awarded Michelin 3-star status. He later opened restaurants in his own name – one in Paris and one in New York City, both soon earning a Michelin 3-star rating. Thus, Ducasse became the first man in history to hold a total of nine Michelin stars. There was a period when, to maintain this incredible standard of quality, he flew between Paris and Monte Carlo on a daily basis.

Alain Ducasse’s empire has now expanded to country inns, cooking schools, cookbooks, consulting projects – and a long list of restaurants from Tokyo to Vegas. He’s earned many awards in his career, including the GQ “Men of the Year” Best Chef Award.

The philosophy of Dominique Lory, the current executive chef at Le Louis XV, is a simple one. He’s interested not in performing culinary gymnastics, but rather to achieve the perfect combination of seasonal ingredients, reinforcing Ducasse’s own mantra of perfection through “60% ingredients, 40% technique”. Thus, his menu evokes the gourmet experience of Alain Ducasse, with his Riviera cuisine.

It’s a luxurious place – situated in the Hôtel de Paris in Monte-Carlo, one of the finest hotels in the world. You almost always see many exclusive cars parked in front. It was the first hotel restaurant ever to earn Michelin 3-star status, and it’s dining room, decorated in 17th century Versailles style, is the most glamorous restaurant setting you can imagine. It’s like nowhere else on earth!

Talk about grand! This golden dining room, with its sparkling chandeliers, beautifully-painted high ceiling, portraits of King Louis’ mistresses, immense floral bouquet, vast mirrors, marble clocks, and terrace overlooking the Mediterranean Sea offer you a journey back to the richness of the past. Every piece of deluxe decoration; of Pieter Stockhmans china; of Murano glassware; of gold-plated Christofle silverware – they all contribute to this completely sumptuous atmosphere. The dishes were specifically designed for the restaurant, and each plate was engraved with the crest of King Louis and the signature of Ducasse. Wow!

We had the 4-course lunch menu. Our server welcomed us with a choice of 18 (yes, eighteen!) mineral waters and 12 varieties of bread – baguette, corn bread, bacon, walnut, and olive, just to name just a few. The menu included a half-bottle of wine per person (chosen from a list specific to this menu). Our sommelier suggested a bottle of Domaine Le Clos des Cazaux 2004, a white wine that turned out to be fresh and crisp, with good acidity.

Our amuse-bouche was a mixed salad. And the presentation was beautiful: nicely coloured, elegantly arranged, precision-sliced…and completely fresh. The combination of simple and natural tastes was a refreshing surprise to the palate.

For our starter, we tried both the lobster in chestnut broth and the wild mushroom in herb butter. The first of these, the lobster, was – quite simply – a culinary delight, with the concentrated flavour of the tender lobster meat combining perfectly with the taste of chestnut.

The other dish, the wild mushroom, was covered with an interesting ‘skin’ made with chestnut and flour. The subtle chestnut flavour and the earthiness of the mushrooms combined excellently with the garlicky herb butter. Magnificent!

And now the main course. We decided to try both the pan fried Mediterranean wolf fish and a young boar neck. Wolf fish is a very light and tender fish with a very clean taste – the kind of flavour it’s easy to ruin. But it was pan-fried to perfection, and the sauce was perfectly judged – just mild enough not to overpower the delicate taste of the fish.

Then the boar. A common criticism of boar is its toughness if not prepared correctly. But it’s a criticism that didn’t apply on this occasion – the meat was surprisingly tender, a testimony to the chef’s skill. This dish came with polenta as the side, a thick mixture made from cornmeal and milk – a common favourite in northern Italy.

The boar was followed by a cheese course – an abundant selection of the highest quality cheese from Bernard Antony, one of the best suppliers in France.

It’s dessert time! And, suddenly, all the golden plates, including the napkin rings, were gone – replaced by Pieter Stockhmans’ blue china, symbolic of the Mediterranean Sea.

As with previous courses, we ordered two different desserts. The classic rum baba served inside a domed golden stand before they rolled over a cart of dark rum. Their signature Le Louis XV was a hazelnut biscuit covered with dark chocolate – its divine chocolate cover had an extremely smooth surface and looked solid, but was actually quite soft with a crunchy hazelnut centre. The mixture of rich chocolate and amazing texture elevated it from a nice dessert to nothing short of gastronomic perfection!

Basically, the service was flawless. Ladies, for example, were provided with a small stool for their handbags, so that they didn’t have to put them on the floor. If you left your seat, three servers would immediately appear – one to help you with your chair, one to show you the way, and another to replace your serviette. Some may say that that’s over-attentive to the point of intrusive; others say that it’s simply top-class service. Also, each customer is provided with a gold-plated Christofle bowl, filled with aromatic water, to freshen their hands before the dessert. It’s the ultimate level of service – and only possible because Alain Ducasse’s restaurants have such a high staff-to-customer ratio.

For me, this royal level of service, combined with the 17th century Versailles-style dining room, was a genuine treat. It proved that you don’t actually need a time machine to experience what Louis XV must have taken for granted on a daily basis – the 18 varieties of mineral waters, 950 choices of wines, 12 varieties of fresh bread, coffee from 8 nations, and fresh teas and infusions from 14 countries. It was like a dream!

But, as with all dreams, it had to end no matter how much we wanted it to continue forever. On our way out, we were presented with an elegant bag of cookies – a sweet (literally!) souvenir of our dining experience at Le Louis XV.

Closed on Tuesday all day and Wednesday lunch during summer.
Closed in December and the first two weeks of March.