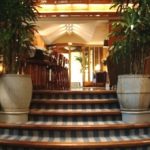 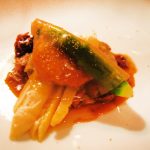 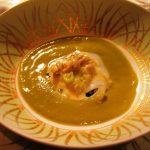 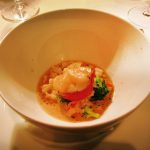 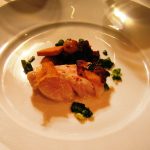 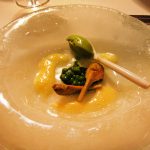 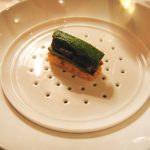 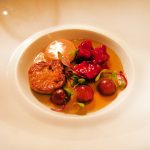 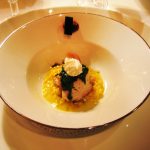 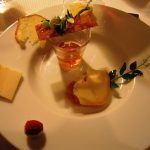 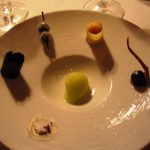 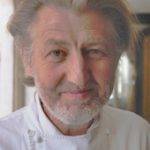 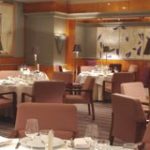 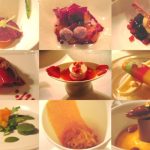 How can you not pay a visit to this “culinary magician” if you are in Paris next time? Using his own words, Pierre Gagnaire has made his restaurant “present now, looks at the future but cares about the past”. He has never stopped exploring and experimenting with new ideas, and always remains passionate and true to his objective of “giving pleasure through the art of cuisine”.

Pierre Gagnaire is already a celebrated chef since the early 80’s. Since 2001, Pierre Gagnaire, classically trained yet extremely talented in discovery of tastes, has been exchanging information and ideas with Hervé This, a molecular gastronomist. He always pursues new ideas and is never afraid of taking risks. With this philosophy in mind, he climbed to the top of the culinary tree, almost as if he is simply ahead of his time.

Pierre Gagnaire now has restaurants around the world from Hong Kong to Vegas. He is also the consulting chef for Sketch in London.

Pierre Gagnaire’s first restaurant, although achieved three Michelin stars, closed down in 1996 due to financial problems. With great determination, the chef opened this new restaurant at the Hotel Balzac. By 1998, he had all three Michelin stars back. That was just the beginning of a new era of success for this incredibly talented master chef. Things get better and better from that point on. In 2006, Pierre Gagnaire restaurant ranked the 3rd best restaurant in the world.

Entering through a relatively narrow and unremarkable door just to the right of the entrance of the Hotel Balzac and passing through the gloomy bar area, we reached the grey coloured wood dining room, which lacks the grandeur expected compare to other world class restaurants.

Our 10-course Spring Tasting Menu at Pierre Gagnaire was a magical experience.

Pierre Gagnaire’s complex and artistic dishes are well known. Our amuse-bouche was a perfect example. It contains various ingredients like olive, goat cheese, walnut, caramel, and a bacon wrapped asparagus. As you can see from the picture, the stimulating colours and the complex combination of textures foreshadowed an imaginative journey! What a total satisfaction of both eyes and palate!

Our first course was spider crab ravioli sat on top of green and white asparagus, smeared by a thin layer of truffle jelly. The asparagus was very fresh, nourishing the palate with gift from the nature. It was a pity to see the meticulous preparation of truffle jelly on top of the green asparagus to lose the natural extraordinary taste and texture of the truffle itself. The sommelier suggested us a bottle of Saint-Péray, Les Figueirs, Domaine Bernard Gripa 2004. This white wine had a strong floral aroma, nice honey across the palate with mild acidity.

Our second course was frog leg in chantilly ink of cuttlefish, with cabbage soup poured on top in front of us. Chantilly ink is an example of the chef’s expertise in the area of molecular gastronomy. It is based on same idea as making Chantilly cream but using cuttlefish ink instead so that the ink is transformed into a foamy texture. I liked each component of this dish, except the rather big pieces of cabbage contained in the soup, whose presence was vulgar and inelegant.

Our third course was the best dish of the night – lobster with fresh coriander sauce laid on top of some small cauliflower and broccoli bites and finished with a white wine broth. This dish was a testimony of how Pierre Gagnaire rigorously mastered cooking times, texture, flavours, and colour. It was stunning to taste the lobster meat cooked to this degree of perfection, as if one second less or one second more of cooking time would not give the same result; it was a magnificent contrast between the gentle texture of the lobster meat and the crunchy texture of the cauliflower and broccoli bites; it was a harmonious blend of lobster sauce and broth. We also admire the glorious colour of this spectacular dish.

Our fourth course was hake poached in butter fondue with cod tripe, garnished with ginger and onion gratin. Hake is a white fish belonging to cod family. Its taste is similar to cod with a softer flesh. Once again, the fish was poached at the perfect temperature with the perfect cooking time.

Our fifth course was fried artichoke in Bombay curry along with green pea ice with fresh mint served on a spoon. The yellowish semi-transparent foam was very interesting. It had a strong tomato taste, but without the usual tomato red colour. This was actually another innovation by the chef. Lycopene, which is the substance that gives tomato the red colour, is not water soluble, so a filtration process can actually eliminate it. This can give a liquid no colour, yet its natural taste remains. This invention is named Tomato Water.

The sixth and seventh courses came together, stacked one on top of the other separated by a plate. After finishing the sixth course, a thinly sliced eel with diced chorizo and mussels sandwiched in between two slices of grilled zucchini set on top of a crunchy toast, the server took away the top plate. Hidden underneath is the next course, a rabbit medallion accompanied by a round patty of pepper pâté and few tuna cubes, decorated by a triplet of moscatel and finished off with a beef broth in jelly form.

It was my first time having chorizo with zucchini, eel and mussel. For the blue-fin tuna, chef Gagnaire applied beet juice to provide an extreme reddish colour, and hence he calls it “red” blue-fin tuna. The three muscatels, grapes that produce Muscat wine, added an extra fruity touch to this complicated dish.

What an interesting and complex blend of so many unexpected tastes and textures in a single dish! The two-layer presentation was intriguing, but to be honest, we don’t think it serves any purpose.

Our eighth course was Veal with mace / Risotto with saffron and sorrel / Ricotta with green mango / Tamarind. Mace is a spice obtained from nutmeg flower. The dish was inventive and the veal was obviously of top quality. Nevertheless, I found that putting tamarind at the side of the dish was a bit over the top. The chef’s purpose of the using this particular ingredient was difficult to identify.

Our ninth course was a beautifully decorated cheese course or a sorbet course. One of the interesting items was a goat cheese ball dusted with paprika. For the sorbet dish, there was a thin and transparent layer of jelly with some salt and various spices on top. It melted on the tongue and surprised our palate.

Finally, it was the Gagnaire’s Grand Dessert, a nine-course dessert marathon, which made us breathless. Taste, texture and colour were carefully considered in every single dish; the ingredients ranged from typical chocolate to strange noodles; the end result of these desserts ranged from ecstatic to unbearable. Do you also find it absurd to serve a big piece of red pepper as dessert, or is it just us? Well, Pierre Gagnaire himself admits that his cuisine “occasionally goes overboard”. This is an inevitable by-product of his most admirable quality – always experimenting with no fear of taking on risks.

I was very surprised to see that this Michelin 3-star restaurant was short staffed. The dessert for the table next to us was brought out but left on another table as no staff was available to clear out plates from the previous course. After 5 minutes, one server finally came did the job but the ice cream was mostly melted!

Though it was short, but Pierre Gagnaire did make a 5-second visit to each table multiple times during the meal.

Closed on Saturday all day and Sunday lunch.
Holidays two weeks in July.