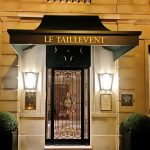 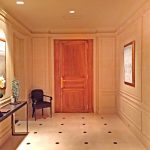 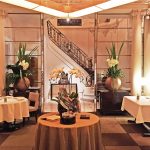 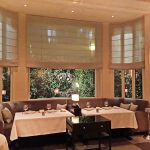 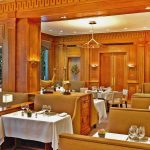 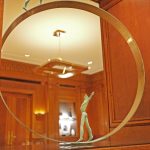 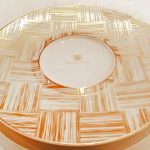 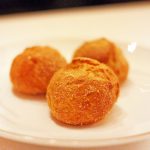 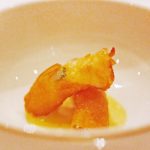 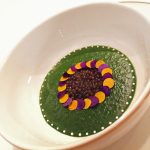 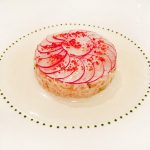 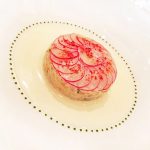 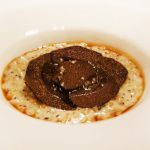 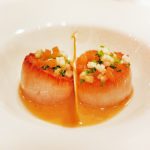 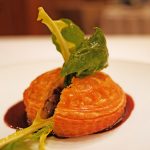 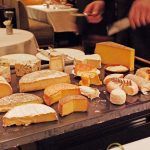 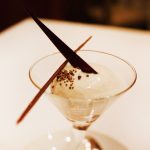 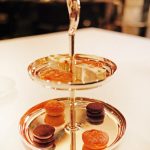 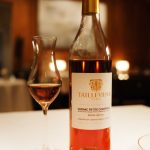 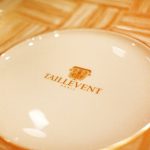 Image 1: You’ll find this smart and classy entrance just a short walk from Arc de Triomphe - it belongs to a restaurant that’s become a legend in its own right, and is one of the most important landmarks in the history of haute cuisine. Named after a 14th century cook, famous for having written the first French cookbook, this restaurant opened its door in 1946, and was awarded it's first Michelin star in 1948. A second star arrived in 1954, and a third in 1973, though this was removed in 2007. Still, there’s no doubting the pedigree of the place. If you’re in the mood for classic French food at its best, you won't be disappointed.

Image 2: The restaurant itself is a small mansion, partitioned into several rooms. Behind this door is…

Image 3: … this elegant dining room, The Trianon (yep, they even name each room). The marbled spiral staircase leads upstairs to the private dining area.

Image 4: The Trianon room also has a few dining tables looking out on the courtyard.

Image 5: On the ground floor, we found this other rather beautiful dining room, The Lamennais. It was a complete contrast to the room we’d just seen – rich wooden panels, lush carpets, and…

Image 6: … various pieces of art, decorating the room. It was here that we spent the next few hours, indulging ourselves with champagne, amuse bouches, the tasting menu, wine pairing… well, you know the routine!

Image 7: Attractive silverware and serveware, all set and ready to go. In terms of menu choice, it turned out to be a tough decision as there were several choices, all very attractive. In addition to the a la carte, for example, they had a reasonably-priced 4-course menu which featured caviar, lobster, and lamb - or you could opt for a 6 or 8-course tasting menu. And their wine list was incredible – absolutely massive. Needless to say, they had bottles in the 4 (and even 5!) digit range (Euros), but – amazingly – they also had bottles under €30! And yes, we’re talking price per bottle, not per glass! And this is in a Michelin 2-star place!

Image 8: While still debating the menu options with my dining companion (the Cumbria Foodie once again), warm gougères appeared. In anticipation of tasting it, we took a sip of our champagne and continued our study of the menu. I noticed that, for lunch, they have a 3-course menu for €88, or €104 if you want to include two glasses of wine. That’s a fantastic bargain for fine food at such a historical place in such a great location! We’d have booked a table for tomorrow lunchtime there and then, had we not already committed to another 3-star booking.

Image 9: Another amuse bouche, deep fried langoustine with a sweet and fruity sauce, arrived while we continued to debate our options for the main menu. Finally, we decided that, though there were some great-value choices on offer, we would go for the long tasting menu. After all, it was our first time here, and we wanted to experience the Full Monty. No sooner had we finished our glass of champagne, than the first course arrived.

Image 10: Look at this! Can food be more beautiful? Stunning! It’s watercress purée, with the generous portion of caviar in the centre surrounded by a perfect circle of flower petals. I really admired the superb craftsmanship and I really hated to destroy such a creation! The watercress was subtle since the focus was to enjoy the pure savouriness of caviar. Incredible! Presentation aside, the luxurious mouthfeel with the elegant flavours of the sea burst from each tiny ball of caviar was exceptional.

Image 11: OMG, another work of art! Look at its sheer precision. Each drop of dill sauce and each slice of radish is perfectly placed, and underneath is a layer of crab meat with lemon emulsion. Destroying such perfection was another heart-breaking moment. My regret passed the instant I tasted the wonderfully fresh flavour of crab meat, highlighted by the light lemony sauce. The crunchy texture of the radish was a bonus! Marvellous!

Image 12: Such a skilful arrangement deserved another photo! I could look at it for hours and wouldn't get bored – it’s simply beautiful. I guess real haute cuisine is as much a treat for the eye as for the palate.

Image 13: Next was a black truffle risotto made with spelt instead of rice giving each grain a slightly rough texture. It was one of those comforting courses you can have at any time of the day and it feels right. A drizzle of morel jus gave this creamy dish an even greater depth of taste – I could eat spoonful after spoonful and never get tired of it. And look at the black truffle on top – they must have sourced jumbo truffles to get such big slices! Traditional flavours with fine ingredients... always a winning formula for me. Simply divine!

Image 14: A pair of seared scallop each topped with diced apple and split by a thin crisp of apple, sitting on apple cider sauce. Just as I would expect for scallops at this level of cooking, the surface was slightly crispy while the centre had a touch of rawness which retained the soft and moist texture. The cider sauce was nicely apple-sweet, without overpowering the essential flavours of this delicate seafood. A simply fabulous meal so far. Would it continue? Well…

Image 15: …Yes. It would. A very traditional duck pie arrived as the main course. It was served with Rouennaise sauce, consisting of red wine, duck jus, bone marrow - and even duck liver. Sauce is one the fundamental elements of classic French cuisine, and this one lived up to expectations - each drop was packed with rich and well-balanced flavours. The meat inside had been fully minced before being wrapped in pastry. The result? Well, suffice it to say that I had to ask for another round of bread and extra sauce. Seductive!

Image 16: Time for cheese. They had a large cheese board… cow, goat, sheep… soft, hard, blue… enough to satisfy even the most demanding cheese lover.

Image 17: Now onto the final section of the menu. The first dessert was a disk of very airy cheese cake topped with milk sorbet. As I was getting full, I was glad it wasn't a heavy dessert, but I did expect a bit more than just cheesecake and sorbet. For the first time in the meal, I wasn't impressed.

Image 18: The final dessert was served in a martini glass. Essentially, it was just cream on a layer of chocolate mousse with a crunchy caramel bottom, garnished with a thin wedge of chocolate. A slight disappointment, to be honest – let’s face it, you can find this kind of dessert in a pub. I expected much more effort from their pastry chef!

Image 20: But instead of tea, a nice surprise – the manager offered us the house cognac to go with our petits fours. What a pleasant and thoughtful final touch!

Image 21: If you need proof that delicious food doesn't need to be over-complex, this is it. Every course was a balance of just two main flavours - watercress and caviar, lemon and crab, truffle and risotto, apple and scallop. It’s true that I expected more from the desserts, but despite that, I enjoyed every course of the meal. The service was very smooth throughout, and, as a bonus, I liked the fact that there were very affordable options for both the food and the wine. You don’t need to break the bank to come here. So, even though the meal was over, I wasn't the least bit sad ... because I knew I’ll be back here very soon!