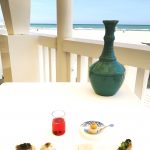 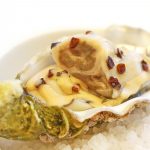 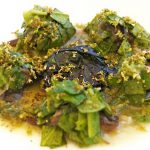 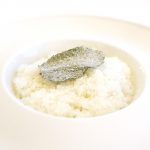 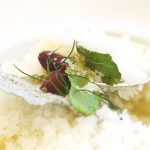 I loved the location of this restaurant. As it was right next to the seafront, you could literally walk out from my table onto the beach- it really made me feel like I was on holiday. Senigallia is not a place that’s necessarily easy access for an international traveller. The closest airport is Ancona (in the middle of Italy’s East coast), and the flight is followed by a short drive North to reach this destination.

Chef Mauro Uliassi started this restaurant 30+ years ago as a beach hut bar with his sister, serving simple seafood dishes for tourists. Due to his passion with food and continued training from various fine dining restaurants in Italy, his cuisine was able to slowly evolve, earning him the first Michelin star in 2000 and second star in 2009. However, he didn’t stop there and continued his pushing of the boundaries and application of creativity to his dishes, which earned him the ultimate 3rd star in 2018.

My first impression of the menu was that it was a very original cuisine where the chef is not afraid of unconventional combinations. Though rooted in traditional Adriatic Coast foods, Uliassi has curated unique dishes among more commonplace ones. Even as I was going through the menu, they had already presented me with an elaborate set of 6 amuse bouche.  Tiny éclairs of chard mousse, a delicate wafer with layers of foie and hazelnut cream, small disks of focaccia topped with octopus and lard, crouton of anchovies and black truffles, a sphere encased liquor of pine nut and tamarind, and a shot glass of Kir Royale to finish. There was more to come.   Five breads were placed onto the table: white, sour dough, seaweed, pecorino, and multigrain. With the long stretches of golden sand as the backdrop, It’s hard to imagine a better opening scene to this amazing lunch.

The unique combinations continued to be a recurring theme throughout the long menu, each arranged carefully on simple white plates.  Some were rather fun:

However, some I didn’t understand at all:

The best dish of the meal had to be the bone marrow.  It was a small cross-section of the bone with marrow inside topped with cod tripe. The nice bouncy texture of the tripe combined with the richness of the marrow was very satisfying – so much so that I used my last piece of the bread to soak up every drop of sauce.

The meal was sophisticated to say the least, beginning with 6 amuse bouche followed by 14 courses and finishing with 6 different petits-fours.  You certainly need to be open minded to enjoy this meal since some courses are a bit on the experimental side. Just be prepared for some imaginative and original dishes!