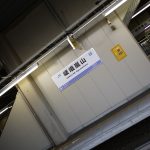 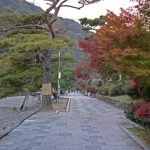 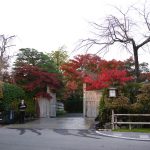 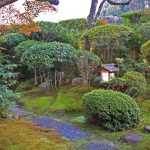 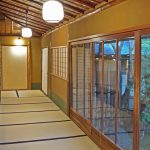 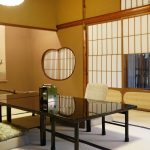 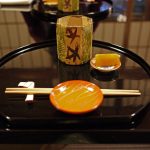 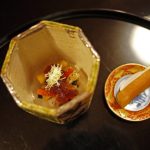 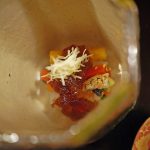 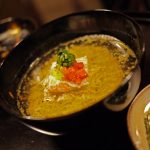 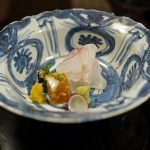 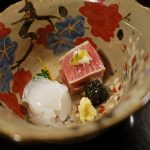 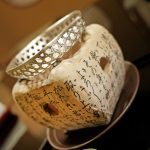 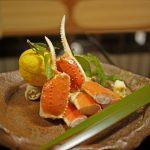 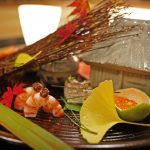 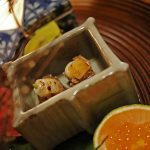 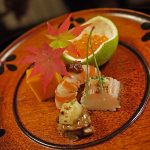 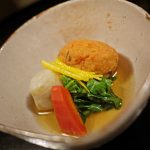 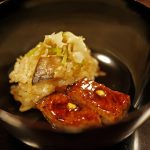 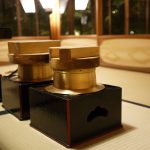 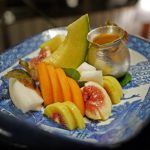 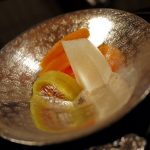 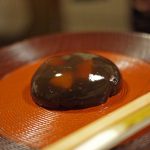 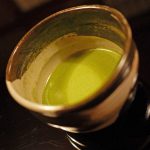 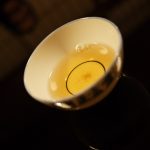 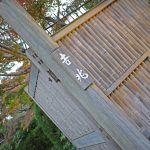 Image 1: Kyoto - A place full of traditions and rich in culture. This was my third visit and I decided to venture, by train, out to Arashiyama, a nationally designated Place of Scenic Beauty in the Western outskirts of the city. Although the famous temples and bamboo groves of Arashiyama were an attraction in themselves, my main objective was to visit the Mecca of kaiseki.

Image 2: The leaves had already started to turn a glorious red - in few weeks, the place will be thronging with tourists eager to enjoy the beautiful autumnal scenery.

Image 3: If there’s one place that’s known for its traditional cuisine, it must be Kyoto; and if there’s one restaurant that's known for kaiseki, it must be Kitcho - this original venue. Located immediately next to the river, this entrance is a favourite photo opportunity for many tourists, as the house has historical significance in the context of kaiseki cuisine. The current chef represents the 3rd generation of this famous restaurant.

Image 4: At Kitcho, you can’t just walk in and eat – the fame of the place ensures that it’s fully booked for 3 months ahead. The garden alone makes a visit worthwhile. Beautiful!

Image 5: A kimono-clad waitress led us through a very traditional setting to our table.

Image 6: Simplicity is the key to the elegance behind traditional Japanese culture. A simple garden, simple rooms, simple decor – together they demonstrate how true class is about understatement rather than overstatement. I loved the formal, yet somehow relaxed, atmosphere created by the space in this private-room-only restaurant. Our room could easily fit eight, though the restaurant used it as a room for four, and there were only two of us! There are only 6 rooms in this house, serving about 25 guests with each service.

Image 7: To begin the menu, a nice cup of warm hojicha, roasted green tea and a sip of ice chilled shokuzenshu (apperitif) of sake served in shallow cup. Menu were pre-order when we booked by phone. There were only three prices to choose and the menu will be decided by the chef on the day based on your budget.

Image 8: Although we had a menu to help us follow the courses as they were served, it was all written in Japanese - and our waitress spoke only enough English to communicate the essentials. Never mind - after a short wait, our Zensai (前菜) (otherwise known as the amuse bouche) arrived – a small plate of marinated mullet roe with radish on the side. If you’re wondering what was in the tall cup, it was…

Image 9: …matchsticks of vegetable - carrot, radish, persimmon and cucumber, plus some baby shrimps as well. It was like a Japanese version of salad, with a very appetising ponzu (citrus-soy sauce) jelly on top.

Image 10: Next up was the soup course or Osuimono (御吸物). The clear soup came with small sheets of dried seaweed on the side. Our server advised us to try the soup first and add the seaweed as we like, which we did. At the bottom of the soup was some snow crab (which was in season) and some silky-textured tofu. All-in-all, a very aromatic soup, rich with umami.

Image 11: And now the sashimi course, Mukōzuke (向付) - consisting of anglerfish, the fish of the season, served with two different sauces (fish liver sauce and ponzu). Actually, these sauces were critical, as – by itself – the fish didn't taste of very much. Even with the sauces, the course was too bland for me, really – I prefer more assertive tastes.

Image 12: Another sashimi plate otoro. Part of this was tuna belly, often said to be the king of sushi ingredients, as it’s the fattiest part of the fish. This moist, slightly seared morsel was to be dipped in lemon soy sauce and eaten with a tad of fried garlic. And wow! It melted in mouth! Then onto the thin strips of squid, which we dipped in ginger soy and sesame. That was good, too. I particularly admired the unique knife technique that had been applied to the surface of each slice of squid, giving each one a very different mouthfeel.

Image 13: Yakimono (焼物) is a flame-grilled course. Actually, on this occasion, it was cooked crab, served cold - but we had the option of warming it up over hot charcoal.

Image 14: Our waitress was extremely attentive, pouring every drop of sake for us with care. She even asked if we would like her to remove the meat from the shell for us – but we politely declined her offer, as we’re both pretty experienced at eating crab. As it turned out, there was no need for anyone to take on this task, as the chef had cracked the shell so skilfully that the meat fell from the shell all by itself. All it needed was a gentle push.

Image 15: A kaiseki meal is as much for the eye as for the palate. And Hassun (八寸) is perhaps the most poetic and symbolic course in the meal. Typically, it will include one seasonal food to represent mountain, and another to represent sea. We were brought a superbly decorative plate – with food hidden all over the place! Inside the house miniature was…

Image 17: Our waitress then carefully laid out on our plates, piece by piece… Salmon roe, prawn, monkfish liver, and clam. Excellent!

Image 18: And now we’re getting close to the core of the menu. It was the Agemono (揚物), a grilled and deep fried course. In this case it was grilled butterfish in soy sauce, chestnut, and mushroom tempura. Even though the fish was very meaty, I still enjoyed the flavour of sweet soy sauce glazed on top – and it had a clear but gentle charcoal aroma from the grill. Not bad - not bad at all.

Image 19: Nimono (煮物) is a simmered dish course. Ours was steamed vegetables with a nice fragrance of lemon zest. There was also a tofu ball with yam and red carrot.

Image 20: The main course, Gohan (御飯), is often a rice dish made with seasonal ingredients. In our case it was Kyoto beef with mushroom rice. Although the beef was tender, it was a long way from the premium Japanese cuts that that I’ve had before. It was also a very small portion. Disappointing!

Image 21: The waitress then served two huge pots of rice, one plain and one mushroom, accompanied by an invitation to have as much as we wanted. Just for a second, I thought she was going to say we could have as much beef as we liked. But no. In my dreams!

Image 22: I was only half full when Mizunomono (水の物) was served – a concluding series of courses consisting of fruit and sweets. This beautifully arranged plate has fig, pear, kiwi, melon, and persimmon.

Image 23: It looked just as good on our plates – and tasted great, too. Superbly juicy and sweet.

Image 24: This last dessert consisted of brown sugar with lotus seed inside. It resembled the Chinese traditional dessert "Three Non-stick" in the Forbidden City.

Image 25: There are many styles of matcha, but our Kitcho chef recommended this foamy version - unique in that there was more foam than tea. The thick layer of foam hid a small, but intense-tasting, sip of tea at the bottom. Cool! Like a tea version of espresso.

Image 27: Well, it was pretty similar to other Michelin 3-star kaiseki that I’ve experienced – a beautifully presented and perfectly executed meal, using seasonal ingredients in a traditional setting. The service was flawless, treating every guest as a VIP – and the proprietess of the restaurant visited us three times during the meal. On the downside, the price of the meal was about twice of other similar 3-star kaiseki, and as I left with a half-full stomach, I ended up going for a second dinner that evening!