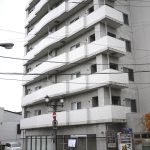 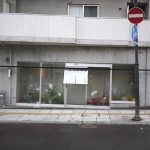 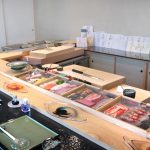 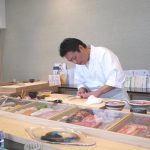 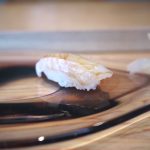 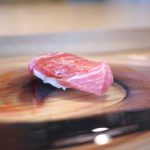 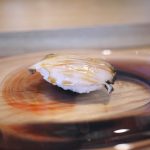 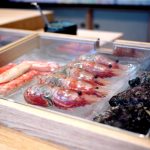 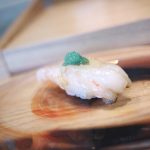 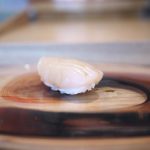 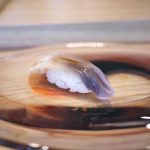 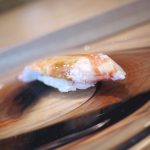 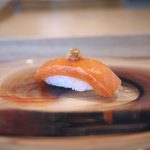 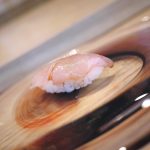 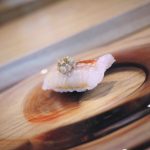 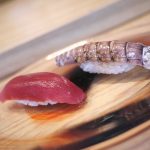 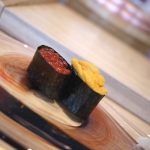 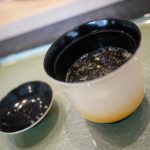 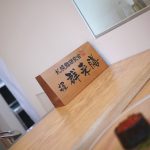 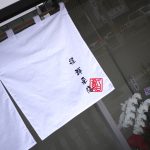 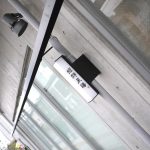 Image 1: It was a serious joint effort over the phone between our hotel concierge and a local guy who we grabbed off the street to locate this restaurant. The difficulty arose due to the fact that the restaurant had just moved to a new site 3 days ago without informing our concierge despite having made the booking just the week before!

Image 2: The rain didn't help either. After knocking the door of nearby neighbours, the new location turned out to be only 50 meters down the road on the opposite side of the street! What an unlucky start losing more than 30min from our tight 1.5-hour lunch slot as we had a train to catch back to Sapporo.

Image 3: Although I was wet and very annoyed, once I entered this sushi-ya, I said to myself, "good that I didn't give up in the end". I immediately fell in love with this brand new modern sushi counter and the impressive "jewellery box" showcasing the array of fresh seafood available on the day, along with the renown Otaru glass serviceware which was made locally.

Image 4: Knowing our time contraint the Chef began working on our meal immediately. Though I was very concerned about the time, he was very relaxed. As I gazed on to the repetition of the masterful skill that went into the preparation of each sushi, strating with the knife skills on the fish and the handling of the rice, I soon began to wind down to relax as well.

Image 5: My first sushi was ready with hardly any waiting time. The meal began with seabream. They had a tiny soy sauce dish for each diner but it wasn't needed at all since the homemade sauce glazed on top was perfect for me. All I had to do was to pick it up with my fingers and pop it into my mouth. A high quality start but I wanted to try a few more to judge.

Image 6: Chef Katsutoshi jumped right into the fatty cut and I couldn't complain - o-toro, fattiest part of the tuna belly. This was divine! A perfect piece of o-toro giving a truly melt-in-mouth sensation with uniform marbling throughout without any chewiness. . None of the o-toro we had in this trip, including a 3-star restaurant, came anywhere close to this!

Image 7: I got really excited when he took out a huge abalone which he sliced off a couple of pieces for us. I admired the texture in particular, with its firmness yet retaining a bit of the crunchiness along with the sweetness from the sauce followed by a very intense abalone flavour. Incredible!

Image 8: When I entered the restaurant I already had my eyes on these jumbo local shrimps and yes, I was getting a piece of it!

Image 9: The shell was removed and its distinct green roe was used as garnish. Wow, this was exceptional! The creamy and moist texture, the heavenly pure flavour of the shrimp, together with the warm sushi rice that I could feel each grain of rice with a nice touch of vinegar, I couldn't ask for more!

Image 10: Scallop, my favourite shellfish and Chef Katsutoshi didn't disappoint me. Moist, velvet, with the right amount of sauce coated on top and the temperature contrast of the rice underneath, it was a beauty!

Image 11: This must be my first time having this specie of surf clam as I didn't recall seeing this unusual pale purple colour before. Very thin as it was butterflied and similar to the abalone, I really appreciated the extra crunchiness in the middle.

Image 12: We had a lot of snow crab over the last few days in Hokkaido and this one was similarly of high quality. Very juicy and poached to perfection.

Image 13: Hard to believe but what appeared to be a simple looking salmon sushi with ginger garnish turned out to be the most memorable item of this meal! How could such a lean cut be so creamy and simply dissolve inside my mouth? The hint of ginger at the end was the icing on the cake. This was not an ordinary salmon sushi, but Chef Katsutoshi's salmon sushi. Astonishing!

Image 14: We had kinki (thornyhead) a few times already during the trip but this one clearly stood out from the rest due to the amount of moisture retained in the flesh. And his homemade light soy concortion was seductive.

Image 15: Red snapper, a very firm fish and versatile when pairing with spice. It was topped with a mix of ginger and horseradish.

Image 16: Akami, a lean cut from the back of the tuna, and mantis shrimp. At this point, it became obvious that he sourced or treated his fish differently. We had the same types of sushi at other reasonably top sushi-ya's but both of these had much more moisture in the centre and far more enjoyable.

Image 17: Well, we knew he would save the most powerful sushi at the end, salmon roe and sea urchin. Like the snow crab, Hokkaido is renown for the superior quality of the salmon roe and sea urchin and both of these were on par with the ones we had on the trip. Needless to say, the uni was fresh without any trace of myoban bitterness and I particular liked the roe not being overly salty.

Image 18: A miso soup to finish off one of the best sushi meal I've ever had. Looking at the time, we still had 45min left! Yes, it took him 15min to make two sets of 15piece without sacrificing his quality of work at all. I had to double check the clock just to convince myself! And I realized both my soy sauce plate and my chopsticks were untouched.

Image 19: Chef Katsutoshi truly demonstrated the art of sushi making. He was calm and efficient as if every motion was optimized using the least energy and time, all whilst delivering consistently fautless sushi. A pleasure to watch!

Image 20: What seemed to be subtle aspects are actually what distinguish top sushi chefs - the precision of each drop of sauce, the tiny touch of garnish, the thickness of the fish, the amount of rice, the temperature contrast of the fish and the rice, and most importantly the way that he kept the freshness of the fish so that the abalone was more crunchy or the salmon was more creamy.

Image 21: Just as we were about to complain how unsatisfied we were with many Michelin sushi-ya's we had so far in this Hokkaido trip, this 2-star sushi-ya surprised us with the highest quality nigiri we had since our Sushi Saito experience in Tokyo three years ago! And all that for half the price of the 3-star Tanabe in Sapporo!