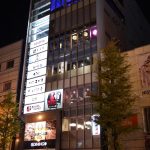 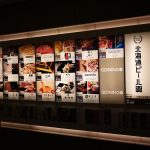 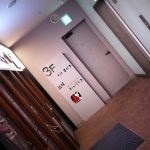 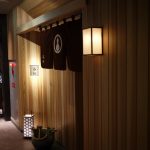 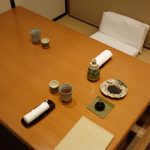 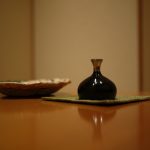 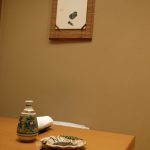 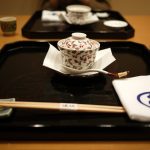 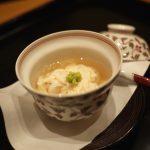 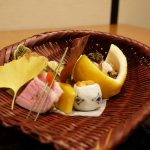 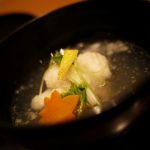 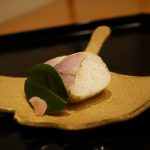 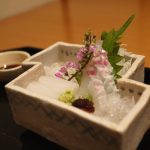 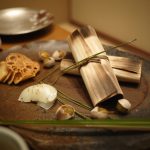 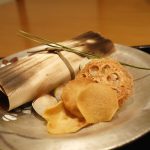 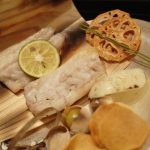 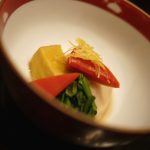 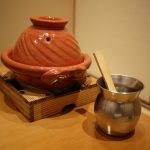 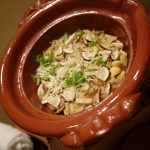 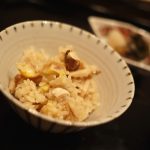 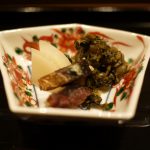 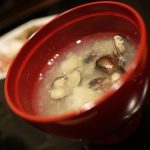 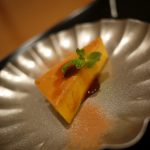 Image 1: I've been to Japan quite a few times now but I continue to be fascinated by the fact that there are a vast number of buildings that only contain restaurants and eateries inside them!

Image 3: Sharing the third floor with three other restaurants was the best kaiseki restaurant in Hokkaido according to the Michelin guide.

Image 5: The restaurant is tiny. A small counter area for six, a kitchen area at the entrance and two small rooms. We requested on this occasion a room when we made the reservation in advance.

Image 6: A bell for us to get service when required. The waitress always knelt down before opening and closing our door.

Image 7: She recommended a bottle of Kunimare sake from Hokkaido which was smooth and had an elegant aroma. Very enjoyable.

Image 8: It was the chef's wife who served us throughout the meal as she was able to speak some English.

Image 9: First up, a small cup of thick soup with yuba skin and fish roe. A warm start but I found it bland.

Image 10: Once a plate was removed from our table, another plate was served. A colourful dish with a bit of everything - crab, mushroom, sea urchin, sweet egg custard cake, a tiny fish with roe, duck and pickled radish. Both the crab and egg custard were nice, but the sea urchin was very salty, the duck was dried and the tiny fish reminded me of canned sardine.

Image 11: The meal so far was very light in flavour, including this soup course of red snapper covered in grated radish. At the bottom was a plain chewy rice ball.

Image 12: My first impression of this mackerel sushi was too much rice and wondered why no soy sauce was provided. I immediately understood after popping it into my mouth. The mackerel was very strong but the amount of rice nicely balanced it out. It was rolled on thinly peeled radish offering a crunchy texture. Simple, but the best item of the meal!

Image 13: A sashimi plate of snapper and squid whic came with soy sauce. The fish was tasteless on its own, making the soy sauce essential. The squid was nice and creamy, much better than the one I had at Tanabe the night before.

Image 14: Next was a grilled course.

Image 15: Wrapped in paper-thin wood was…

Image 16: ... Barracuda served with lotus root chips and lotus. Some skills here as it wasn't dried out, but unfortunately it was again rather bland.

Image 17: A bowl of steamed vegetables. Very subtle flavour - a course that was all about the ingredients. I enjoyed the spongy-sticky texture of the yellow gluten cake called "Fu".

Image 19: A huge pot of rice cooked with mushroom and chestnut.

Image 20: Nice fragrance from the mushroom. Although they offered us to refill our bowl and we were both a bit hungry at that point, we didn't want to stuff ourselves with rice.

Image 21: The rice course was accompanied by salted fish and pickles.

Image 23: Our last course, pumpkin pudding came with a hot tea. As expected, not a heavy dessert at all. I was disappointed that no meat course was served and just one dessert even though we already selected the most expensive menu!

Image 24: The service was impeccable throughout. The chef and the team even accompanied us to the lift. It was a light meal with subtle flavours. I really wished that I could have left the restaurant with more tastes in my mouth. We went for a Japanese steakhouse afterward to compensate!