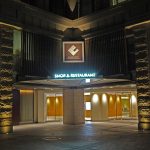 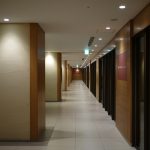 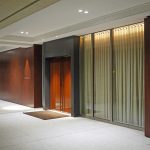 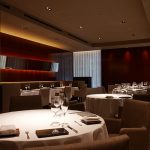 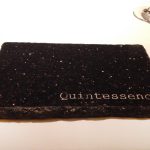 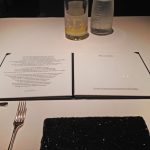 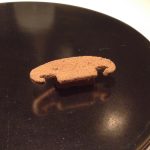 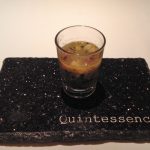 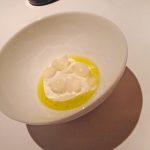 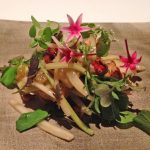 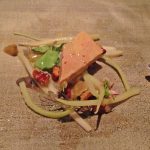 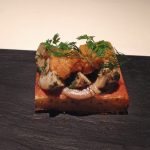 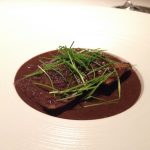 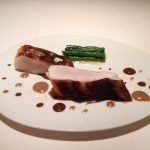 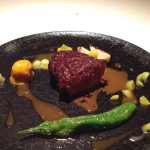 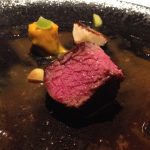 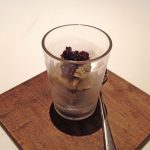 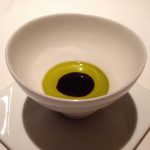 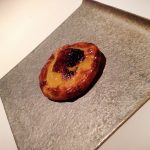 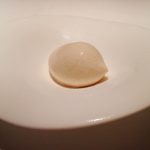 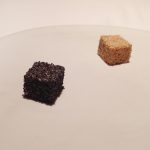 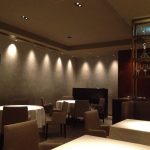 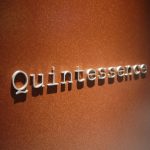 Image 1: As you probably have known by now that it’s Tokyo that has the most Michelin 3-star restaurants in the world, but interestingly, not all of these twelve feature Japanese cuisine. Quintessence was a nice break for me from days of eating Japanese food. This restaurant is situated on the ground floor of an office building that’s at least 15 minutes’ brisk walking from any train station.

Image 2: To get to the actual restaurant entrance, I had to walk through corridor after corridor, as it’s on the far side of the building.

Image 3: Chef Shuzo Kishida started his career in French cooking in Tokyo - seven years before moving to France, where he worked for five years in several Michelin-starred establishments. It was during this period that he held the role of sous-chef at the 3-star L’Astrance in Paris, under Pascal Barbot. Which is why, I guess, the cuisine here has a close resemblance to my experience at L’Astrance.

Image 4: When you know that the dining room here seats a maximum of 20 diners, it comes as no surprise that the place is fully booked two months ahead, both for lunch and dinner. And you can’t fault the staffing levels – there were six customer-facing staff and nine in the kitchen, to ensure excellent service. Two members of staff stood constantly at opposite corners of the room, monitoring the whole area.

Image 6: The menu has to be unique, surely? It’s certainly different. On the left are a few paragraphs about the chef’s cooking philosophy – the importance of respecting the food, understanding the cooking process and attention to detail in seasoning. On the right is the menu of the day – which is a blank page, entitled “Menu carte blanche”. As you know, to have ‘carte blanche’ means to have complete freedom over action, so this part of the menu means that the chef is taking control, i.e. no choice!

Image 7: The no-choice concept also applied to the bread - there was just one type. And the wine list consisted of only French wine! The amuse bouche emphasised the minimalistic style of cuisine here – Shitake mushroom, dusted with porcini powder, on shallot cream. A light earthy start.

Image 8: A shot glass of boiling corn soup, with tomato and cubes of beef tongue. A fun mix of textures – not bad at all.

Image 9: This simple looking dish is actually one of Chef Shuzo’s signatures - made with Kyoto milk curd, freshly arrived that morning, finished with shaved macadamia nuts, lily bulb, and olive oil from Southern France. The challenge for the chef is that the concentration of the curd varies from day to day, so there’s no fixed recipe – he has to rely on his skill and experience to decide the proportions of other ingredients. It’s certainly a very unusual dish – rather like a silky tofu, except with a more milky flavour. Refreshing though!

Image 11: Inside the salad, not obvious at first, were pieces of French foie gras terrine. I was pleasantly surprised at the mildness of the blue cheese, which meant that I could taste each component of this simple, but effective, dish.

Image 12: Another unique dish - mushroom and sea urchin on a base of savoury cake. The balance between the rich, creamy sea urchin, the soft-but-crunchy earthiness of the mushroom and the lemony undertones from a liberal sprinkling of chopped dill was interesting. I won’t describe it as delicious course, but it was special in the sense of being unusual and expertly created.

Image 13: Ravioli of mushroom, with pigeon liver sauce. Not, perhaps, the nicest-looking dish, but one of the highlights of the meal nonetheless. Tiny crumbs of liver in the sauce brilliantly added richness, but without a trace of that unpleasant offal smell that so often accompanies liver. Actually, the sauce was quite addictive - so much so, in fact, that I wouldn’t have minded more!

Image 14: Now, a local Japanese white fish called isaki. It’s a thick cut, so although it had been toasted at 310°C to create a thin outer crispiness, it was a bit bland in the middle. It came with three sauces: pistachio, garlic and chive. The fish was delicately textured, but the whole course was so dominated by the garlic element that it wasn’t a course for me.

Image 15: Our main course arrived: a generous portion of beef from the Nara area in Japan, accompanied by chestnut pumpkin, bamboo shoot and a long green pepper. According to the waiter, cooking the meat evenly throughout was a bit of an epic exercise. Apparently, the chef had to set the oven (as with the fish) to 310°C, then put the meat in for 1 min. It’s then taken out to cool for 5 mins, and put in again for another minute. This cycle is repeated for 3 hours. To save you doing the math, that’s 30 times in and out! And yet, it was…

Image 16: …A waste of time, in my view. Despite having a lovely even colour, the beef itself was thick and slightly tough, with a completely unremarkable texture, not at all what I would expect from Japanese premium beef.

Image 17: The dessert had four parts. First up was a shot glass of Chinese Fujian black tea sorbet with raisin. The lovely, delicate bitterness of the tea came through beautifully.

Image 18: Then another unusual – ‘crazy’ is probably a better word – mixture: coconut cream custard had been drizzled with pistachio oil, and a large drop of extremely intense expresso placed in the middle. Strange, for sure - but fun. Each bite was a journey – the initial bitterness at the back of the tongue giving way to coconut sweetness with a hint of nutty aroma underneath. Very creative - and a pleasant surprise!

Image 20: And another signature - brown ice cream! Meringue is first toasted until brown, then powdered, mixed with egg-yolk and made into ice cream. Finally, sea water is sprayed on top. There are hardly any ingredients – just egg, cream, sugar and sea water. The result is a light saltiness with excellent balance. Elegant!

Image 21: Is this the most minimalistic petits fours to be found at any 3-star French restaurant? Probably. It’s chocolate ganache coated with black/white poppy seed. Warning – it’s not a great idea to finish your meal with these, as the fine seeds stick to the teeth!

Image 23: Conclusion? Well, the service was as good as it gets. Absolutely first-rate. Food-wise, it was a very light meal, highly ingredient-focused, and lots of careful thought had clearly gone into every dish. However, although there were some unique surprises and successful combinations, both mains (fish and beef) were rather a let down. Overall, I thought it was disappointing performance for a Michelin 3-star! I’m in no particular hurry to come back.