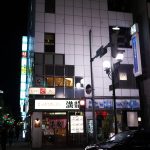 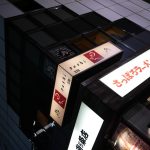 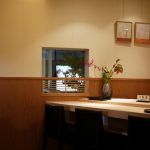 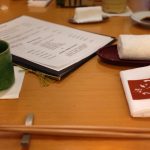 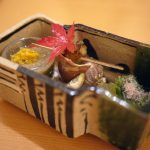 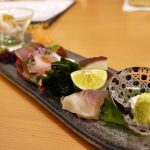 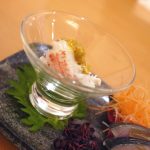 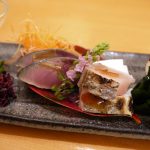 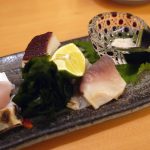 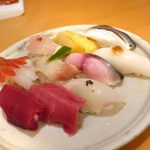 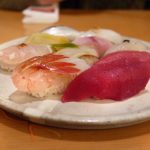 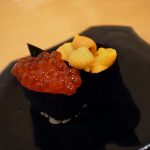 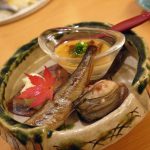 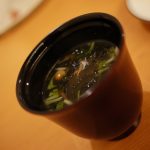 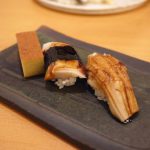 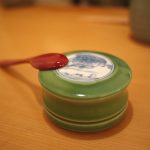 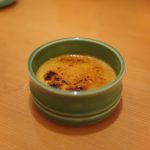 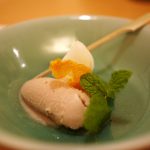 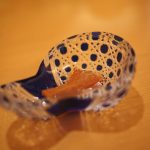 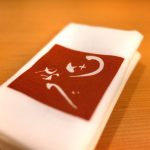 Image 1: Located in the heart of Sapporo, this tiny sushi place found on the 2nd floor above a noodle shop at a major intersection is what Michelin considers the best sushi restaurant in Hokkaido.

Image 3: A sushi bar plus two small tables with a team of three chefs behind the counter supported by three waiting staff. The service team was shockingly slow, bringing each item one by one including tea! They surely must have heard of a "tray"?

Image 4: There was luckily one menu in English and they were able to speak a bit of English as well. We ordered the Omakase set menu letting the chefs decide from the fresh fish of the day.

Image 5: The first item was an eye-appealling box of nibbles - a mini-cup of seaweed in vinaigrette, grilled fish, vegetables with bonito flakes, and marinade whelk in its shell which was fabulous.

Image 6: Then a sashimi plate consisting of …

Image 7: ... a delicate meat from snow crab. This was my first time having crab meat with such a strong flavour, resembling a bit to egg white! Certainly the highlight of the meal!

Image 9: The hamaguri clam was thin and crunchy but the tako (octopus) was like chewing a thick layer of fat!

Image 10: I asked about the order of eating this plate of sushi and I was surprised that she replied "just eat as you like"! More importantly, I wasn't satisfied about the quality - hokkigai (surf clam), kohada (Gizzard shad), kanburi (amberjack), aji, saba were all ordinary and ika (squid) was unpleasantly chewy. The yellow tsubugai clam was very crunchy but tasteless. Disappointing!

Image 11: The akami (tuna loin) was alright but the toro (tuna belly) was a bit tough for such a fatty part of the fish! On the other hand, the kuruma-ebi (king prawn) was incredibly creamy…

Image 12: … these two were much more pleasant - Uni (sea urchin) was enjoyable and I particularly liked the ikura (salmon roe) which was mild and not salty at all.

Image 13: Next was grilled fish, a silky egg custard, crunchy pickled radish that had a nice balance of sourness and sweetness.

Image 14: It seemed like they messed up our order as well. I only had 10 pieces of my 13-piece sushi set but the miso soup already arrived.

Image 15: They later brought out my last 3 pieces! Anago (conger eel) was another highlight of the night; the tako (octopus) was consistent with the sashimi which was like chewing a big layer of fat; the sweet tamago (egg omelette) was excellent.

Image 16: The unique part was that we had a choice between dessert or rare fish at the end of the omakase.

Image 17: The dessert was a crème brûlée with a thin crust. Perfect! It did however take them forever to refill the cup of tea for us before dessert, and again, they brought them out one at a time.

Image 18: Along with a raisin ice cream garnished with dried orange and sweet pear.

Image 19: Instead of dessert, I tried the dried sea cucumber! It was small but had a deep flavour! I preferred the dessert much more though!
Based on the rather disappointing meal, I had to ask them for a business card to confirm that this was indeed the 3-star that I had booked.

Image 20: The crucial aspect of my sushi experience at Sushi Saito was the progression from light to strong flavour. Maybe our experience would have been better if we had sat at the sushi bar?! In terms of service, the staff were friendly but the quality of service was poor. By the end of our meal both tables were full of empty plates as they couldn't manage to clear one plate!