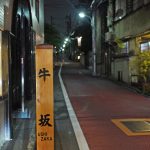 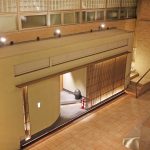 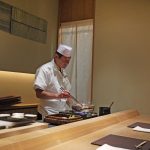 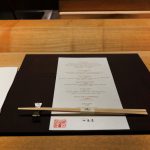 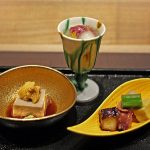 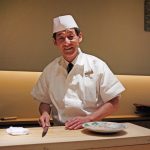 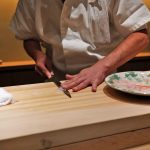 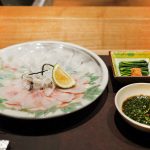 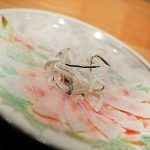 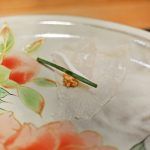 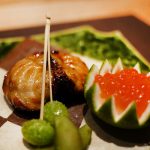 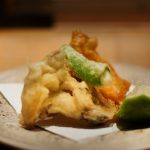 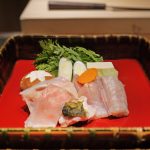 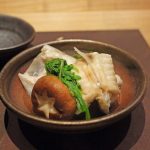 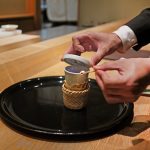 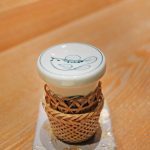 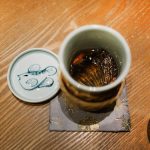 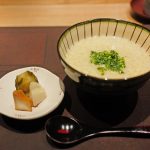 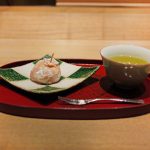 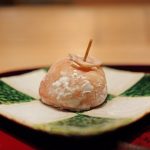 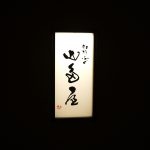 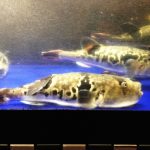 Image 1: Japan’s Chōme-ban-gō address system is famously idiosyncratic and can be confusing if you’re not used to it. Fortunately, having been to Japan several times, I’ve got the hang of it. Especially with the help of Google maps, finding a restaurant is no longer a challenge for me. On this occasion, the destination I was looking for was situated half-way between two underground stations (my usual way of getting around Tokyo now) and needed a good 15-min walk from either one along a busy main road.

Image 2: If you were visiting Japan for the first time, there’s a good chance you’d turn back after finding yourself in an unlikely neighbourhood such as this. From experience, I knew that many of Japan’s top restaurants are in quiet and unflashy spots, often residential, so I carried on. It wasn’t long before I saw what I was expecting – signs of a restaurant at the entrance of an apartment building.

Image 3: A few more steps, and there it was - in the basement at the end of the driveway! A slightly unusual place for a restaurant - especially a Michelin 3-star restaurant!

Image 4: There was a warm welcome from the staff and the chef, who immediately went into action. Chef Fumie Yamada is the 3rd generation of his family to specialise in serving fugu, a poisonous pufferfish. The fugu is from the chef’s hometown, Oita, where the flagship restaurant is located. Interestingly, serving fugu is strictly regulated and can only be served by a qualified chef – though this is hardly a surprise when you learn that the liver, ovaries and eyes of the fugu is more than 1000 times more poisonous than cyanide!

Image 5: The restaurant consists of one private room, which had 4 guests that night, and a counter area which could sit up to 7 – though I was the only guest on this occasion. After all, it doesn’t matter how many Michelin stars you have, there can’t be that many people who are attracted by the idea of paying US$200 (on a weekday!) for a chance of dying! The team spoke little English but – thankfully - they had my menu printed in English!

Image 6: It wasn’t long before the appetizer arrived. It certainly looked good! Sitting in a round, gold bowl was walnut tofu with wasabi soya sauce – a lovely, nutty taste, though the piece of sea urchin on top was rather bland. In the yellow, leaf-shaped bowl was mixture of octopus, yam, okra and wheat gluten, all dusted with yuzu zest – an interesting and fun blend of textures. The tall cup had crab, sweet nashi pear balls and chrysanthemum, encased in tomato jello - the refreshing pear and tomato was well complemented by subtle crab nuances.

Image 7: While I was enjoying my appetizer, Chef Fumie was preparing the fugu. This is a serious business for the chef. Not only is the life of the diner potentially at stake, but there’s also a legend that if a customer dies from eating fugu, the chef must commit ritual suicide! Actually – on a more serious note – there are a few incidents of fugu poisoning each year, occasionally fatal. Despite this, there’s still sufficient demand for Chef Fumie’s expertise to keep the business thriving.

Image 8: It was quite fun to watch his knife-work, slicing fugu to ultra paper-thin strips.

Image 9: Fugu sashimi with monkfish liver, chives, and a sauce made with Kabosu citrus, radish, hot pepper and ponzu vinegar. Monkfish liver is used, as fugu liver is the most poisonous part of the fish – something people eat to commit suicide!

Image 10: Slices of raw fugu were nicely plated with shredded fugu skin in the centre. The outer skin was black, and the inner skin was translucent, giving a delicate-crunchy texture.

Image 11: The waiter suggested I roll the sashimi with a bit of monkfish liver, chive and skin before dipping into the sauce. The outer skin was very similar to the shredded pork skin I often come across in Vietnam cuisine, nothing very special. I don’t like to say it, but this has to be one of the blandest and most characterless dishes I've ever had. Without the sauce, the fugu is almost tasteless - just texture. Disappointed.

Image 12: The main body of the fugu was grilled with Teriyaki glaze, then served with Ginkgo nut, edamame and salmon roe. It’s very tough meat for a fish! I enjoyed the sweetness of the sauce, but – again - the flesh itself was completely bland!

Image 13: Then a tempura preparation. Fugu tail with bone, maitake and sweet green pepper, all lightly battered and deep fried. Once again, nothing to write home about!

Image 14: The main part of the meal is the hot-pot preparation of the fugu head and inner skin.

Image 15: The Chef boiled it on the side for me, then plated and served it. It's basically a big chunk of bone with some meat on the side, served with Chinese cabbage, shitake, carrot, chrysanthemum and tofu. I've had boney fish since I was young, so I had no issue with getting the meat from the fish head piece by piece, using my mouth. That wasn’t the problem. The problem was, in this case it had much more bone than meat!

Image 16: Now, the manager came over, and invited me to try a fugu sake on the house! I was game! He quickly put it on the flame before closing the lid – the idea being to burn off some of the alcohol before serving.

Image 18: Inside was sake infused with fugu fin! Fishy, smoky, intense… not really my thing but fun to try. You only live once!

Image 19: The main course of the meal was a congee – rather like a rice porridge, but made with eggwhite and the remainder of the fish! It was served with pickles on the side, which was just as well, because the porridge itself had a very muted – you might almost say insipid-flavour.

Image 20: A very simple dessert, served with a small cup of tea…

Image 21: … a persimmon daifuku – a soft, round ricecake, persimmon-stuffed with sweet red bean in the centre. Very light, and not overly sweet. But at least I don’t have to use the B-word (bland!) again. Actually, I quite liked it, though I’m not in hurry to have another. And that was the end of a rather dull, expensive and overrated meal.

Image 22: A meal, to be honest, so deficient in any kind of assertive taste that, by the end, I was craving for a pinch of salt in my mouth! Now that I’ve done some post-meal research, I find that I’m not alone! Apparently, the fish is so plain that the main thing about it is its texture. However, some diners claim that they experience a slightly intoxicating effect from the tiny amount of poison which makes eating fugu enjoyable. And some eat it for the sake for telling friends that they ate a poisonous fish. Frankly, I don't see any real culinary value.

Image 23: Post script…funnily enough, on my walk back to my hotel, I passed another restaurant, proudly displaying a tank of live fugu. I wasn’t tempted to try again! But a night rich in fugu fish, all the same!