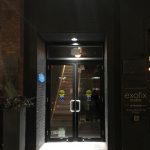 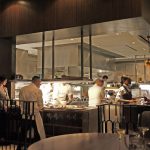 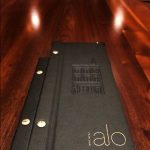 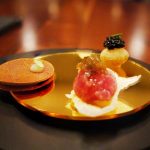 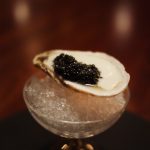 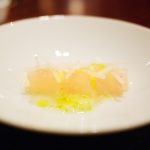 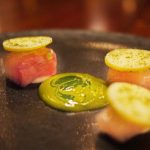 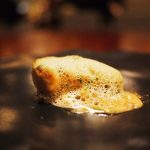 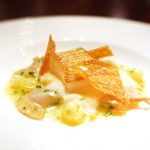 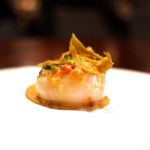 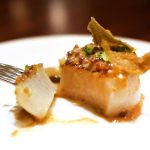 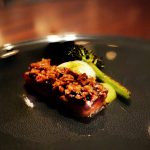 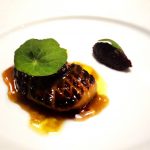 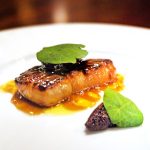 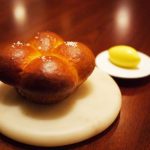 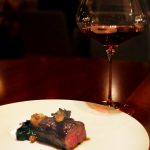 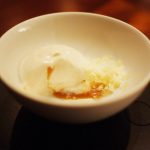 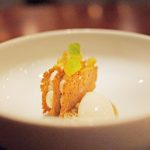 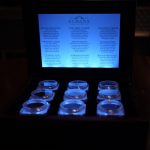 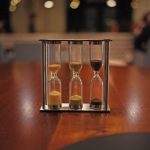 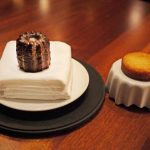 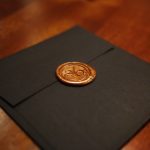 The subject of this review – Alo – is the only restaurant in the country to have made it into the top 100 of World’s 50 Best in almost a decade. It’s also one of the very few restaurants in Canada which is listed as part of the Relais & Château group (which has over 500 establishments worldwide). Its success is down to its owner and Chef, Patrick Kriss, who opened it in 2015, after training under Daniel Boulud, as well as in two Michelin 3-star establishments, Troisgros and Regis Marcon, both in France.)

We started with a collection of little surprises – big eye tuna with smoked pepper, artichoke purée with preserved lemon, Venetian caviar resting on pommes soufflé. . . I have to confess that I’m partial to that kind of thing. Next came an oyster from New Brunswick, served on its shell and topped with a huge spoonful of Venetian caviar. It looked delicious. Sadly, a feast for the eyes was all it turned out to be, as it seemed to contain more sand than caviar! It was like biting into a sandbag. Despite this, I tried to eat it, but it was impossible. Not only did my mouth feel like a cement mixer, but my teeth were grinding on the sand so loudly that even the diner on the next table noticed – turning round and asking what was in my mouth! Eventually I had to tell the waitress that I needed to visit the washroom for a rinse-out. However, it seemed that I’d just had bad luck, as my dining partner’s oyster was perfect – she said afterwards that it was one of the best parts of the in the meal. What a disappointment, as I’m an oyster fan. Still, I guess it was just one of those things that could happen anywhere, and has nothing to do with the standard of cooking. You can’t expect the chef to run an ultrasound scan on each oyster as it’s served!

Oyster incident aside, the meal was of a very high quality, overall. Every element was expertly prepared – the slices of cuttlefish, for example, were beautifully soft and tender, while the jumbo scallop (from Boston) was precision-cooked, so that it was deliciously moist in the centre. The foie (from Quebec) was perfectly seared, giving it a nice crispy skin while retaining its inner silkiness. And it wasn’t only the texture of every course that was outstanding, the flavours were all enjoyable too. The use of pear and yuzu on madai (red sea bream), the pairing of chanterelle with scallop, and the contrast between the acidity of bayberry and the sweetness of sherry with the rich foie, all made for a very impressive, and very enjoyable, balance of flavours throughout the meal.

On a slightly less positive note, there were some ingredients that didn’t do a whole lot for me. As I had expected, the Wagyu beef (aka American-style Kobe beef) from Idaho was nothing like the beef in Japan, while Matsutake mushroom is always overrated – and this one from British Columbia was no exception. My least favourite ingredient was the Little Neck (East coast) clam, which was so tough and chewy that I left most of it untouched.

Alo is situated on the second floor, above its more casual sister restaurant (Aloette). To enter, we went through a narrow door next to Aloette which was jam-packed with people and vibrating with pounding music. We then took an elevator, which could have used a fresh lick of paint, to the second floor, where the doors opened into the bar area of the restaurant. As this, like Aloette, was alive with music, it wasn’t easy to hear what was being said to us by the receptionist who greeted us, so we simply followed her to the dining area, passing some diners who were eating at the kitchen counter. It was something of a relief to find that the dining room was considerably more pleasant, even though the floor and ceiling surfaces did an excellent job of reflecting sounds of every kind – from the conservations of other guests, to the insistent rattle of cutlery and dishes. It didn’t help that the place features an open kitchen layout. So yes, it’s a noisy environment – but I imagine that it’s an intentional effect, an attempt to create an ambience that’s energetic and exciting. And, to be fair, they’ve been quite successful in that respect.

As to the service, it was a pretty slick and efficient machine. When dishes for a table were almost ready, a row of staff would queue up along the wall, collect them and deliver them. Watching them work was like watching a military performance – every step, every action, had a purpose, from putting down the menu to removing a wine glass. Plus, they must have had some of the fastest-speaking waitresses in the country! But, despite their efficiency and organisation, the Front of House team didn’t lose their friendliness – they had clearly been expertly trained. It was also great to see Chef Patrick make a real effort to greet every customer on arrival, while keeping control of his kitchen.

A well-planned and executed meal, with a good balance of flavours and which showcased some of the best ingredients the country has to offer. The tasting menu is very innovative, and incorporates many Asian flavours by using ingredients such as raw fish, yuzu, ginger, Thai green curry, Vietnamese coriander – and even Sichuan pepper and five spices. The ambience of organised chaos might not suit everyone, but most diners who come here are more concerned with the food than the surroundings. Usually, if I’ve enjoyed most courses in a long tasting menu, it’s a very good sign.

There’s no Michelin star rating for this restaurant, for the simple reason that the Michelin Guide doesn’t cover Canada. However, based on my decade-long experience of eating in Michelin starred restaurants, I’d say Alo’s definitely better than 1-star quality, and might reasonably be considered as a 2-star in terms of the European Michelin Guide standard (definitely a 2-star in the Asia Michelin guide!). This, of course, assumes that the establishment is judged on the basis of food alone, as the Michelin Guide often claims is the case (a claim which, as many readers will know, has never convinced me, and still doesn’t).