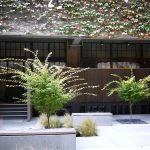 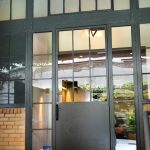 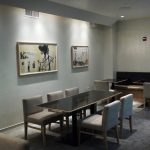 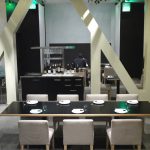 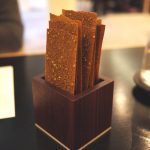 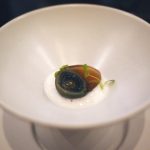 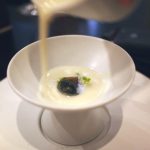 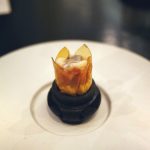 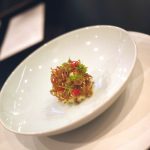 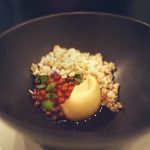 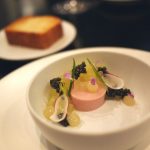 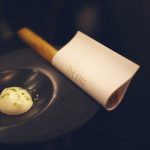 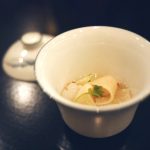 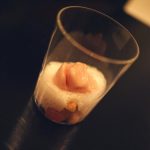 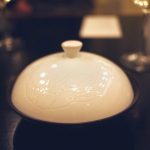 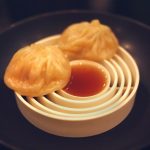 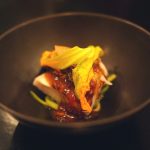 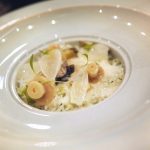 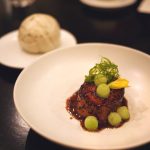 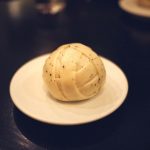 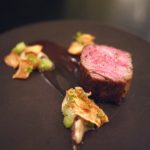 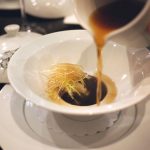 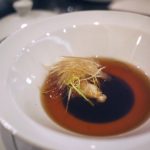 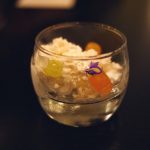 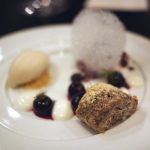 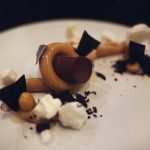 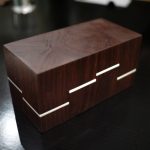 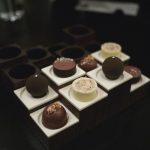 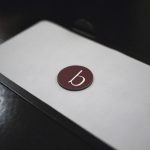 Image 1: Tucked away in the South Beach neighbourhood of San Francisco on a small street full of office buildings and parking lots, a garden suddenly appeared of nowhere. It was the baby of Corey Lee, who left French Laundry shortly after our visit 4 years ago and he spent a full year to establish a place of his own.

Image 3: Corey was heavily involved in setting up his restaurant, from the position of the trees to the design of every single piece of serviceware. Suggested by his sister, Benu means phoenix in Egyptian, a symbol of rebirth like Corey's evolving cuisine. Corey particularly likes it as Benu sounds both French and Japanese, reflecting a mix of east and west.

Image 4: The interior is modest, the high ceiling and steal beams provided a very cold atmosphere. Especially without any tablecloths, the wine glasses on the table were probably the only thing that distinguished this 2-star dining room from a warehouse canteen!

Image 5: Benu only serves one tasting menu on Fridays and Saturdays.

Image 6: Buckwheat lavash with nori and sesame as a quick snack.

Image 7: Our first course was a brave and warm start - thousand year egg, resulted from a traditional Chinese preserving method. With a strong odour, this type of black egg is definitely an acquired taste.

Image 9: Seemed like another Chinese influenced dish, a Shumai (a pork dumpling dim sum) looking second course. The wrapping was actually kimchi shell; enclosing inside was a warm pork belly cream topped with an oyster. Nice idea but the pork belly and oyster combo were too salty!

Image 10: Potato salad with anchovy. A rather ordinary potato salad ball coated with caramelized anchovy. I liked the crispy and sweet tiny anchovies!

Image 11: These wild salmon roe would be too salty by itself but blended very well with eggplant purée. In addition, the buckwheat brought in a crispy texture while those flakes of perilla leaves added a distinct flavour to the dish. The best course so far!

Image 12: We were there shortly after foie gras was banned. Maybe that was why chicken liver was used?! Steamed in rice wine accompanied by fruity green apple balls, crunchy radish, and scattered with Osetra caviar. It must have been better with a rich foie as the flavour of chicken liver was not deep enough and the brioche was too buttery for chicken liver.

Image 13: Eel wrapped in feuille de brick, accompanied by lime and crème fraîche. The deep fried wrapping was too thick and oily that we could not notice the small amount of eel inside.

Image 14: Inside the cup was perfectly cooked omasum tripe and shrimp with a crunchy texture. The lovage and yellow chive sauce was brilliant with a hint of white pepper stimulating the tongue. A very nice course!

Image 15: A tomato and plum sorbet before a series of main courses.

Image 17: Served in a very smart steaming utensil with vinegar dipping in the middle! Wow, great sensation from the burst of concentrated coral broth in my mouth, but maybe a bit too intensive as it overpowered the lobster filling.

Image 18: A Chinese dish, salt and pepper squid, but in amuse bouche form. The squid ink cracker had a garlic after taste. I understand Corey's intention to mimic the Chinese dish. The texture perhaps, but the flavour wasn't quite there.

Image 20: We expected this abalone blanquette on rice to be a highlight, but the white sauce was very ordinary and the burst of acidity coming out from the lemon pulps did not go well with the rice at all.

Image 21: Medallion of duck cooked in shaoxing wine, decorated with little cucumber balls. We could sense a little bit of truffle aroma in the sauce.

Image 22: The best part of the course, and probably the whole meal, was the bread he paired with this course, a black truffle Chinese bun. It had truffle sauce in the centre with seductive fragrance steaming out! Maybe too big a bun for an 18-course tasting menu but I wouldn't complain!

Image 23: The second meat course was beef rib, it was well marbled but the flavour was lacking and the steak sauce, on the contrary, was too strong. I also didn't like the crispy lily bulbs which disturbed my enjoyment of the soft texture of the marbled beef.

Image 24: This was no ordinary "shark's fin" soup -- the soup base was made with Jinhua ham and the fins were actually just hard jello made with the ham broth. Clever!

Image 25: The broth was delightful; the Dungeness crab was delicate; the jello fins were fun; but I had no idea what that truffle custard was doing at the bottom.

Image 26: A pre-dessert of melon, sake, and pine. The melon flavour was intense, followed by a heavy dose of bitterness from sake, it really reminded me of cough syrup. I had to drink a sip of water to wash down the overwhelming after taste.

Image 27: A disastrous warm savoury dessert! Imagine this combination: spice cake, nutty oatmeal ice cream, fruity blueberry and sour yogurt. Both the presentation and the flavours were simply all over the place! We left it half untouched and gave our honest opinion to the manager.

Image 28: He apologised and gave us a different dessert. Now imagine this combo: chocolate ganache, peanut butter cream and miso ice cream. Really?! Not only was the peanut cream way too much, the whole savoury-sweetness play just didn't work! None of us like any of the pre-dessert and desserts.

Image 29: I expected, and maybe it could have been more successful, more interesting at least, for Corey to have incorporated some Chinese elements into the desserts. Anyway, the last item of the meal was presented in a rectangular wooden box!

Image 31: I can imagine many man-hours were involved to develop the concept of each dish. Despite being disappointed with courses, I really did like the cuisine! Though some refinement work is needed to harmonize flavours in many dishes, Corey certainly engraved his signature to this east-west fusion cuisine offering a completely different experience to The French Laundry.