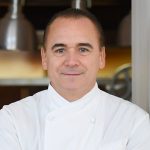 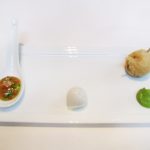 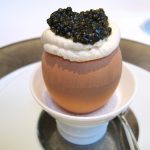 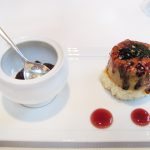 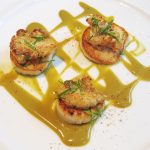 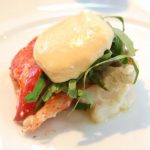 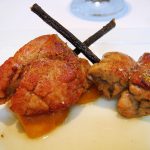 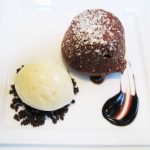 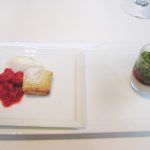 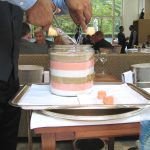 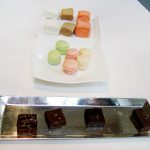 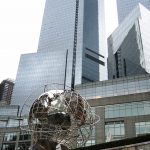 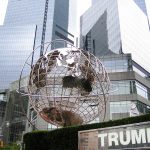 Next time when you are in New York City, why don’t you stop by Columbus Circle for a fine lunch to discover some inventive modern French dishes yet at a reasonable price!

Jean-Georges Vongerichten is one of the world’s leading chefs who consistently set new standards and define culinary perfection. From the outskirt of Strasbourg in Alsace, Jean-Georges was born in a family where his mother and grandmother prepared lunch for 50 employees every day. He developed a vision for his career after his Michelin 3-star dining experience on his 16th birthday. Soon he apprenticed in various Michelin 3-star restaurants in France which led him to a position at the Oriental Hotel in Bangkok. He then opened 10 restaurants around the world from 1980 to 1985.

Jean-Georges appeared in the New York dining scene in 1986. His empire now contains various types of cuisine, from bistro, Thai, steakhouse, to formal French, and all over the world from New York, Texas, Chicago, Las Vegas, to Bahamas, London, Paris, and Shanghai. He had even catered for the wedding of his landlord Donald Trump.

Located in the Trump International Hotel & Tower with a terrace overlooking Central Park, this restaurant already earned the highest rating from New York Times within three month of opening in 1997.

The restaurant is divided into two separate operations: a formal dining room Jean Georges and a more casual room Nougatine. The elegance of the formal dining room is well complemented by a modern French cuisine using top ingredients with influences from around the world.

Our lunch started off with an amuse-bouche: cucumber tomato jelly, cherry tomato mozzarella, and chicken tempura with tarragon puree. It was a unique mixture of textures, especially the refreshing cucumber juice and diced tomato wrapped by a fragile layer of jelly.

Our first course was Jean Georges’ signature dish – eggs on egg. An egg shell with partially cooked yolk, the chef stuffed the cooked egg white back covered with cream, and finally crowned the dish with caviar. The simple taste and the syrupy texture of the egg paired perfectly with the deep sea salt flavour of the caviar. This dish utilized caviar at its best. The sparkling caviar and the rich creamy egg syrup was an unbelievable combination! What a delicate appetizer!

For our second course, we selected different dishes. One dish was foie gras brulée sitting on top of a toasted brioche and garnished by drops of spiced fig jam. This generous portion of terrine was cleverly covered by a hard shell of caramel. It was the first time we had caramel with foie gras. The smooth foie gras together with the brittle caramel sweetness resulted in a wonderful and an inventive dish.

The other dish was sea scallops with caramelised cauliflower and caper-raisin emulsion. Each scallop was carefully decorated with a floret of cauliflower on top. The perfectly cooked scallops accompanied by crunchy caramelised cauliflowers offered an interesting mixture of taste and texture. The slight acidity from the caper sauce brightened the dish even further. The sommelier suggested a glass of white Bordeaux “Chateau du Seuil Grand Seuil Blanc 2003” for this course. This crispy and refreshing wine with vanilla and apricot flavours enhances the delicacy of this scallop course.

For the main course, we chose a sautéed Maine lobster and a caramelized sweetbread. The lobster was beautiful by itself, but the sauce was heavily spiced. The citrus-chili emulsion was interesting, but it was better to have the lobster without the sauce to truly admire its freshness.

The caramelized sweetbreads were skewered in dried licorice sticks with sliced fragrant pickled peach sitting underneath. The flavour of the pickled peach blended in very well with the elastic texture of the sweetbreads, but the licorice was rather subtle.

The pastry chef prepared a desserts menu of four choices: Fig, Stone fruit, Strawberry and Chocolate. We selected the Chocolate and the Strawberry. The Chocolate was composed of two dishes: Jean George’s chocolate cake with vanilla ice cream and coffee-cardamom meringue covered by a layer of chocolate. We loved the distinct aromatic of the cardamom. Both were quite heavy and rich, but we have no regret of ordering such delicious desserts!

The Strawberry was composed of two dishes as well: a strawberry shortcake with crème Chantilly and a strawberry consommé with litchi gelée. The gelée was covered with granite made with Anise-Hyssop, a North American herb in the mint family. It added a refreshing touch to the dessert, a pleasant way to end a heavy lunch.

At the end of our meal, we were offered three kinds of petits-fours: home-made marshmallow, macaron and chocolate.

The service was good, but not as meticulous as I would expect from this world class restaurant. However, we were there for lunch. The atmosphere is tailored toward business clientele. Dinner service would definitely be more formal and professional.

Closed on Saturday lunch and Sunday all day.
Lunch: $38 for two courses; $12 for each additional course
Dinner: 7-course tasting menu: $168