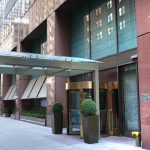 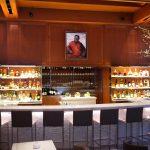 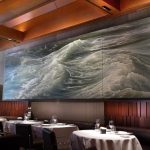 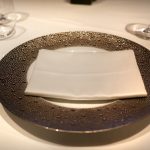 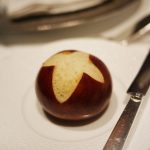 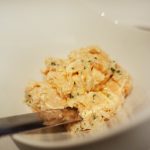 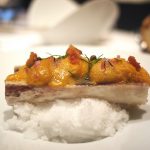 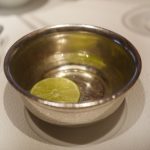 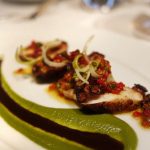 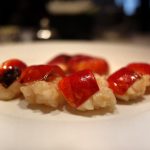 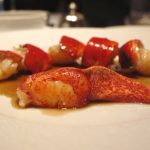 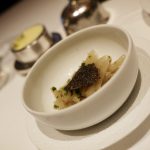 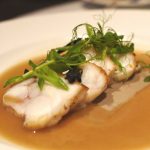 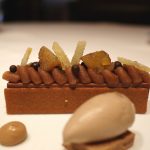 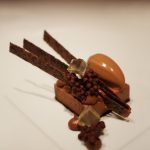 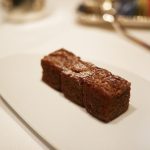 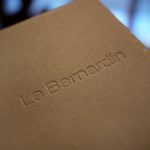 Image 1: I thought I would never come back here after my visit seven years ago but since I continued to read raving reviews of this being the "best seafood restaurant in World", I had to give it another chance.

Image 2: Though they had closed this place for a month to renovate back in 2011, it didn't seem to change much. Same seafood oriented cuisine, same formality at the front of the house where sommeliers still have to chain a silver tastevin around their neck, and the same bar area with the portrait of the owner Ms. Le Coze’s grandfather.

Image 3: The main renovation work was in the dining area where they now modernized the setting from floor to ceiling and even installed a huge 24-feet seascape painting as a backdrop. During lunch that day the dining room was occupied half by tourists and half by businessmen. Every table had a booking with many tables turned for two sittings!

Image 4: The tasting menu was available during lunch but while we were in town during a weekday, we took advantage of their good value 3-course lunch menu with more than ten choices for each course! With two of us ordering different items for each course, we pretty much built their regular tasting menu ourselves but with far less the damage on my wallet.

Image 5: There were eight choices of bread including classic baguette, tomato, olive, and this warm pretzel bread.

Image 6: Other than salted butter, they also offered a small bowl of salmon paté for our bread although no amuse bouche was served.

Image 7: First course was "Surf and Turf" served on the bone. A layer of roasted bone marrow completely covered by a very generous portion of sea urchin garnished with pickled onions, capers, and bacon crisp. Though we were spoiled by Hokkaido sea urchins the night before at Brooklyn Fare, this Santa Barbara sea urchin was not bad, just didn't provide as clean and elegant flavour on the palate. Still, I loved this extravagant version of "Surf and Turf"!

Image 8: This course came with a finger bowl as I had to hold on to the bone to scoop out the marrow.

Image 9: Charred Octopus with a vierge sauce made of sundried tomato and basil. The octopus was very tender without any trace of chewiness while the green olive and black garlic emulsion was unnescessary.

Image 10: Within a $15 supplement, I got the lobster course. The quantity was good, the quality was fresh,…

Image 11: … the preparation was superb and even the whole claw was deboned, but the "sauce Americaine" that he poured on top was utterly salty! We both had the same reaction and quickly pointed it out to our server. Unfortunately, his only reply was "OK" and walked away! Well, I removed the lobster from the sauce as much as I could and I was glad that the lobster was beautifully cooked and perfect to be enjoyed on its own.

Image 12: This course came with truffled salsify on the side. Though the truffle was very weak, at least it was edible without an overdose of salt.

Image 13: The other main course was a pan roasted Monkfish with black trumpets purée underneath finished with an Armagnac black-pepper sauce. Monkfish is a very thick and meaty fish, definitely not the easiest fish to cook right. They did it very well here and the centre was not tough at all.

Image 15: And finally, their version of Chocolate millefeuille. Contrary to the name of "thousand sheets" of pastry, there were only three strips of caramelized phyllo pastry leading a square of salted milk chocolate ice cream and cubes of thyme gelée.

Image 16: A simple petit-four of orange-chocolate brownies to accompany our tea.

Image 17: The service team wasn't friendly at all; none of them had any smile on their faces just focused on getting their job done in a slightly rushed way. After my second visit, I still have no idea why people often described this restaurant as the "best seafood" in the country or often the world! Sure, the seafood for each plate was carefully cooked, but everything else was ordinary with a few obvious flaws on my both visits.