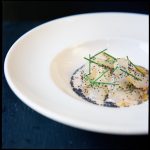 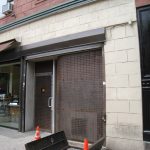 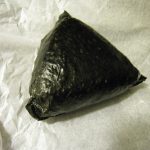 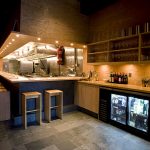 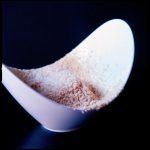 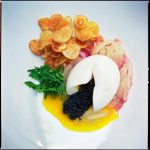 After a superb meal at David Chang’s Momofuku Ssäm Bar the night before, we were really looking forward to experience his elaborate cuisine at the 2-star Momofuku Ko. Unfortunately, if you don’t know what “cooking without heart and soul” means, Momofuku Ko will give you a full understanding — go in, hand over your proof of reservation, watch the robotic chefs assemble your food, eat and pay $500 for two, then get out!

A bad meal begins with a bad impression. Look at this terrible restaurant entrance!

It was extremely difficult to get a reservation at this 10-seater restaurant and I guess that was why the servers, who never learnt how to smile, were cold and arrogant! Come on, providing a friendly service doesn’t cost them anything does it? Obviously David wanted to keep his restaurant simple, but shouldn’t customers deserve what they pay for? Not only was it uncomfortable to sit on a bar stool for four hours, most courses were eaten using the same pair of cheap Chinese take-away chopsticks and they even refused to change a new pair for me after six courses! Why would people go through the trouble of getting a reservation and paying through the roof for such a poor dining experience… Well, I guess I was one of those victims!

They have a no-photo policy but their PR team was nice enough to send me these photos by Gabriele Stabile. Note that these are staged photos. From our experience, the plating for all of our courses was far below this standard!

One of David’s famous course, even mentioned in TIME 100 – “Only David Chang would grate frozen foie gras…” However, the person who wrote this probably had not even heard of Joachim Wissler, a German 3-star chef at Vendome who had a similar dish on his menu since many years ago!

Most of the dishes we had were very oriental – Japanese, Chinese, and Korean. So, why is this place so special? Maybe because Asian flavours are new here? No, this is New York City, it has one of the most diverse food cultures. Then maybe because not many places in town offer tasting menu? No, this is New York City, not only does it has many elaborate cuisines, they all provide comfortable seats, friendly service, and even cheaper price! Well, I am still puzzled until this day!

This staged photo was a bit misleading with the extraordinary amount of caviar as I didn’t see any in all of our courses.

There are many tiny counter-seat restaurants in Japan where the chef treats the place as their home and treats each customer as their dear guest. But this spirit, once might have been existed at Ko, must be long gone! It is now probably just a money-making machine for David!

On our way out, we got a souvenir which made me wondered if David has ever had a proper onigiri before. If it wasn’t meant to be consumed immediately, it should have been wrapped in a way such that the the rice is separated from the seaweed so that it would remain crunchy! After a quick bite, straight into the bin! What an insult to Japanese food!

Don’t get me wrong, David’s Ssäm Bar and Noodle Bar were genius creations, but charging the price of Daniel for a hole-in-the-wall cheap production with depressing service, something wasn’t right here! Lucky for those who couldn’t get a reservation here!