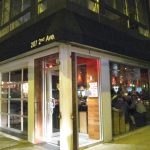 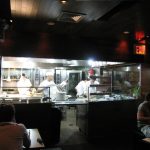 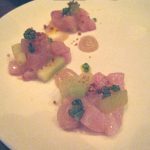 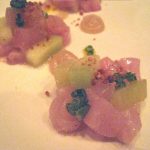 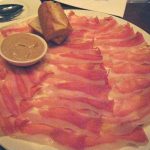 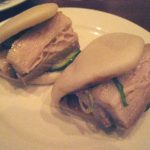 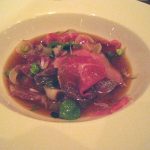 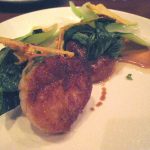 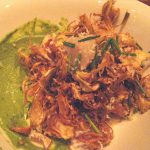 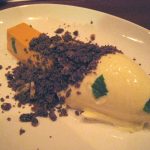 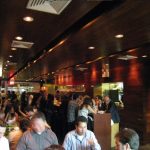 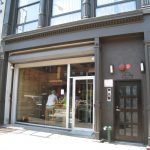 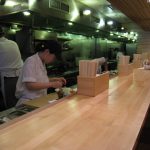 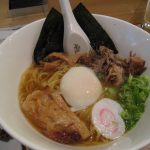 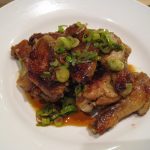 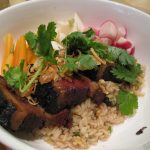 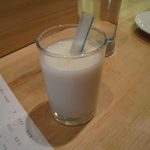 Image 2: We thought it was too late for dinner as our flight didn't arrive until 10pm. But at David's Ssäm Bar, anytime can be dinner time! Even at midnight, the kitchen was still in full action and a 10 min wait to get counter seats for two!

Image 3: We sampled a bunch of plates. First up, Spanish Mackerel with melon and mustard, finished off with caramel dust. Wow, for only $12, I didn't expect such a beautiful plating along with our server's detailed description of each ingredient!

Image 4: Freshness of the mackerel, sweetness of the melon, slight kick from the mustard and tiny crunchiness from the caramel -- what a beautiful combination of flavours and textures! I am willing to pay £25 for this plate any day. Glad that we didn't eat anything during our long flight!

Image 5: Our server said Spain and Italy are not the only ones to produce good quality cured. Americans make good cured ham too and suggested us to try Edward's Wigwam Country Ham from Surry, Virginia. Too big a plate for two of us but it was indeed very good!

Image 6: Of course we had to try David's famous Steamed Pork Buns. His idea came from Peking Duck but he uses pork belly instead. We were glad that it wasn't as greasy as it looked. Like Peking Duck, it had Hoisin sauce, cucumbers, and scallions, but it totally lacked crispiness and aroma compared to the real Peking Duck in Beijing!

Image 7: Shaved Dry Age Sirloin with fava beans and rhubarb in a lemon verbena broth! Innovating stuff! Shaved beef does appear in Chinese hot pot or Vietnamese Pho, so it is not that unusual. But shaved beef in a fruity broth is totally unheard of.

Image 9: Fried Baby Artichokes with pistachio and avocado cream. It was dried and chewy rather than crispy. The worst dish of the night.

Image 10: A superb dessert - Thai Iced Tea Parfait with lemon mascarpone topped with almond and tea crumbs! The Thai Iced Tea custard on the left was made with star anise and tamarind. A strong and refreshing finish to our meal!

Image 11: This place was still full house by the time we left at 1am! Where did all these people come from? Right, it's New York City, man!

Image 12: Just a side note, we also visited David Chang's first restaurant Momofuku Noodle Bar during our this trip. It's another great place to eat in town.

Image 13: Similar setup with counter seats and a few tables.

Image 14: The famous Momofuku Pork Ramen. Though not as great as pork ramen in Japan, it was good enough to satisfy our high expectation and the portion was enormous! Plus, the poached egg had a unique texture due to slow cooking!

Image 15: No wonder David is so successful, these Smoked Chicken Wings were simply delicious.

Image 16: And the Slow Roasted Beef Brisket too. It was fork tender! Again, big portion. These few dishes were more than enough as a lunch for two.

Image 17: To wrap up our lunch, we tried one of the Momofuku's beverage creation - Lychee Soju Slushie. An enjoyable meal at David's restaurant!