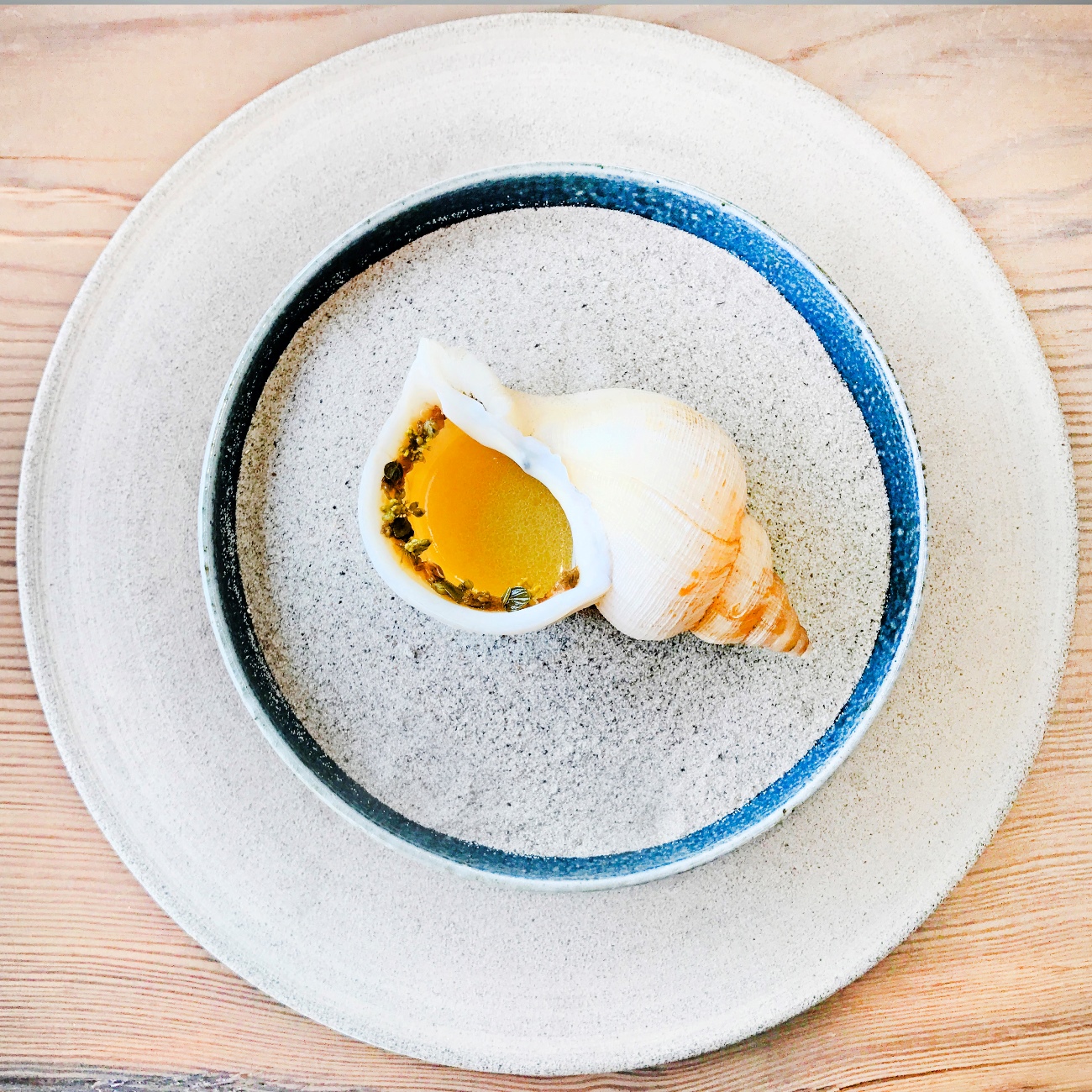 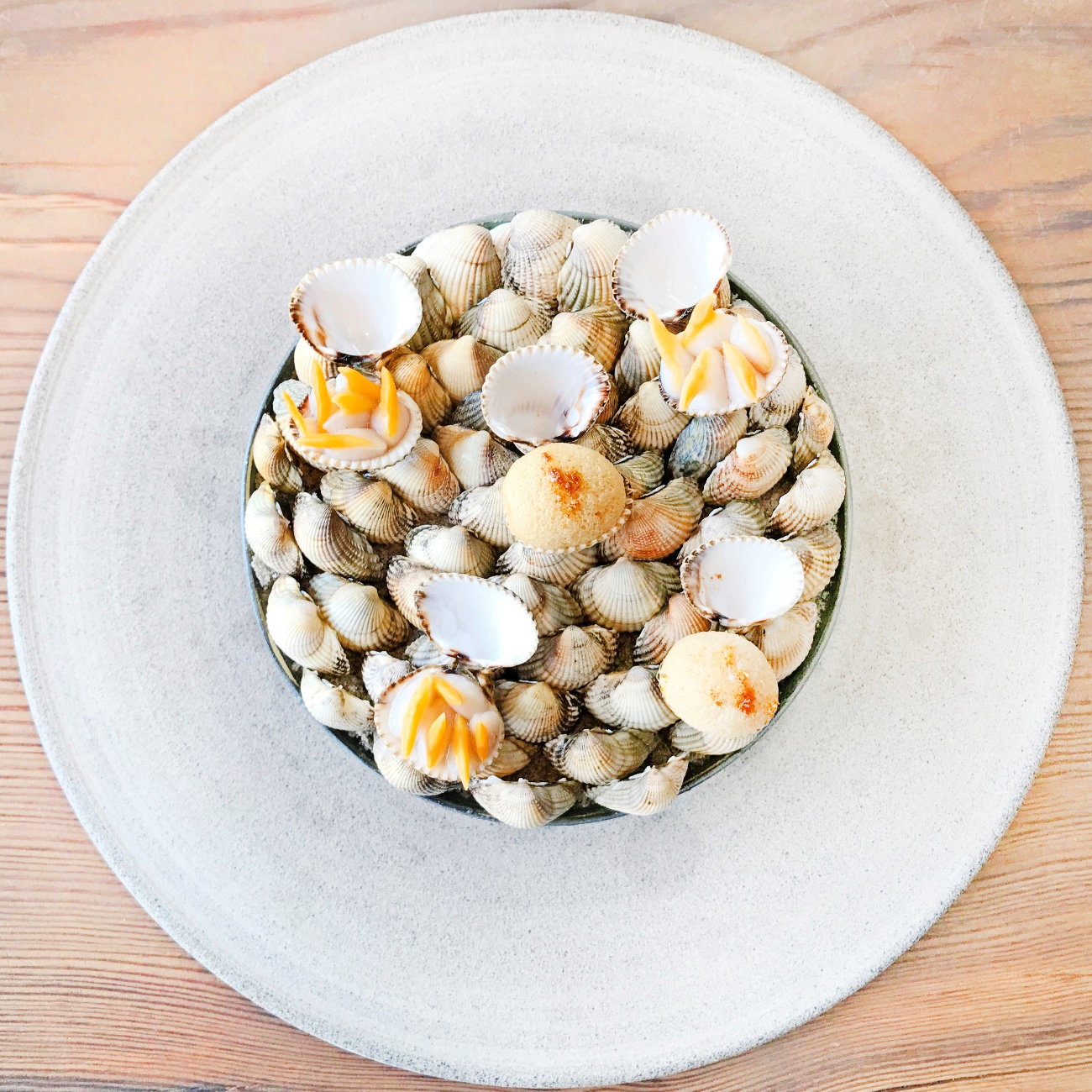 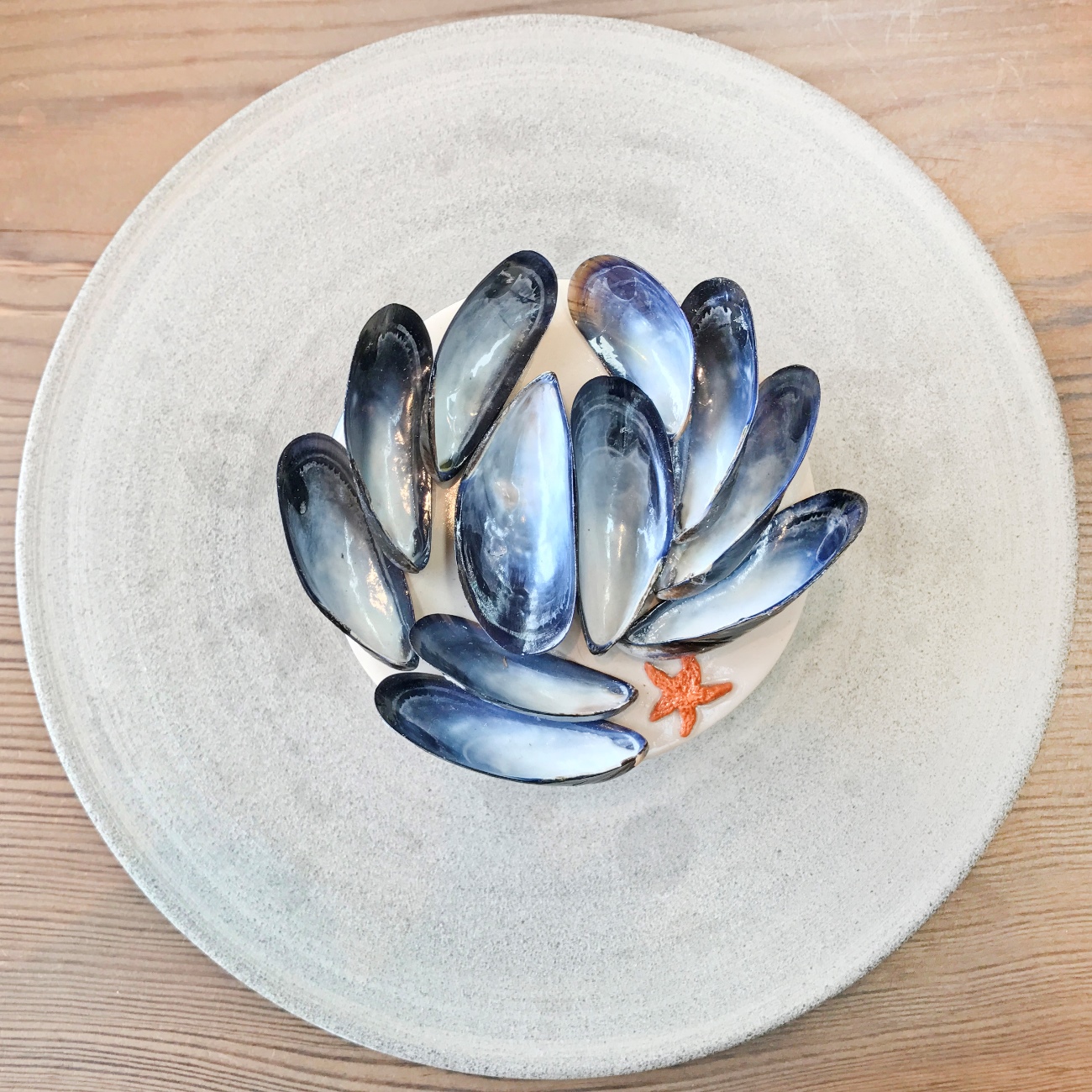 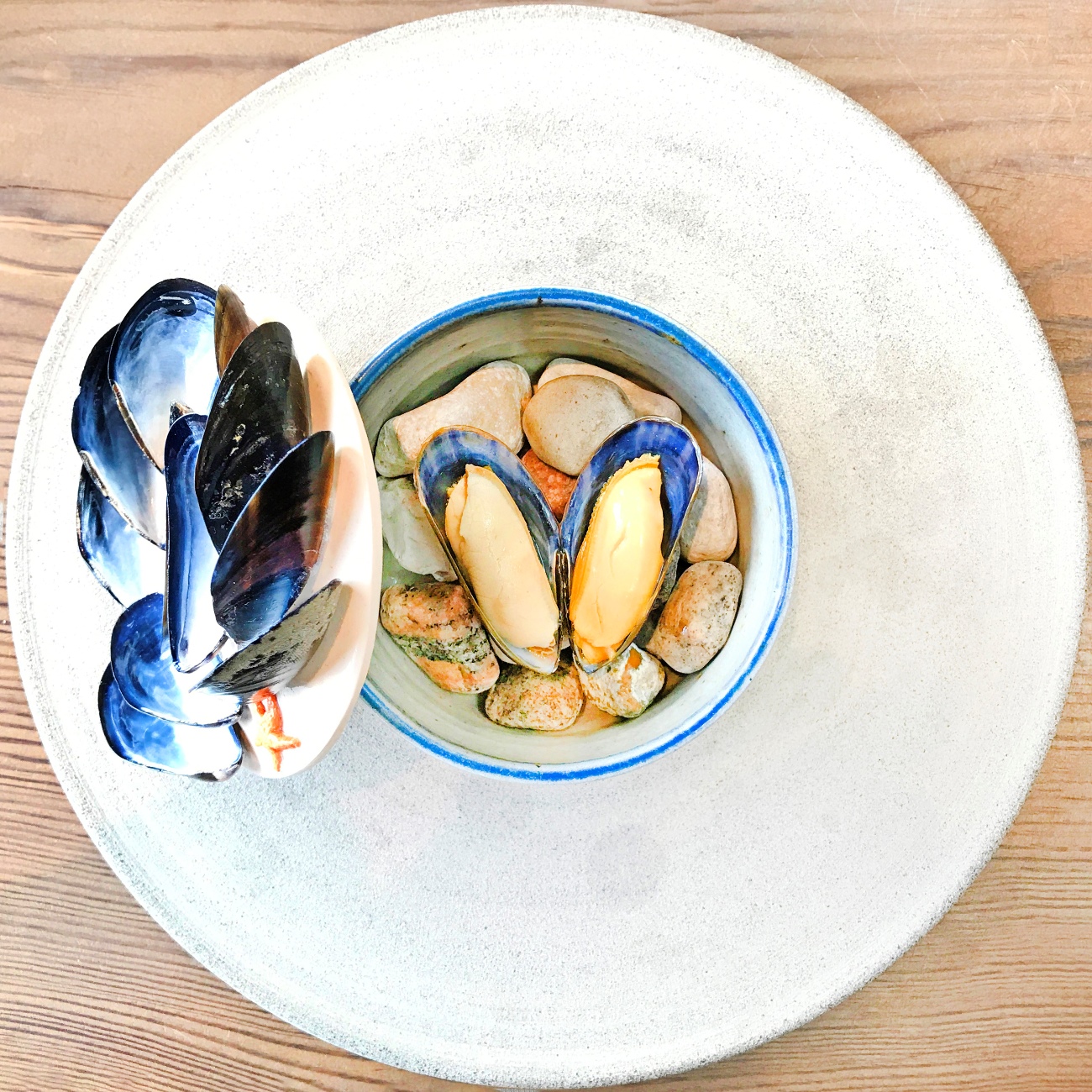 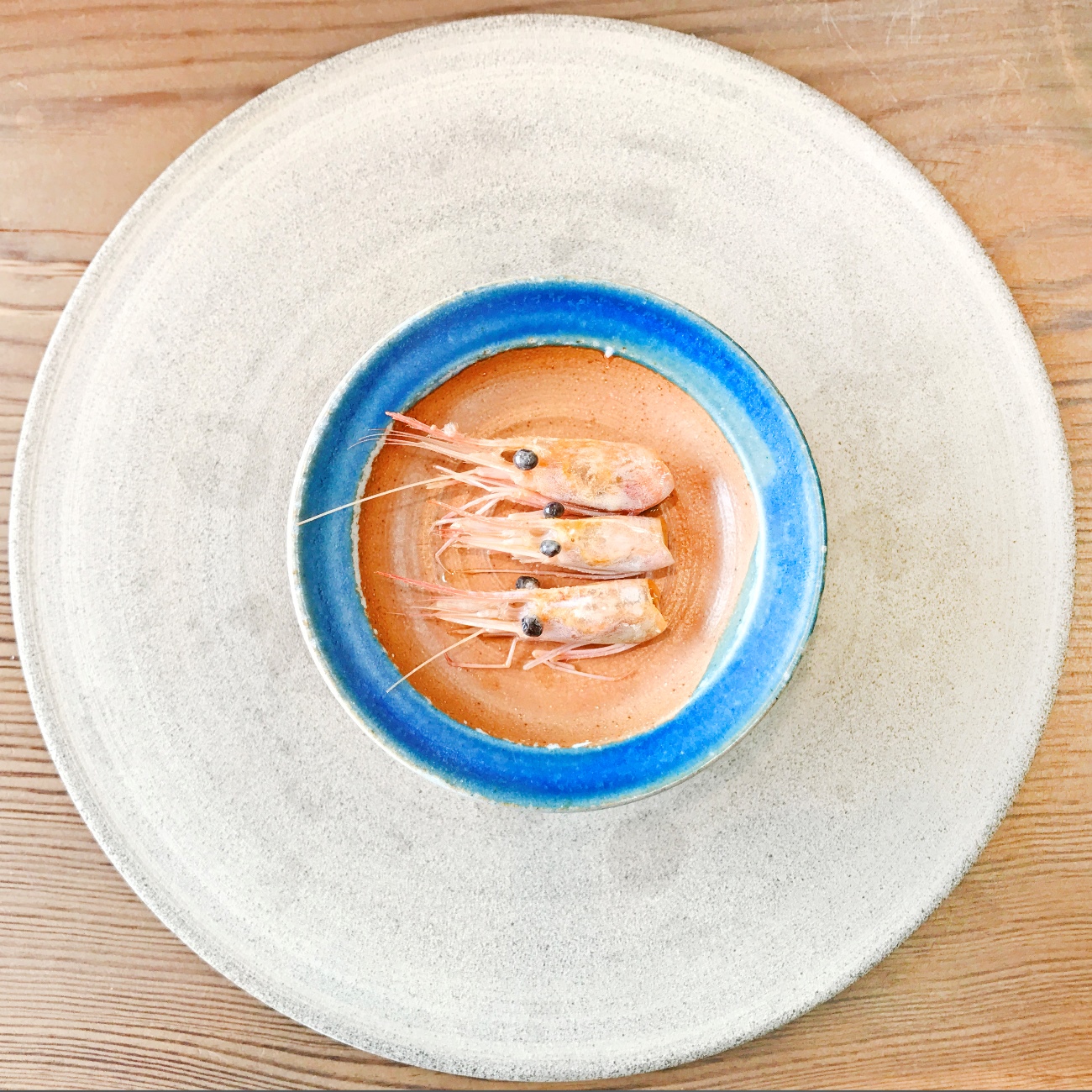 Noma is one of those places where it’s extremely difficult to get a table.  On this occasion, I got lucky as my friend at Xtreme Foodie managed to secure a reservation and was kind enough to invite me to his party. I wasn’t about to refuse such a generous offer. After all, Noma was crowned the World’s Best Restaurant in 2010, and was responsible for sparking the “New Nordic cuisine” trend that influenced an entire generation of young chefs around the world.  (Technically, of course, it wasn’t really the restaurant itself that created the trend – it was actually the World’s 50 Best list. That’s because it’s the list that has such a massive group of followers, and whatever restaurant is listed as #1 will become the trend.)

The restaurant had reopened after being shut down for a year while a new site was prepared in a more urban part of Copenhagen. These days, celebrity chefs are pretty smart in utilising their worldwide fame. Rather than lose money during a relocation process by paying the salaries necessary to retain a full team, they open pop-up restaurants in different locations. Take The Fat Duck, for example. Heston Blumenthal established a pop-up in Australia while the place at Bray (UK) was refurbished in 2015. Noma did a similar thing in Japan in the same year, and again in Australia in 2016. They also ran a temporary operation in Mexico, before settling back in Copenhagen. And even during those first few months of being back home, they opened a nearby pop-up, serving casual food, while the new site was fine-tuned. As you can probably imagine, reservations at every one of those overseas pop-ups were immediately taken, even at their jaw-dropping pre-paid menu price.  If you can generate global publicity, while making money at the same time, you’d be crazy not to do it.

The new site of Noma is, not to put too fine a point on it, huge.  And, as soon as we’d entered the restaurant, we received a big warm welcome from the whole team, including Chef Rene himself. With its open kitchen, it reminded me a lot of El Bulli, where Chef Ferran and his team welcomes everyone in a similar way.

We were then asked to take our seats, as the meal would commence immediately, and told that our visit would finish with a guided tour of the site. This sounded interesting, as Noma has its own garden and fish tanks, as well as a large area that serves as a prep kitchen, where many young staff do tedious tasks such as organising seaweed piece by piece, or neatly arranging pumpkin seeds one by one.

How does the food compare to the original Noma?  Still not my thing.

As I mentioned in my Maaemo review, Nordic cuisine is often described as “purity, simplicity and freshness”. So its typical themes – foraging, local ingredients, minimalism etc. – became so familiar to me that, as with many of my foodie friends, I got a little bored of the whole genre.  This meal was no different, really, except that the menu is designed to reflect the various seasons. Thus, Chef Rene focuses on seafood in the first few months of the year, followed by vegetables in the summer and game in the last part of the year. As it was still not summer yet, our own meal was seafood-oriented and, as expected, all seafoods were sourced from the Nordic regions, including the Faroe Island and Iceland.

The meal itself got off to a refreshing start – sap from a birch tree and a warm broth of Faroese sea snail. This was followed by a series of seafoods – venus clam, mussel, shrimp, cured trout roe, oyster, sea urchin. Garnishes such as green strawberries, dried tomatoes, pickled gooseberries and fermented plum dominated over half the menu, so if you’re not a fan of vinegary flavours, this is definitely not a place for you (at this time of year, anyway).

So, what were the dishes like? Well, the shrimp’s head was quite tasty, as it was stuffed with a paste made of tomalley, and probably lots of butter. The scallop – thinly-sliced and topped with a fudge made of seasoned butter and vegetable reductions – tasted almost like the miso paste often found in Japanese cuisine. But while these dishes were pleasant enough, the same couldn’t be said of the next one, which was easily the most unpleasant of the meal – called “Jellyfish” but actually lumpfish roe, covered with a sheet made with clarified squid broth thickened with agar and elderflower oil.  It looked pretty bad, and its taste lived up (down?) to its looks. Slimy, watery and completely bland, it was surrounded by lightly-cooked seaweed which wasn’t a whole lot better.  Frankly, I find it hard to imagine how any chef could ever serve such a poor dish to customers.

Another distinctly disappointing dish was the sea cucumber from the Faroe Islands. It’s a different species from Chinese sea cucumber, but it is still the bouncy mouthfeel that’s highly enjoyable. At Noma, though, all they used from it was the skin and gonads, dehydrated to a crisp.  Pity – a few flakes of sea cucumber in this form hardly makes what you’d call a taste experience. In fact, flavour was almost entirely absent. I couldn’t help asking myself – what was the point? Perhaps they want to prove that they can cook any kind of seafood. If so, I’m sorry to report that they failed.

But if you’re forming the impression that the meal was a total failure, let me correct that impression straight away. It wasn’t. There were several very positive things about it. There were mussels cooked in smoked butter, for example, and squid coated in seaweed butter. Both were well-received, if only because anything with butter is good, especially in the context of a meal that had such a high ‘blandness factor’. But what really impressed me was the barbequed cod’s head.  Fish head is often a disaster, usually consisting of lots of bone and relatively little meat. Here, they found a clever way to separate the jaw and cheek bones in such a way that’s very eater-friendly – you can pick the bone up at one end with a chunk of meat on the other just like eating lamb chops.  The dish was accompanied by a selection of condiments, including a paste made from (seriously!) wood ants! As for the desserts, they were OK – ‘Weird’ would be a better word. I mean, pear and roasted kelp ice cream. Who’d have thought it? Or cloudberries and pine cones.  Or sugar kelp tart. Or plankton cake. Let’s face it – you have to give full marks for imagination!

Worth a special trip?  If you’ve got a reservation, why not?

But don’t get me wrong: I had been looking forward to my Noma visit, and I did enjoy the occasion. After all, it’s such an important influence in the world of gastronomy and Chef Rene is a very humble and friendly chef. Plus, I wanted to deliver my book Fine Dining Explorer to him in person, as it features his restaurant.  I found him to be every bit as pleasant and dignified a person as when I first met him back in 2006, at the World’s 50Best ceremony, when Noma first appeared on the list (at spot 33).  Nowadays, though, there are just too many food bloggers who let the fame of a restaurant blur their judgement. Too often, they confuse the concepts of “liking the chef as a person” and “liking the food of the restaurant”. When they post on social media, using phrases like “most delicious meal”, or “world-class dishes”, or “the meal of a lifetime”, you find yourself thinking. . . “Really? How many courses in that meal were so delicious that they’d genuinely make you return?” Not, I’d guess, a lot – if any at all.

So yes, it was an excellent dining experience – but mainly for reasons that had little to do with the actual meal. And it would be very misleading if I said otherwise – it would only help to promote and propagate this kind of food trend (and Noma is not the only ‘guilty party’).  Surely we want to encourage the next generation of chefs to produce delicious and original food, rather than adapt their cooking to existing and unremarkable trends. Do I want more lumpfish roe with squid stock? Or more bland seaweed?  Or ant paste?  Or cakes that flavoured with plankton? If this is the future for fine-dine food, I’ll want no part of it.

Finally, my Noma experience didn’t end with the meal. As I’ve noted, we were treated to a post-meal tour. And what an eye-opener it was.  We learned that the place had a team of almost 100 staff, including 60+ talented young chefs. And, while listening to just how many people, and how much time, it took to produce our meals, I found myself thinking “What a waste! All that time and talent, working with the resources of a multi-million dollar establishment, yet still unable to deliver a few plates of delicious food!”  Sad times…