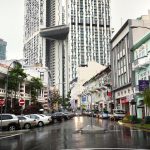 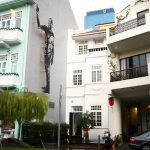 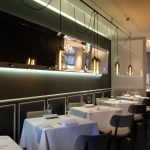 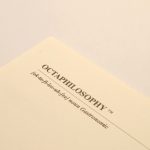 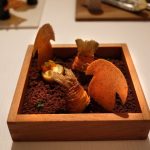 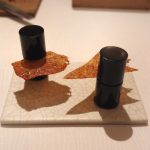 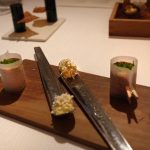 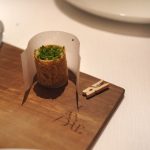 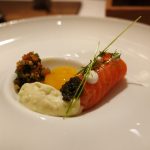 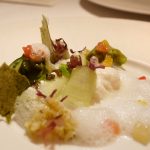 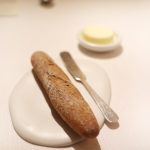 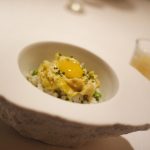 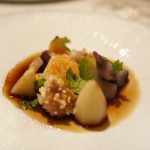 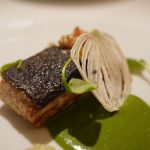 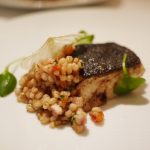 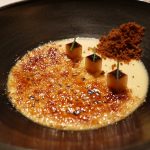 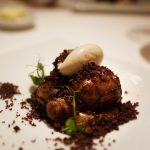 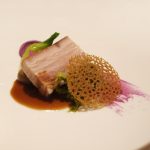 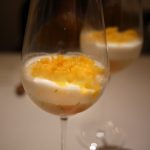 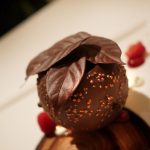 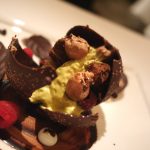 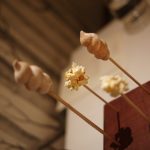 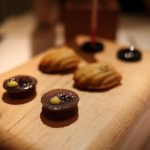 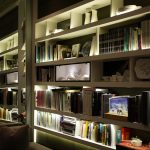 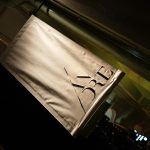 Image 1: The rim of Singapore's Chinatown doesn't seem to be an ideal spot to establish a high-end eatery but when you are as famous as André Chiang, people will find you no matter where you are. The Taiwanese chef received training from some of the top French chefs, including Gagnaire and Robuchon, before taking up the high profile Chef de Cuisine role at Jaan located at Swissôtel where he was immediately identified as a bright culinary star of the region.

Image 2: After debuting at the World's 50 Best in 2010, the name André was on the radar for many global foodies including me. Gaining a fan base at the international level, André shortly departed from the hotel dining scene to establish a more initimate cuisine expressing his own philosophy of food and art. After a year of preparation, this listed three-story house was where he decided to launch his new restaurant, André.

Image 3: We were the first to arrive for a Friday dinner service and Pam, the wife, welcomed us to their "home" and led us to our table on the second floor.

Image 4: This house wasn't spacious at all; small dining area on two floors with a narrow corridor packed with tables! Pam reiterated that she treated this place as their home and every guest as their friend. She also introduced us to the sheep shaped handbag stool next to our table. She even gave names to all her sheep stools in the restaurant. A bit too pretentious isn't it?!

Image 5: André packaged his cuisine like a philosphical journey that he called it “octaphilosophy”. Basically the 8-course menu corresponded to eight elements: pure, salt, artisan, south, texture, unique, memory and terroir. Throughout the meal, there was no explanation of how each course related to those elements. Moreover, if you booked one of the earlier tables like us, chances are you will be rushed through since they need the table for second sitting!

Image 6: What a unique place! For the first time in history, our amuse bouche arrived before our bottle of still water! Fine, at least they looked cute in a square wooden tray filled with with "soil" of garlic and chocolate. It comprised of paper-thin Wild porcini, "fish and chips", and potato Bravas. The "soil" was very addictive that I could have kept eating this all day!

Image 7: Caramelized chicken marsala held by tiny cylindrical utensils which we had to unwind in order to take the crisp out. Delicately done!

Image 8: Then served on a long wooden plaque engraved with the his name were vanilla popcorn on a long metal spoon and …

Image 9: … a Brittany blue lobster sandwich roulade revealed after removing the mini clip. I liked this interactive presentation but shame that I wasn't able to sense the lobster at all!

Image 10: Ridiculous! While we were still enjoying the amuse bouche our first course arrived! They obviously wanted to kick us out asap. Petuna ocean trout with Golden Osetra caviar and cured perfect yolk at 63°C for one day. The trout was remarkably creamy while the yolk had a distinct sticky texture from the slowcooking. Wonderful course though surprisingly the caviar was bland without enough saltiness!

Image 11: Wrapped inside a thin slice of cucumber was Gillardeau oyster together with couscous and bites of grapefruits that were blanketed by seawater foam. I didn't enjoy the composition of this course at all - sharp vinaigrette, bitter grapefruit, salty seawater. The best part was the oyster, however, its elegant flavour immediately got washed away by the cucumber. What a waste!

Image 12: The starter section of the meal was over and bread was served for the rest of the meal. Hard to believe, looking my watch, it was only 20min after we entered the restaurant!

Image 13: Charcoal grilled fresh abalone with Arborio rice and winter leek topped with a quail egg yolk. This rice dish was cooked like risotto using abalone bisque resulting in a creamy texture and an intense shellfish flavours! It was by far the best dish of the evening. It came with a shot of Iberico ham broth on the side which was unnecessary.

Image 14: A collection of wild winter roots including parsnip, okra, sweet potato, cardoons (cross artichoke parsnip), and parsley root dusted with paprika. It wasn't completely a vegetable plate as there were small pieces of sweetbread fritters and was finished in an intense veal jus. A fun mix of texture!

Image 15: Pan seared turbot with parsley sauce and fennel crisp. My turbot had a perfectly crispy skin but shockingly the skin was completely missing on my dining partner's turbot! Did André even take a look at the dish before sending them out? Or maybe our waiter ate the skin? How can this happen in a professional kitchen! Well, I guess it indicated that the kitchen team here wasn't that professional afterall!

Image 16: The turbot was accompanied with barley which sounded boring but the tiny cubes of smoked baby eel made it interesting with a good depth of flavour.

Image 17: The meal progression was a bit odd. After the main course portion of fish, they served foie gras crème brulee! Beautiful plating with gingerbread powder behind a triplet of precisely aligned caramelized pear cubes. Despite the appealing appearance and the ultra thin layer of hard caramel, the crème was not smooth at all and every bite left me with an unpleasant richness. Both of us didn't manage to finish this course.

Image 18: Grilled Jerusalem artichoke and baked potato in hazelnut butter garnished with garlic and chocolate powder, the same ones from the amuse bouche, and topped with malt vinegar ice cream. I had a hard time trying to appreciate this course, in particular the potato-chocolate combo that dominated my mouth by sugary sweetness! Maybe it could be used as a pre-dessert to provide a transition between savoury and sweet?

Image 19: So after turbot, then foie gras, and "pre-dessert", and now Iberico pork belly with savoy cabbage cream and mustard seed. Not only was the skin soft and rubbery, my piece had a fine blend of fat and meat while the one for my dining partner was just pure fat and no meat! I was very annoyed at this place, how can this kind of inconsistency exist for the same course at the same table!

Image 20: Onto the actual pre-dessert. Layered in a wine glass was white wine gel at the bottom followed by a whole confit kumquat, yuzu foam, and mandarin granita. A good variety of texture with a deep fruitiness from kamquat. They continued to march ahead serving us the first dessert without considering the fact that we were still enjoying the pre-dessert!

Image 21: Though I wasn't pleased at the meal so far, I finally sensed André's ingenuity. This very original Japanese influenced dessert of edamame custard covered with an airy miso cream and finished with a brioche stick and a cute branch of popped rice. Other than the broiche stick on top was soft and salty, the flavour combination was very satisfying. Unfortunately, they distracted us from this wonderful custard by serving the next dessert!

Image 22: The last course of the meal was a huge sharing dessert of chocolate degustation. It was a spectacular artwork of chocolate sphere decorated by three pieces of handcrafted chocolate leaves. Neither of us wanted to destroy this masterpiece but we couldn't wait any longer as the robotic service staff might kick us out anytime.

Image 23: Enclosed inside the sphere were choux pastry, ganache, and matcha ice cream. Before I could even taste the matcha ice cream, they already brough us the set of petits fours! They really wanted us out. Best of all, they were too quick for themselves that they forgot to bring out our cutleries and we basically had to top up water ourselves for the second half of the meal.

Image 26: While I ignored the petits fours in order to enjoy my chocolate dessert, Pam appeared and said she wanted to show us the reading area upstairs. André also came up to have a quick chat before Pam led us to the ground floor with a bill without a chance to go back to the table. Even though I haven't even had a chance to touch the petits fours, at that point, I didn't bother anymore.

Image 27: This meal was an excellent example of poor hospitality and badly managed kitchen. Not only didn't I get André's Octophilosophy, contrary to Pam's various attempt, by fitting a 3-hour tasting menu into a 2-hour slot, they are running this shop as a commercialised eatery rather than their home! Disappointing, very disappointing! An expensive experience of a pretentious cuisine in an unpretentious neighbourhood!