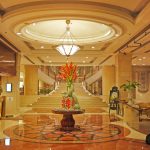 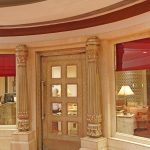 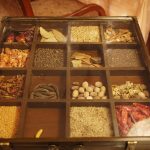 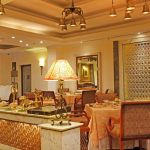 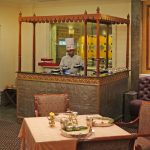 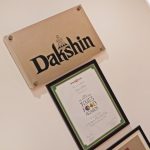 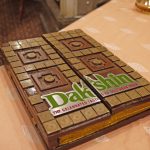 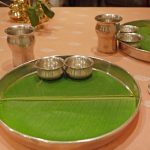 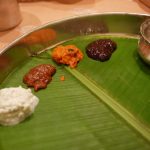 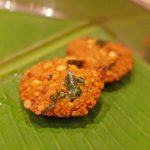 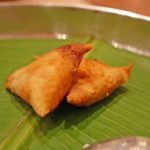 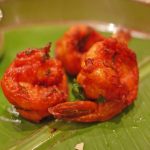 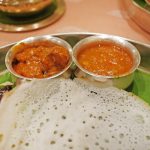 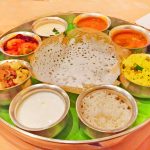 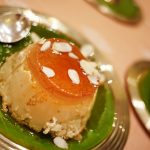 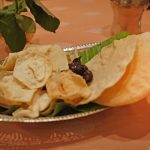 Image 1: Phew! We thought we’d never get here, but we finally made it to the ITC Sheraton in New Delhi after the usual horrendous traffic jam. We’re here to dine at the hotel’s famous restaurant, Dakshin (which means ‘South’), which has been open for 30 years now, and is considered by many locals to be a culinary gem, specialising in classic dishes from the four southern states of India.

Image 2: Located on the first floor of the hotel, the restaurant’s setting is inspired by temples in the South of India. When you go to an Indian restaurant outside of India, you’re very likely to be given a menu based on the cuisine of Northern India, which is rich in ingredients such as tomatoes, garlic, onion, and yogurt. After a week in Delhi, I realised that the same is true for most restaurants actually in India, too. So it was good to experience, for once, a different style of Indian cuisine.

Image 3: The service was very friendly and, while we were waiting, we were shown the various types of spice they use here, and how ingredients such as coconut, fruits and actual curry leaves are popular in Southern cuisine.

Image 4: It was a week night, and the restaurant wasn’t too busy – a little over half full, perhaps. But if you want a reservation for Saturday or Sunday, you’d do well to book in advance.

Image 5: They make various small starters in this kitchen counter in the dining room.

Image 7: Love the table setting! Our waiter also explained that the food will be served on banana leaves, and suggested that we eat with our hands. Great - something different!

Image 8: And the menu is pretty cool, too! Made of heavy, solid wood, it opened like the door of a temple. However, since I was here with my local friend, I didn’t worry about choosing dishes from it – I simply let him take charge of the food order. He suggested a few items from the a-la-carte, along with a thali - which is a round platter consisting of small dishes.

Image 9: A tray of poppadoms arrived, together with four different condiments – tamarind, tomato, ginger and coconut.

Image 10: Then, various snacks to begin. This is Paruppu Vadai - lentil patties, in other words. They’re crunchy on the outside and soft inside.

Image 11: These were followed by Vegetarian samosa - crunchy triangular pastries filled with spiced potato and vegetables. They were delicious, though slightly more spicy than I had expected. Well, when you’re in India, I guess you have to get used to the ‘spiciness level’.

Image 12: Here, we have Royyala Vepudu - prawns tossed with browned onions, tomatoes, ginger, garlic and ground spices. Seafood often gets overcooked in an Indian restaurant, but it wasn’t the case here – still nice and moist.

Image 13: The dish came with a large piece of Appam, which is a lacey pancake of fermented rice batter and coconut milk, and Kori Gassi - a typical Mangalorean mixture of chicken with bedgi chillies and coconut. There was also Tomato Pappu, which is lentils cooked with tomatoes, onions and chillies, and edged with garlic and mustard. The pancake was interesting - crispy on one side and fluffy on the other. It went extremely well with the chicken and coconut.

Image 14: Now the thali. This is like a set meal, and came with an Appam surrounded by rice, potato, vegetable, dal and two choices from the menu. We chose Meen Moilee (fish simmered in coconut milk and green chillies), and Pachakari stew (vegetables in a curry of coconut and cumin). The fish was beautifully cooked, and delivered a burst of coconut sweetness with every bite. Wonderful!

Image 15: After all this, we were completely full, so we had just a small dessert to share. And yes - more coconut, this time in the form of Vattil Appam - steamed coconut custard, sweetened with jaggery and cardamom. The custard was nice and silky without being overly sweet. An excellent finish to our meal!

Image 16: It was a meal full of flavours, that’s for sure! Mostly, the dishes were only Medium on the spiciness scale, but one or two were just too hot for me. Service? It was pretty good throughout, and the staff were very patient with my requests for explanations of each dish. And here’s a bonus – the cost was about half that of restaurants in other, even more exclusive, 5-star hotels in the area! Overall, I’d recommend it strongly, especially if you’re a little tired of the standard Northern Indian cuisine.