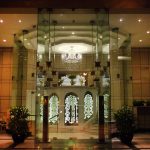 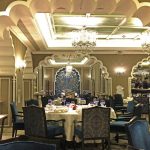 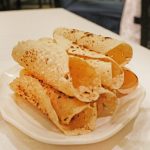 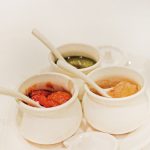 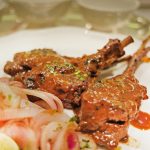 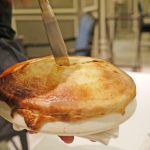 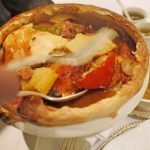 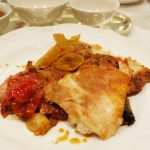 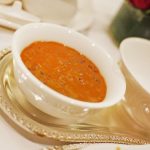 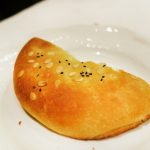 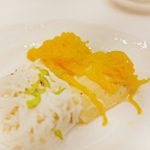 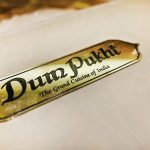 Image 1: Here I am, back at the ITC Maurya after yesterday’s lunch at Bukhara. This time it's dinner at the other fine dining establishment in the prestigious hotel. There’s a separate entrance in the hotel’s rear parking area – a marbled spiral staircase leads directly from the basement to the entrance of the restaurant.

Image 2: The exquisite blue and silver décor is the perfect match for the 18th century Grand Cuisine of India, which has its origins in ancient Dum cooking – hence, obviously, the name of the restaurant. Dum actually means to 'breathe in' and pukht means to 'cook'. It’s a technique in which food is tightly sealed in a pot and cooked over a low heat. The impressively thick and heavy menu is rich with historical background in each section, so a visit here is educational as well as gastronomically exciting.

Image 3: I was warmly greeted by the staff, then – as with almost every meal I’ve had in India – I was served with poppadoms and…

Image 5: There’s no tasting menu here, so it wasn’t easy to try a wide range of things, as each dish was a big portion for sharing. I decided to simply go with their suggestion. For a starter, I had Habibia Chops - Lamb chops marinated with black cumin, black pepper, figs and malt vinegar then cooked on grill finished on Dum. And it was excellent. The meat was tender enough to separate easily from the bone, and the sauce was a well-judged mix of garlic, light spices and fruitiness. It reminded me of the Chinese dish Pork Rib in Mandarin Sauce (京都排骨), but with lamb instead. Tasty!

Image 8: …To reveal the chicken inside, slow-cooked with pineapple and peppers, both red and green. The pastry had a hint of sweetness that combined nicely with the sauce. A very good course, for sure, though it didn’t really have that Wow factor.

Image 9: This side dish is Massh Qaliya - green dal, slow-cooked with spinach, ginger and chillies, topped with white cumin and onion. Very creamy but without the smokiness of the Bukhara dal.

Image 10: The bread here is Taftan Dum Pukht, a signature recipe. it’s thin and crumbly, and made with a unique mix of puff pastry and flour, then topped with melon seeds and baked in an iron tandoor.

Image 11: Since, basically, I’d had a meal for two, I wanted a light and simple dessert. So I opted for Falooda – a traditional cold dessert, made by combining Indian ice cream and vermicelli. On this occasion, there were were two ice cream flavours - saffron and pistachio. Now, I’ve had Falooda before, from street vendors, so I’m okay with the slightly weird combination of noodles and ice cream – I rather like it. However, the quality of the ice cream was simply terrible – more like an icy sorbet. Plus, the noodles had been soaked in some kind of artificially-scented rose water. It didn’t work at all! A very poor end to my my meal.

Image 12: Well, what can I say? First, it's not the ideal place for solo diner, as there are no small portions you can order, which rather limited my experience of the place. However, I loved the informative menu with its detailed historical background of Dum cooking - it made a fascinating reading. But the food itself was just the opposite – it wasn’t in the least bit fascinating. The flavour profile was just too ‘samey’ – far too reminiscent of almost every other curry I’d had during my few weeks in India. I have to say, though, that both the service and the setting were superb – it’s just a pity that the food itself was so ordinary.