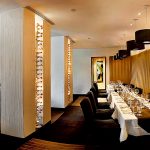 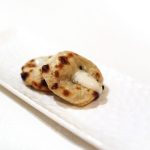 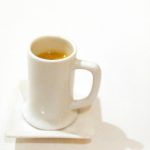 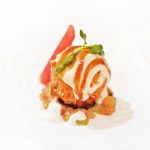 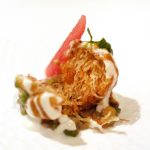 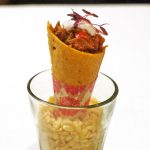 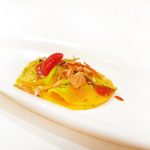 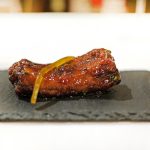 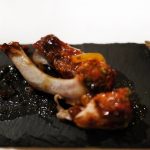 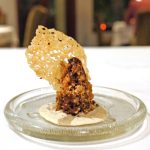 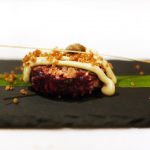 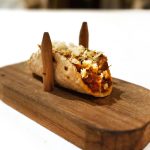 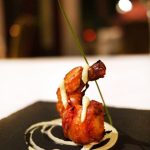 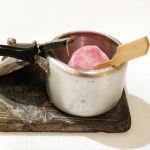 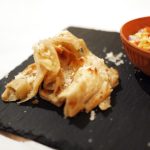 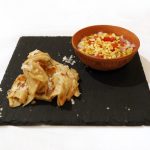 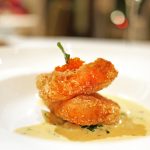 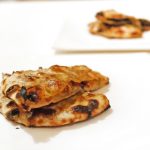 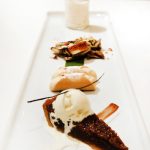 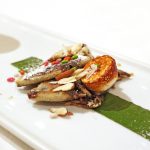 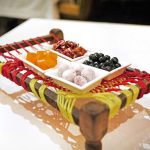 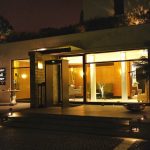 Image 1: Over the last decade or so, every culture seems to have produced a ground-breaking chef whose mission is to modernise traditional cuisine. For example, there’s Gastón Acurio (Peruvian), Alex Atala (Brazilian), Alvin Leung (Chinese) and if you wanted to pick a name for Indian, it would have to be Chef Manish Mehrotra and which is why I was here in New Delhi. After an hour and a half of the city’s usual traffic chaos, I finally arrived at The Manor, a modern luxury boutique hotel, located in the lush area of Friends Colony, where I was to experience Chef Manish’s innovations.

Image 2: The restaurant is located on the ground floor, past the main reception area and along a corridor.

Image 3: Though the restaurant wasn't huge, it was elegant and beautifully lit as well as a small bar, a main dining area with individual tables, and a semi-private area for larger groups.

Image 4: Once I got settled, the manager explained to me in fluent English the concept behind the cuisine. Every dish on the menu is based on a traditional Indian dish, but modernised - either using contemporary techniques or by incorporating foreign ingredients. That’s why, explained the manager, I’d find that every course has a strong “Indian Accent”. Suddenly, the reason for the name of the restaurant became clear. Very clever! There was a choice of vegetarian and non-vegetarian tasting menus, consisting of 7 - 10 tasting portion courses.

Image 5: The first item illustrated the ‘accent’ idea perfectly - a piece of blue cheese naan with coconut, accompanied by a glass of Moët & Chandon. I had many naan bread throughout my India trip, mostly plain or with a brush of butter. This one, though, was different... warm fluffy bread with melting cheese. Traditional Indian with a wonderful western touch!

Image 6: This tall, slim cup of sweet corn velouté was sweet, creamy and lightly spiced. Just enough to whet my appetite for the delights ahead!

Image 7: And the first of these delights was a potato sphere chaat. Chaat is a typically savoury snack often sold by street vendors. The traditional version is a mixture of potato, fried bread, chickpea, and spices, topped with coriander and yogurt dipping. Chef Manish’s version, unsurprisingly, was much more complex...

Image 8: ...the entire ball was crispy, consisting mainly of fine strands of chaat, and somehow managing to be crunchy and airy at the same time providing a very unique mouthfeel. There was also a chutney, made from tamarind, mint, and coriander, with a piece of sweet watermelon offering a refreshing, sweet finish. Wow! With such an impressive mixture of taste and texture, I wouldn't mind a few of this type of snack every day!

Image 9: More treats... this time, a Duck khurchan cornetto. Topped with golden garlic raita (yogurt), it was rather neatly presented in a cone made from flour and sundried tomato. As khurchan means ‘to scrape’, basically, the duck meat was first slow-cooked, then hand-pulled before being 'scraped' in with a semi-dry chilli chutney. The rich flavour from the warm and succulent duck complemented by aromatic spices... Superb!

Image 10: And now another brilliant illustration of the chef's creativity in merging east and west! Khandvi is traditionally a savoury snack - a yellow wrap made with chickpea flour, then tightly rolled into bite-sized pieces. Here, it was cleverly transformed to an Italian ravioli, with the cheese inside garnished with tomato and pinenuts. An Indian version of pasta! Conceptually great, and an even better taste!

Image 11: A very informative meal that I was learning something with every course! We all know mango is the most abundant fruit in India which is why it’s such a popular ingredient in Indian cooking, turning up in everything from chutney to lassi. And one of the more popular sundried mango pickles is meetha achar. Here, the chef took advantage of the blend of contrasting tastes to create his own version of sweet & sour spare ribs, with toasted kalonji seeds. This you have to see...!

Image 12: ...the spare rib was slow-cooked in mango marmalade and spice for hours - so long, in fact, that the ultra-tender meat simply fell off the bone with a gentle push! Very enjoyable texture along with the extra depth of flavour from mango over the usual sweet & sour rib dishes that I have had before. Simply fabulous!

Image 13: Next up was the Kashmiri morel musallam. Musallam literally means ‘whole’, so – here – it meant a whole morel. A mixture of mushrooms - oyster, button, ceps - is finely chopped and cooked in garam masala, a blend of spices common in Northern India, before being stuffed in a whole morel and decorated with a parmesan papad (mini rice crisp) and sprinkled with crushed roast walnut. Lots of good flavours, such as garlic, ginger and coriander – as well as a slight warmth from chilli.

Image 14: Now, the manager arrived with a new-ish dish on the menu - and the first dish that proved a little disappointing. It was beetroot and peanut butter tikki, ‘a small spiced snack’. Beetroot and peanut was first blended with spices, then shaped into a patty and grilled on both sides. The result had a strange, rather mushy texture, difficult to like, while the wasabi quinoa garnish on top was odd and the wasabi yogurt was very salty. Nice idea to bring in Japanese ingredient, but sorry, Chef Manish – but it didn't work for me!

Image 15: Phulka is a common small chapati bread. Here, it was used like a taco - Pulled pork phulka taco, with crispy potato on top! With soft meat and a creamy sauce, this was the spiciest item on the menu - but so tasty that I ate every bit.

Image 16: One last small treat before the main dish - Prawns wrapped in a thin slice of bacon before being cooked in tandoori and dressed in wasabi malai, a sauce which made from slow-heating whole milk. I rarely like my seafood cook in dry heat, and this was no exception. Even with the bacon, I still found the prawn too dry for my preference.

Image 17: It’s always good to have a palate cleanser after savouring a wide range of flavours. On this occasion, it was a sorbet, before the main course. The manager explained that, in India, every kitchen has a pressure cooker, and this Pomegranate & churan kulfi sorbet was served in a mini pressure cooker! A thoughtful way of highlighting local culture by incorporating it into the tableware.

Image 18: The pre-main course was Jodhpuri chur chur paratha, a popular Delhi dish of layered bread. I loved the flaky layers - and I particularly enjoyed the fact that it wasn't even slightly greasy.

Image 19: It came with dal Moradabadi, topped up with tamarind tomato coriander, a very popular yellow lentil dish, from the North Indian city of Moradabad.

Image 20: And now to the actual main course, called john dory moilee - traditionally a Southern-Indian fish stew in coconut curry, but here a crispy version. It was John Dory breaded in rice flour, then lightly deep-fried and topped with tobiko, yes, another Japanese touch. The sauce was an addictive mix of delicious flavours ... coconut milk, ginger, onion, mustard seed. Crispy on the outside and moist inside, it was sitting in a small pool of rich creamy sauce... delicious, to say the least!

Image 21: It came with kulcha on the side, a typical leavened bread in Punjab region. Here, though, the chef had enhanced the simple traditional version with applewood smoked bacon, yielding a great balance of beautiful sweetness and the bacon savouriness. Along with the seductive smoky aroma… wow!

Image 22: And they asked me if I would like to try the wild mushroom version of kulcha that had a drizzle of truffle oil on top. Silly question! I mean, who could say no to a dish with such an attractive smell of truffle! I couldn't believe I managed to eat more though!

Image 23: The waiter described this selection of desserts as "grandma inspired". From the far end, they were: Haji Ali-inspired apple custard, cheeni ki roti with toasted marshmallow, Misti Dohi cannoli, and a warm doda burfi treacle tart with vanilla ice cream. The apple custard was standard; the sweet yogurt cannoli was a nice fusion of Indian and Italian; the Doda burfi, a festive Punjabi sweet like a fudge, combined with the British classic treacle tart, was very creative. But the best item on the plate was...

Image 24: … the sweet roti, a warm sugar bread. It was quite simply a delight. With a texture in between shortbread and cookie, it had jaggery filling and was sprinkled with toasted almond. But it was the melting marshmallow which providing the very moreish sticky, sugary texture. Very nostalgic! Unbelievably, though the portion was for two to share, I finished all by myself.

Image 25: Last but not least, various examples of the chef's childhood sweets to accompany my tea. This was another cultural touch as it was served on a mini charpai, a traditional bed made from wood and knotted ropes. Among the tastes on offer were preserved mango cubes, salted dried tamarind and candied nuts with rose petal. The waiter warned me that I might not like the black balls, Hajmola, as they were an acquired taste – and he was right! They were made from a mix of cumin powder, mango and pomegranate. Not, for me, the ideal final taste, but it was all part of the cultural food experience!

Image 26: Conclusion? Chef Manish is surely reinventing Delhi's fine dining scene through the unique amalgamation of traditional and modern tastes. The service was both friendly and informative, with excellent explanations of the background to each dish. In all, a most satisfying meal and I would love to come back for a revisit in a few years time. As a bonus, the traffic had eased up by the time I left. Unfortunately, since it was a Friday night, it still took an hour to get back to the hotel.