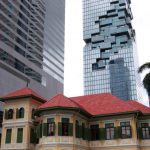 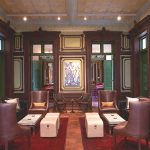 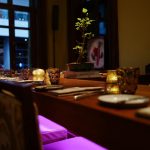 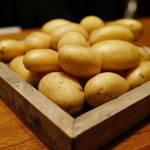 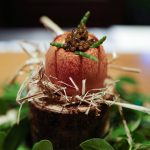 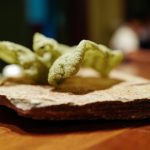 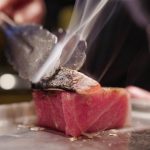 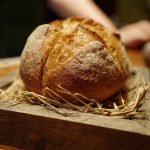 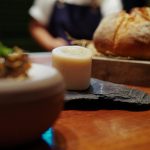 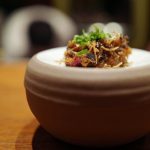 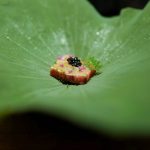 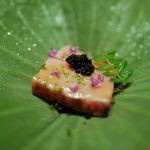 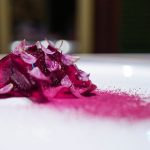 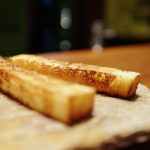 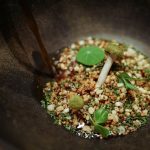 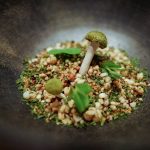 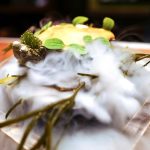 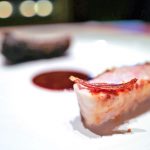 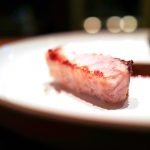 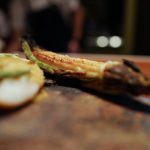 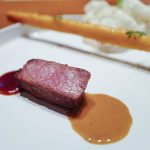 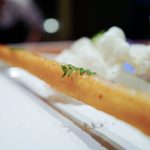 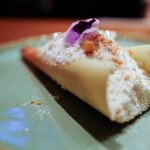 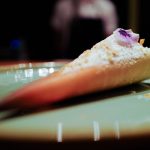 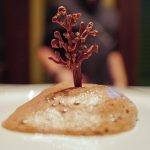 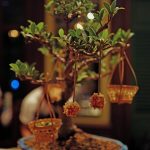 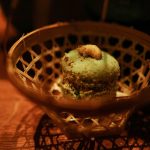 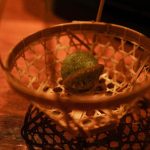 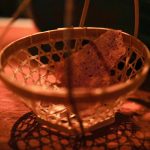 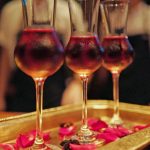 Image 1: From the outside, the old house that sits smack in the centre of Bangkok’s business district, Sathorn, looks just like an ordinary museum. There’s little sign that it houses something that’s known to serious foodies in Bangkok as a feast to the eyes and the palate. That’s why I decided to take up chef Fatih’s invitation to visit – it was a bonus that the place was just a stone’s throw away from where I was staying. The House also hosted Asia’s 50 Best and a welcome dinner for the Michelin’s Guide.

Image 2: After a look around, I found myself talking to chef Faith and looking at some of the things displayed on the counter. It didn’t take long to learn that he’s worked across the world (including Turkey, China, Japan, Singapore - and even a stint at Noma in Denmark) and it was reasonable to expect that this experience would be reflected in the meal tonight. Naturally, I decided to have the full tasting menu with 10 courses.

Image 3: The dining room has a counter and a table section, in a setting that exuded a sense of old-world luxury, but with a modern twist.

Image 4: Now the first course arrived. . . a pile of potatoes. But, subtly disguised among the real potatoes, were two fake bloody mary potatoes. I popped a piece into my mouth, and BAM! – the flavour of potato vodka exploded onto my taste buds. It was a fun start!

Image 5: The menu’s description of this dish read Is the Chicken Thief a Fisherman!. Interesting! So I armed myself with a small spoon and started digging from top to bottom. As I dug, I revealed layer after layer - Schrencki caviar, tiny broccoli, karmesbeshiya-aged soy, uni, corn. . . and, finally, a raw organic egg yolk at the bottom. The ingredients complemented each other quite well, with smooth and crunchy textures making a nice contrast. The karmesbeshiya-aged soy cream was light enough, and didn’t overpower the uni in the slightest. I concluded that the thief was not being naughty after all!

Image 6: The dish was accompanied by seaweed crackers.

Image 7: Now the chef arrived to show us what he had waiting for us - an Aburi of medium fat tuna. Aburi is a process whereby the fish is partially grilled on top, leaving the rest raw – here we see the chef using charcoal as a grill, which resulted in a dish with a nice aroma.

Image 8: While waiting for the fish, a sourdough bread arrived, along with some umami butter and truffle XO sauce. As I was beginning to feel some real pangs of hunger, it was very welcome! So I…

Image 9: …immediately scooped out some of the butter, which took its umami from bone marrow. And wow! The butter had such a depth of taste I got a bit carried away – the chef had to actually tell me to stop eating it. Impressive!

Image 10: Black truffles and XO sauce. The taste of the sauce was so dominant, I could hardly taste the black truffles.

Image 11: And voila! The Early Morning at Tsukiji Market arrived on a lotus leaf!

Image 12: The tuna I’d been shown earlier was topped by black truffle caviar. The yuzu miso and avocado cream hidden at the bottom gave a subtle, nutty touch to the smoky aftertaste of the fish. I found this a lovely course, and the chef told me it was quite a nostalgic one for him as, when he was living in Japan, he never left Tsukiji market without having a piece of sashimi. It’s also worth mentioning chef Fatih’s attention to detail - even the lotus leaf had droplets of water on them. Beautiful!

Image 13: I was still almost full from the bread earlier, but this next course Red Parfait made me hungry again. It consisted of a layer of beetroot on a cylinder of foie gras, accompanied by red tapioca. I cut through the beetroot to get to the foie, then tasted the two together. The sweet and tangy beetroot went very well with the smooth foie. I repeated the exercise with the brioche (next photo). And suddenly I was in Heaven! My only small complaint was that the beetroot was a bit too firm, making it difficult to cut and savour together with the foie. All the same, this was still my favourite course of the night.

Image 14: Brioche for the Red Parfait.

Image 15: And now a nice contrast of texture and temperature to the previous course - Porridge in the Forest. The dish looked rather like mushrooms lying on the earth, which, in this case, was made of popped red and white quinoa. The soup was made from 7 types of mushroom, and the flavour was so intense I simply had to sacrifice my dignity and slurp every last drop from the plate.

Image 16: The soup was absolutely flawless, with the superb interplay of crunchy texture from the grain contrasting wonderfully with the softness of the mushrooms and the earthy, liquid finish of the stock. So far, I was impressed! But I still had some trouble defining chef Fatih’s cooking style and cuisine, as they seemed to be a mishmash of everything. Then he showed me this VIDEO, which made me realize… It’s Fatih’s Cuisine!

Image 17: Next up was What is Umami?. This was oyster, pan-fried with butter and resting on a thin layer of chorizo, seaweed and cucumber salad. The sauce on top was umami béarnaise, decorated with umibudo 海ぶどう (Japanese sea grapes). The oyster itself was quite big and meaty, so the béarnaise was quite a good way to balance the flavours.

Image 18: The next step on our march towards the main course was a mark of chef Fatih’s memory of his time in Jakarta, Indonesia. He was inspired by the cuisine there, so after his return, he created this dish called 5 Days in Jakarta, which is really or his own version of Ikan Bakar (Balinese grilled red snapper).

Image 19: Chef Fatih made the original dish more elegant by sprinkling sambal powder on the grilled fish, while, sitting on the edge, was Ikan Bilis (a small anchovy). The red circle is ketchup-mayonnaise sauce with lime oil, and the black fluffy bit on the other end was eggplant tempura with its own skin replacing the flour. The idea was impressive, though I’d have preferred the texture of the fish to be slightly undercooked.

Image 20: The next course really showcased the top-notch ingredients sourced by chef Faith. Again, it was based on his memories, but memories that went back even further. Five years ago, he had a holiday in Phuket (an island to the south of Thailand) and tasted the Phuket lobster with yellow curry. Now, five years on, here I was eating Andaman BBQ, which was an elegant twist on the dish that used a French technique.

Image 21: Basically, it was young Phuket lobster covered with yellow curry bisque, and a chargrilled young corn from Chiang Mai (a place in the North of Thailand known for quality produce) on the side. Although I found the lobster itself mediocre, the yellow curry bisque lent the overall flavour an exotic, sweet, tangy and spicy finish. The bisque also allowed the flavour of the corn to shine through. Superb! It was definitely my second-favourite course of the night.

Image 22: The name says it all – Steak and Chips was the main course. Blackmore Wagyu short ribs from Australia, flanked by a tendon sauce (dark colour) and an onion-shoyu sauce (light colour).

Image 23: Resting on the plate on the other side were long pommes and tendon chips. The beef seemed to me to be quite ordinary – I was surprised by the dry texture. I liked the sauce, though. And that marked the end of my savoury journey - I was looking forward to the desserts!

Image 24: On My Way Home to Silom This exotic, yet exquisite-looking, dessert resulted from the chef’s experience of walking to his home in Silom where he used to buy a Thai banana snack from a 70-year old woman. Of course, he added a twist or two to make it his own and - needless to say - better.

Image 25: For example, he used a banana like the original, but chargrilled it in its own skin to caramelise it. He then sprinkled some banana snow on it – an idea inspired by his feeling that Bangkok could use a little snow to cool the place down! The result was a simply marvellous dessert, featuring a perfect marriage between toffee and caramelised banana flavours, while the delicate snow added a nice temperature contrast. Quite an innovative and delicious twist to the original version!

Image 26: The second dessert was Everybody Loves Chocolate. The chocolate foam hid a little surprise - green tea mousse. The pretty mini tree protruding from the foam was made of delicious chocolate. It was a creative presentation, but also a dark and heavy finish to my dinner. I left with the tree strong in my memory!

Image 27: Another miniature tree – this time with petit fours hanging from it. This looked quite similar to the olive tree of Roca, but had slightly more ‘fruits’ to choose from.

Image 28: A Baklava to reflect the chef’s Turkish origin. It turned out to be pistachio macarons with clotted cream.

Image 31: To end the night, chef Faith insisted that I try a specially-aged Negroni, which he had made himself in the garden behind the House! To do so, he’d had to convince the hotel management to dig holes in the garden, in order to bury his amphora. It was worth it, though, as the result was – predictably - stunning. The distinctive taste of the aged Negroni, along with the personal story behind it, meant that I left wanting more. To sum up, Chef Fatih is one of Bangkok’s rising culinary stars: his unique creations, attention to detail, and fascinating stories make House on Sathorn a must-visit restaurant if you’re ever around Bangkok.