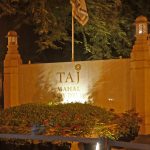 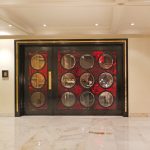 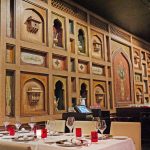 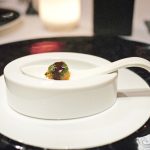 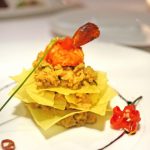 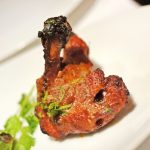 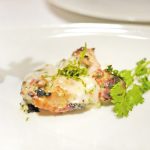 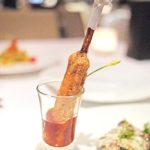 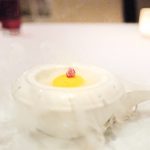 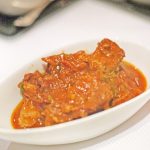 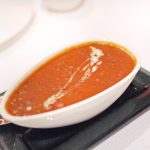 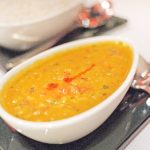 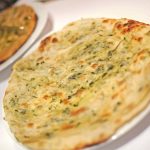 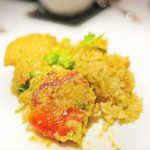 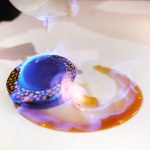 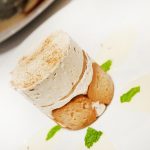 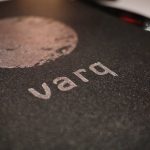 Image 1: You don’t have to be in India long before you realise that truly high-end dining can be found only in a 5-star hotel. So, one evening, a local friend and I decided to treat ourselves to dinner at the Taj Mahal in New Delhi. As the Taj Group of hotels is the largest luxury hotel label in the country, our expectations were high.

Image 2: The restaurant was down a floor from the lobby, and the entrance was… well, how to describe it? Stylish and modern, perhaps? It was certainly different! And then…

Image 3: Wow! What a contrast! The interior was the very opposite of modern (though still stylish!), with walls decorated like a temple. The manager told me that ‘Varq’ actually means ultra-thin sheets of edible gold or silver, typically used as a garnish. Interesting! I guess that, basically, it signals that we’re eating luxury food.

Image 4: We were welcomed by a tiny chaat, served on a large, trendily-designed spoon. This crispy lentil dumpling had been topped with mint and mango sauce. As the restaurant has no tasting menu, it wasn’t easy for two of us to sample too many items from the menu, so we decided to go with the waiter's suggestion of trying various of the restaurant’s signature dishes.

Image 5: First up was Varqui crab - Layers of crabmeat on crisp filo pastry, topped with a jumbo tandoori shrimp. There was a generous amount of crab in a flavourful creamy sauce. Very promising start!

Image 6: Now another appetiser, a ‘three-piece’ dish called Chicken 3-way. One of these was a piece of tender chicken, served bhatti ka style – that is, marinated in a mixture of garlin, ginger, red chilli, malt vinegar and garam masala, before being put in the tandoor. In the middle of the 3 pieces was...

Image 8: ... ganderi kebab - deep fried chicken served on a skewer. It was only as I took my last bite of this tasty dish that my wine finally arrived, after several reminders to the waiter. A little frustrating, but not the end of the world. On with the meal...

Image 9: To refresh our palates before the main course, and to add a striking visual element to the table, a mango tamarind sorbet was served on tea pot-shaped tableware on a bed of dry ice. I suppose it was a little gimmicky, but – that aside - the combination of mango and tamarind was actually very pleasing to the taste buds.

Image 10: We’re in a food-sharing culture, so our main course was split into individual small portions. This is lamb cooked in Martabaan, an earthen cooking pot, often used to cook meat with pickled chillies.

Image 11: The waiter told us that this Lal Moth Ki Maharani is the chef's special red lentil dish. Unfortunately, he didn’t get around to explaining why it’s special - I found it rather too spicy.

Image 12: After the aggressive spiciness of the previous dish, I was glad when a milder dal arrived. Called dal Methi, it was tempered yellow and red lentil, tinged with fenugreek leaves.

Image 13: We ordered two types of naan. One was Fenugreek - crusted flaky flour bread - which I loved. The other, Jalapeno peppers, was crusted whole wheat bread - too spicy for my taste.

Image 14: Then came the best dish of the evening by far - Bengali style prawns. Cooked with smoked chilli and mustard curry on a bed of coriander rice, it didn’t look particularly attractive, but looks can be deceptive! Creamy without being greasy, highly flavoured without being too spicy. A nice aftertaste to prepare us for the desserts.

Image 15: As we were going with the restaurant’s signature dishes, the waiter served us with the most popular desserts of the establishment restaurant – neither of them traditional Indian. First came the Dome, consisting of a chocolate shell and Bailey’s ice cream served flambé style, with the flaming liqueur poured on top. OK, so it’s a bit old-fashioned - but it's always fun to see some fire on the table!

Image 16: Finally, a fusion dessert of Tiramisu made with mascarpone and rasgulla - ball-shaped dumplings of chena and semolina dough soaked in sugar. A good idea, but as there was no coffee flavour at all, I don’t really think it deserved the title tiramisu!

Image 17: In conclusion, this was probably the most disappointing meal of the trip. US$150 is a lot to pay for a very mediocre dinner for two with a glass of wine each. Also, for this standard of hotel, the service was quite poor. This would have been a little more understandable if it had been a busy night, but the dining room was only half full. I had to ask three times for my glass of wine and twice for the dessert menu – and the main course arrived without cutlery! So...not a disaster, but there are much better places for this kind of money!