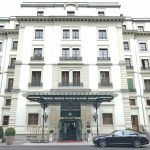 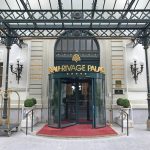 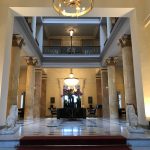 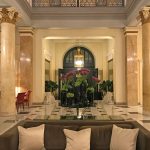 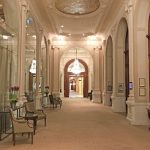 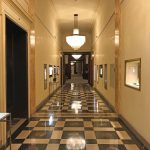 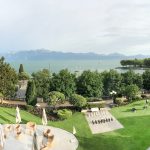 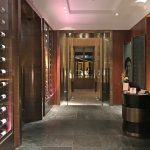 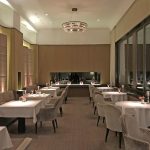 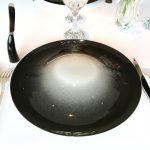 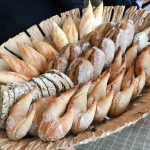 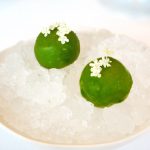 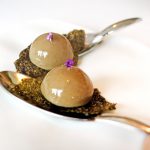 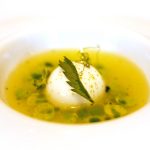 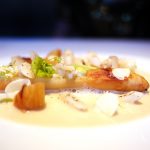 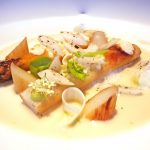 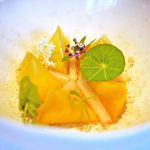 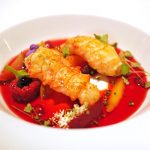 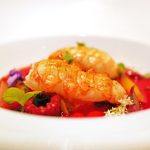 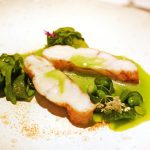 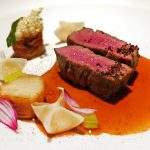 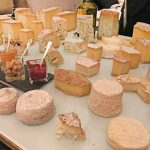 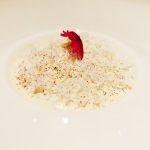 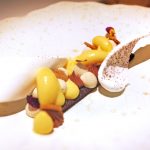 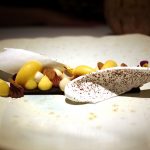 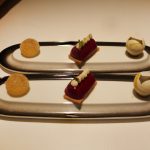 Sister restaurant of a Michelin 3-star chef in a famous hotel.

There aren’t many Michelin 3-star female chefs in the world. But Anne-Sophie Pic is one of them. I’d already visited her flagship establishment in Valence, some years ago, and now I’d got the chance to visit her place in Switzerland. I won’t hide the fact that I was excited by the prospect!

The restaurant turned out to be situated on the ground floor of one of the most historically famous hotels in Switzerland – the Beau Rivage Palace, where the Treaty of Lausanne treaty was signed in 1923. The hotel is beautifully positioned on the banks of Lake Geneva, directly across from the French city of Evian (the source of the famous water, which we visited the next day), and our lake-side room (which was worth every penny of the the small surcharge) had a balcony which was perfect for enjoying the view. With its spectacularly luxurious interior, it was obvious why, over the years, the place had played host to many important people, from Victor Hugo to Nelson Mandela.

The restaurant is on the ground floor of the hotel, and caters for up to 50 customers per night. To do this, the establishment employs a team of 13 in the kitchen and 15 front of house. The long, narrow dining room was pleasant enough, I guess, though its colour scheme and layout made me feel like I was in a company meeting. It was an ambience which was emphasised by the clientele – I’d say that about half of the guests that night were there on business. Still, I wasn’t concerned – it was the food that I was there for, not the look of the dining room or the nature of the other diners.

A meal full of imaginative combinations with a Japanese touch.

Actually, we’d arrived a little late for our reservation, as the drive back from our day trip to the Swiss village of Gruyere (famous for its cheese) took longer than expected. So we wasted no time in ordering the tasting menu and requesting the bread basket to kick things off without further delay. When it arrived – the bread, that is – we were faced with an interesting selection: as well as the usual plain white baguette, there were breads with a beverage theme – Japanese green tea, coffee, or beer bread. A rather fun idea, I thought.

As to the meal itself, the tasting menu isn’t extensive, as the emphasis is very much on quality rather than quantity. First up was a refreshing amuse bouche of chilled verbena and geranium broth, together with a yoghurt-filled ball which burst in the mouth. The remainder of the meal consisted of classics of the region, with some imaginative combinations. For example, a traditional ravioli course of Berlingots stuffed with Gruyere was served in an innovative hazelnut and mushroom broth – I couldn’t get enough of the finely made pasta with warm melting cheese in the centre, and the nutty earthiness of the broth. Then there was white asparagus and razor clam (never seen this veggie-seafood combination before) served in a liquorice and soba cha (Japanese roasted buckwheat tea) broth. A brilliant textural contrast! In fact, this Japanese undertone continued throughout the meal, with dishes such as Scottish langoustine served in a cinnamon and kumbo (Japanese kelp) broth with beetroot and raspberry. The seafood was precisely cooked with a touch of rawness in the centre, and I particularly enjoyed the umami which had a touch of fruitiness from the broth.

The two main courses were turbot from Brittany, served with green pea purée, and beef from Val d’Hérens served with Phú Quốc pepper and celeriac. It would be an exaggeration to claim that either course was exciting, exactly, but both were excellently done and very enjoyable. Before the dessert arrived, we were presented with a large cheese trolley bearing a wide variety of local and imported (from France) cheeses. The meal finished with a pre-dessert of coconut and strawberry, followed by passionfruit with chocolate and coffee dessert. Usually, fruity chocolate desserts tend to scare me a little, as it’s a mystery to me why anyone would ever put sweet and rich chocolate on the same plate as acidic and juicy fruit. On this occasion, the passion fruit sorbet and mousse were both sweet rather than fruity, resulting in a much more palatable dessert than I expected.

This is a place to indulge yourself.

Let’s face it: Switzerland is an expensive country – for pretty much everything, and fine dining in particular. In fact, the fine dining prices are on a par with Paris. On this evening, I wouldn’t say the meal was of great value, but reasonably priced given its location. The meal was excellent, in that every course was carefully executed, and I was glad to see that Anne Sophie isn’t afraid of experimenting with new combinations and the use of Japanese ingredients. Also, her style of food is much lighter than many French haute cuisines, as she loves to use light broths rather than classic buttery and rich sauces. The service was smooth and attentive, and the manager engaged in conversation with various tables, to add a personal touch to the experience. If you’re the kind who loves to pamper yourself with fine cuisine and luxury accommodation, this place should be pretty high on your list!