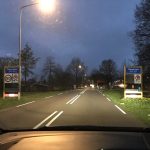 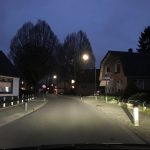 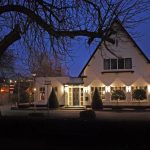 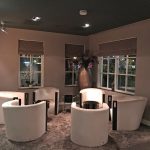 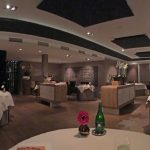 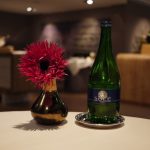 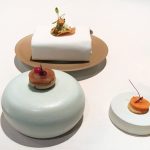 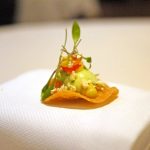 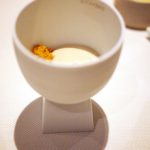 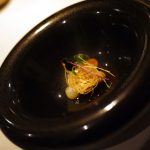 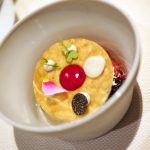 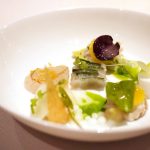 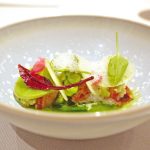 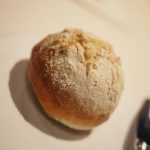 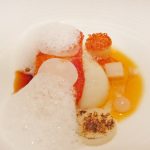 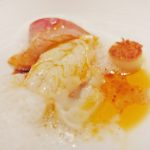 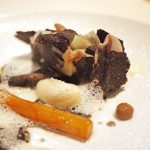 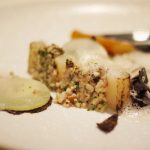 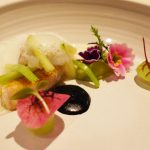 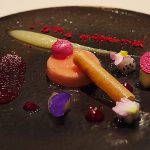 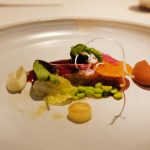 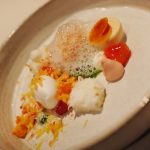 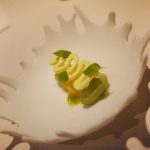 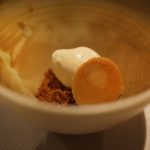 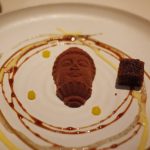 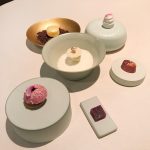 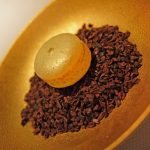 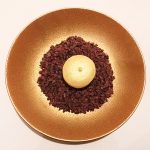 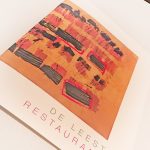 Image 1: It’s been a long working day in Amsterdam, and I’ve been driving east for two hours in rush-hour traffic. Finally, I’ve arrived at my destination – the village of Vaassen.

Image 2: My GPS leads me to a quiet residential area, which makes me want to double check the address – it’s hard to believe there are any restaurants in this neighbourhood, let alone a Michelin 3-star!

Image 3: So, when I finally drew up near a traditional Dutch house which resembled a restaurant, I was relieved to hear my Sat Nav tell me that I had "Arrived at destination". And it was good timing for dinner too – just after sunset. The house was originally a owned by a shoemaker - hence the restaurant’s name, de Leest, which is Dutch for the iron cast used for making shoes.

Image 4: I entered, and immediately on the left was the lounge area, sporting modern décor, while on the right …

Image 5: … was the dining room. Initially, I was the only diner on this quiet Tuesday night (hence able to take a panoramic picture), but I was soon joined by two more couples. It almost felt like private dining! In charge of service was Kim, supported by three other staff , while - in the kitchen - was her husband, chef Jacob Jan Boerma (who headed up a Michelin 2-star restaurant near Amsterdam until 2001). It was in 2002 the couple fell in love with this village and settled here, gaining one star immediately, a second in 2007, and then the ultimate accolade of three stars in 2014, one of only two such establishments in the country!

Image 6: I was pretty peckish, so I ordered the full tasting menu. Kim was the sommelier, and she gave me a full overview of her wine list. But, realising that I faced a two-hour drive back to Amsterdam, she suggested that I pass on the wine pairing, and go instead with a glass of champagne, plus a glass of white and a glass of red, spread across the whole evening.

Image 7: As you’d expect at this type of restaurant, there was an impressive amuse bouche to kick things off – a disk topped with tartare of seabream, smoked onion, and tomato, plus a tiny cookie layered with pumpkin, parmesan, and curry dust…

Image 8: …And a taco with avocado and gooseberry gel, sprinkled with bits of salted popcorn…

Image 9: …then a stylish bowl of peanut-flavoured parsnip foam with a touch of ginger. In many places, that would be the end, but not here. I also had…

Image 10: …A piece of local trout and pumpkin, dressed with soya and ginger, and garnished with a crisp Moroccan dough. Plus, last but not least (for the amuse bouche)…

Image 11: … a combination of prawn, red beet and truffle, decorating a corn crisp. What a start! It was truly at 3-star level. From the combination of textures to the innovative flavours, every bite was a winner!

Image 12: The cuisine here is definitely seafood oriented, and it works for me! This was the first course - scallop and oyster. There were two preparations of scallop (tartare and grilled), as well as two of oyster (mousseline and poached), and the plate was finished with oyster leaf, dill, yuzu and lemongrass-flavoured marshmallow. It may sound overly complicated, but Chef Jacob was still able to let the freshness of the ingredients shine through! The elegant saltiness from the oyster, the sweetness from the moist scallop, the refreshing fragrance from the shiso – none of it was lost in this great combination. World class, for sure!

Image 13: Now to meatier seafood – this time, slowly-cooked lobster, together with peas and marinated apple, then finished with dill vinaigrette. The lobster was carefully cooked, giving a slightly bouncy texture in the centre, and the peas were sweet with an appealing grassy freshness – but the acidity from the apple and the dill vinaigrette dominated the dish. Pity.

Image 14: At that point, a warm sour dough bread was served.

Image 15: If the Asian influence wasn't yet obvious from the ginger, yuzu and lemongrass, then it was about to become so! Because, blanketed under a piece of tandoori bacon was…

Image 16: … langoustine cooked in vadouvan (mixed Indian spice), accompanied by sour crow and lightly smoked shallot. The bacon was soft enough to melt in the mouth, though it was on the salty side – but that's precisely why it should be eaten together with the langoustine. They knew how to handle seafood, that’s for sure. The spice was applied in exactly the right way, so that it didn’t destroy the delicate seafood in the slightest and, together with the hint of smokiness from the shallot, this made it my favourite course of the meal.

Image 17: I think it’s safe to say that Chef Jacob loves his foam! In fact, pretty well every course had foam on top. Still, it works. This course is all about earthiness - smoked black salsify, along with roasted turnip and mousse of shitake, covered with winter truffle and finished with a mushroom jus.

Image 18: There was even a mix of finely-chopped bacon and mushroom stuffed inside the turnip. Nice break from the seafood!

Image 19: And now more fish – though I’m certainly not complaining! This time, it’s salted cod from the North Sea, topped with pieces of chopped squid. There were also flavours from bone marrow, vegetable puree, coconut, green curry, lime - and even foam of lemongrass. It was a decent course, but - with all the oriental flavours - it felt rather like a refined cod dish in Thailand.

Image 20: Thoughtfully, they kept the richness of foie gras until after the seafood. And it was another complex plate – a disk of silky duck liver, surrounded by rhubarb, pitaya, redcurrant puree, apple coulis and dragonfruit. For me, the best part was the balance between the richness of the foie and the fruity-sweetness from all the other components. Good. And I mean really good. One of those rare occasions when you wish the flavour could stay in your mouth forever.

Image 21: After this, the main course was a bit flat - Dutch lamb, vadouvan, green herb, fermented garlic and onion. Really, it was a very standard preparation, and I found the texture of the lamb rather dense and dry - almost like eating roast pork!

Image 22: After a short break, I was served a Gin & Tonic ice cube to cleanse the palate. This was followed by the first dessert, made from a mixture of coconut, blood orange and orange in variety of textures - mousse, puree, gel, marshmallow, meringue, ice cream, and (what else?) foam!

Image 24: The final dessert came with banana ice cream on the side and …

Image 25: …This! I admit that it puzzled me at first, so I finally asked Kim – why the Buddha? It turned out that the couple have travelled a lot, and have had made several visits to Bangkok as guest chef. Hence the inspiration – an extremely silky and delicate chocolate ganache. It must involved some techniques to maintain such a delicate texture in its shape of Buddha face, before drizzled around with caramel, calamansi, liquorice, sherry and vanilla. A satisfying and sophisticated finish to the meal!

Image 26: One thing you know about a true Michelin 3-star, is that it will pamper you with food from beginning to end. And this was no exception. The petits-fours finale was as tasty as it was well-presented, consisting of raspberry pâte de fruits, blackberry marshmallow, aerated coconut white chocolate, soft raspberry meringue, hazelnut caramel chocolate and ....

Image 27: … this extremely striking golden macaron, made with citrus and gold!!!

Image 28: I couldn’t resist one last photo, before heading back to my car and starting the long drive back.

Image 29: The service was flawless and the food was top-notch, using best of ingredients (though I found the Asian influence a little too much). The restaurant was everything I expect a Michelin 3-star to be, however, it lacked some memorable courses. So should you go? Well, if you’re in the area, sure - you’re bound to enjoy it.