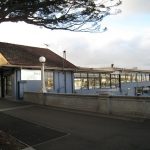 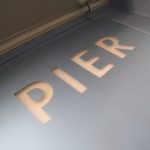 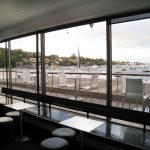 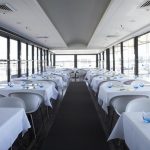 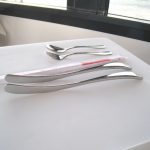 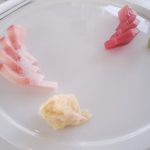 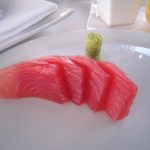 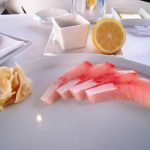 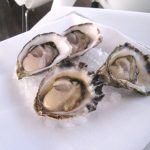 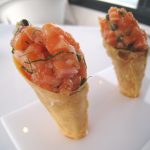 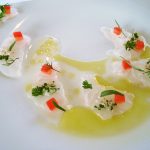 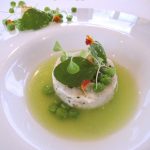 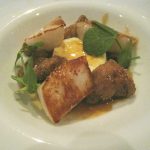 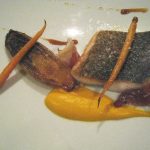 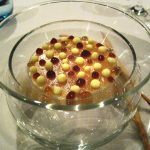 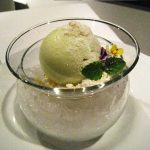 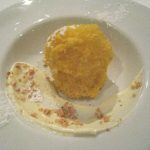 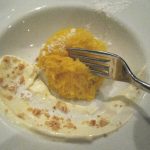 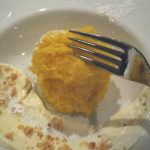 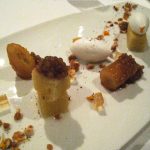 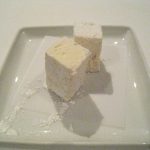 Image 1: Closed since 2012. This album is now for historical purpose only.

Image 3:
This place is pleasant with a lounge area and a patio by the bay.

Image 4:
A long dining area extended into the bay, it made us feel like we were walking out into the sea!

Image 5: Chopsticks together with trendy silver cutlery! Well, they should invest in better chopsticks rather than ones taken from Chinese take-away.

Image 6: Our waitress recommended their "sashimi of the day": king fish and yellow fin tuna. Without hesitation, we ordered a portion to share. Wonderful!

Image 9: She also said they had Rock oyster and Pacific oyster that day, so again, we ordered two of each.

Image 10: After those quick detours, we finally started our Degustation Menu. First came the "Cone of King Salmon Tartare". It is a replica of Chef Keller's signature Salmon Tartare Cornette.

Image 12: Flaky tender spanner crab along with moist scallop ceviche. A very decent course, just wasn't sure what the peas were doing there.
2007 Te Awa Sauvignon Blanc - Hawke's Bay, New Zealand
So far so good, but after a few courses of seafood's delicate flavour, we were craving for something heavy, strong, and powerful - something to awakens our taste buds.

Image 13: Yes, this was the dish! There were two main characters in this course - Pan roasted scallops and sautéed veal sweetbreads, with an interesting cauliflower tofu in the centre. The rich sweetbreads provided a great depth to taste, yet not enough to overshadow the mild freshness of the scallop. Both the texture and flavour were spot on. Well done!
2006 Farrago By Farr Chardonnay Viognier - Geelong, Victoria

Image 14: The last main course was fish. The light sweetness from the caramelised witlof (a Belgian white leaf vegetable) worked well with the crispy skinned cod, but the Serrano ham was way too salty, and the bitterness from both the carrot puree and the bitter orange reduction was simply awkward!
2007 Tomich Hill Pinot Noir - Adelaide Hills, South Australia

Image 16:
If cheese isn't your cup of tea, they can make you a kiwi pineapple sorbet!

Image 19: It kept bouncing back to its original shape! It was so light that I could hardly feel eating it. Interesting!

Image 21: The mignardises were weak, just a simple marshmallow but with tangerine flavour.

An excellent seafood restaurant with good service and a lovely dining room.