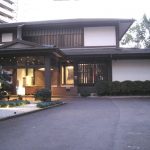 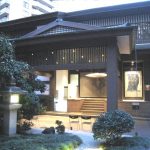 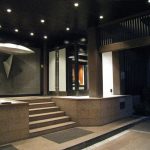 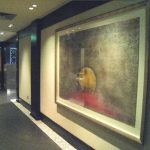 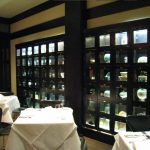 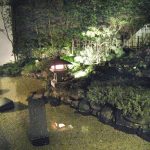 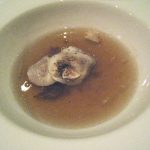 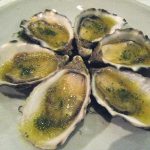 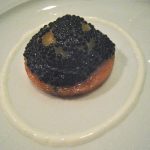 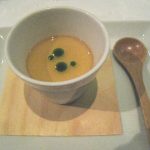 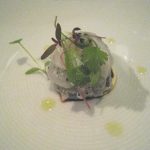 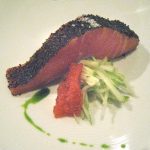 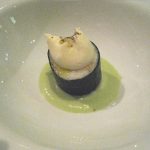 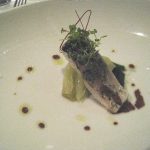 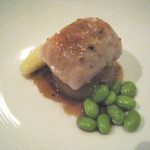 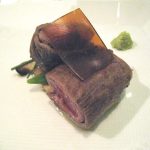 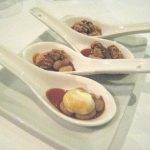 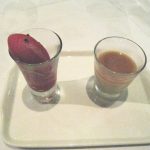 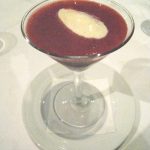 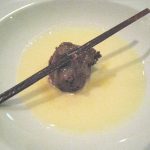 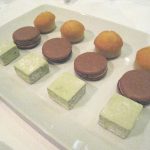 We arrived at the most highly rated restaurant in the Southern Hemisphere at that time. We haven't had such a high expectation for a long while.

Image 3: We arrived 15-min early in a cold winter evening but they refused to let us in, not even in the lounge area. We were elegantly dressed without any thin overcoat. It was a long 15 minutes to stand outside with wind constantly blowing at us. Not a good start!

Image 4: Finally, they let us in and all of us had to use the restroom to fix our hair and warm ourselves with warm water.

Image 5: The dining room had a wall of small boxes containing various antique-looking items. The manager explained that those were the lockers left from the original structure but they turned it into an antique display.

Image 6: Right in front of our table was a Japanese garden with flowing water. Nice backdrop!

Image 7: Porcini and chestnut mushroom consommé with shaved mushroom. It was good, but not a spectacular start.

Image 9: Smoked ocean trout topped by a frozen egg yolk covered in avruga caviar with curd cheese around the plate. The smoked fish was salty by itself but the yolk lightened it a bit.

Image 11:
Marinated Crystal Bay prawns sticking onto a soy caramel underneath. Rather ordinary!

Image 12: We already had trout three courses ago, but this was Tetsuya's signature dish. Slow-cooked in olive oil, a huge confit of Petuna Tasmanian ocean trout with konbu, apple, daikon and wasabi. Both the colour and texture were like raw fish. It was a generous portion, actually too big. First few bites were excellent, but the strong fish flavour and the heavy dose of salt were overwhelming after a while. Most of us left half of it untouched!

Image 13: We already had enough of chilled seafood at that point, but still more to come -- a terrine of spanner crab (yes, another repeated ingredient) with avocado sauce. Glad that it was only a tiny piece.

Image 14: Finally something warm -- a grilled fillet of Barramundi with braised baby fennel. None of us liked the mushy texture of this fish!

Image 15: Twice-cooked de-boned Spatchcock
First steamed, then grilled quickly just to brown the outside. Nice to have some meat after many seafood courses. The braised daikon at the bottom with bread sauce did a perfect job of complementing the meat.

Image 16: A piece of Japanese lime jelly reclining on a thin slice of tender Wagyu sirloin, rolled and seared, with wasabi on the side. Unfortunately, our A5 Kobe beef meal in Tokyo a week earlier had stolen the spotlight of this beef here, by far! What a shame!

Image 17: This was the cheese course I guess: Cannellini beans in cameral topped by Mascarpone

Image 19: A martini glass filled with strawberry puree with shortcake at the bottom topped by vanilla bean ice cream.

Image 20: An ugly looking chocolate mousse with coffee marshmallow in a broth lemon curd as our final dessert.
That was it. That was the meal. Bad meal and high expectation is always the worst combination!

Image 21: Petits-fours: Green tea marshmallow, chocolate macaron, coffee cake.
We love French cuisine and we love Japanese cuisine. Being the best restaurant in the country serving French-Japanese cuisine, we thought this would be THE ONE! Oh well... Smooth service though, the manager even did a quick kitchen tour for us on our way out.