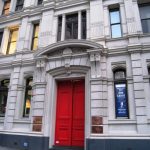 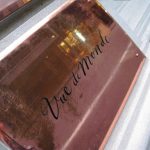 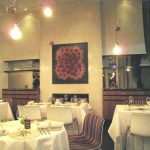 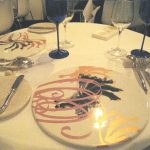 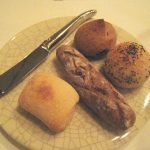 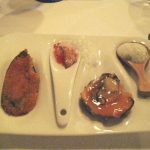 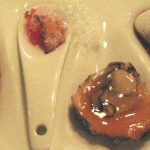 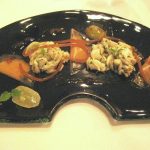 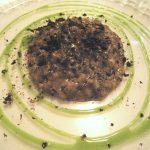 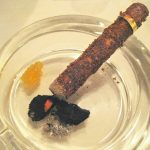 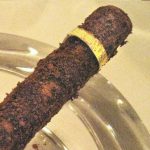 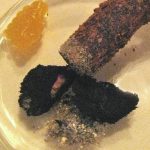 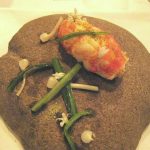 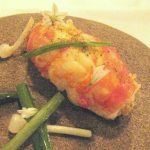 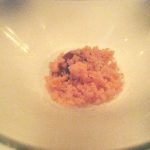 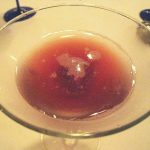 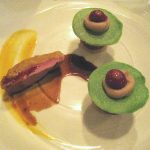 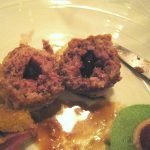 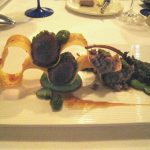 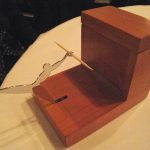 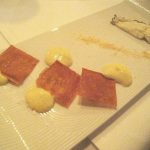 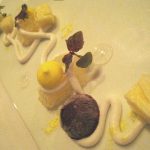 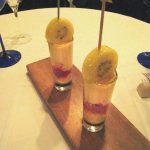 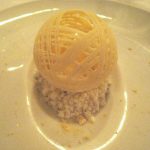 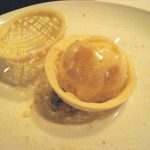 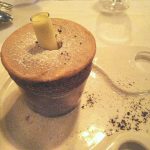 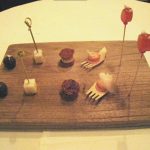 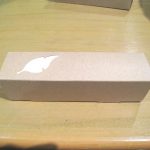 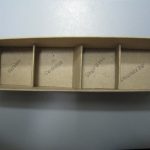 Image 1: This historical building was originally home to barristers before the restaurant took its place. Vue de Monde has relocated to the 55th floor of Rialto building shortly after our visit.

Image 5:
Within a minute, they already swamped our plate with fresh bread.

Image 6: AMUSE BOUCHE
Starting on the right, a pea foam, followed by an oyster in citrus jelly with smoked salmon underneath, then an innovating watermelon and ham, and finally a baked mussel with a cheese crust.

Image 7: It was an eye-appealing introduction, but the watery sweet watermelon together with greasy salty ham were unpleasantly strange; and the oyster flavour was completely crushed by the unbearable saltiness from the smoked salmon which required a sip of water. Not a great start!

Image 8: CRABE SAUTÉ
Sautéed spanner crab served with crab liver mousse ravioli and grape.
The creamy liver was tasty, but too intense which made the meat rather tasteless. What a shame! Also, got no clue what the grapes were doing in this dish.
2009 Best’s Riesling Great Western Grampians, Victoria

Image 10: FOIE GRAS EN CIGARE
We already sensed burning smoke approaching and it turned out to be one of the most spectacular looking dishes in our life. We knew a few other restaurants serving something similar but this was our first time seeing it. It was a foie gras terrine inside a chocolate dusted pastry ...

Image 12: ...and further enhanced by an edible burning coconut charcoal and apricot jam! Crazy but delicious! The silky terrine with a thin crispy crust along with the chocolate bitter-sweetness was actually an excellent combination! The burnt coconut was too bitter to eat though!
2008 Paradigm Hill Pinot Gris Mornington Peninsula, Victoria

Image 13: ÉCREVISSE RÔTIE
Roasted marron with bisque glaze and wild garlic served on hot river stone.
Marron is a freshwater crayfish only found in Southwest Australia. It had similar texture as lobster and a bit less salty.

Image 14: Nice course except that the hot stone had slightly dried out the bottom part of the meat.

Image 16: Our server then poured in a verjus and told us to experience minus 8 degree juice! He went on to explain how they used vibrate-freezing so that the juice remained liquid even though below zero. Well, by the time he finished explaining, I am sure it wasn't below zero anymore. It was just a very chilled verjus.

Image 18: The highlight of the our meal was these duck meat balls. It looked dry and overcooked from the outside, but it was actually encased with sauce inside which kept the meat moist even after being deep fried. Haven't had such a juicy meatball before. Marvellous!

Image 19: MILLEFEUILLE DE LIEVRE
Delicately stacked on top of mashed peas were two layers of hare breast, hare rib, and minced hare with saffron jus. It was cool to have a contrast of three different parts of the meat!
2006 Dry River Syrah Lovat Martinborough, New Zealand

Image 20: Main course is over. They brought us an entertaining Alessi toothpick holder. You press this little guy and he will pick up a toothpick for you! Not surprisingly, we were pressing him over and over again just for fun.

Image 23: A golden kiwi lollipop smothered by a refreshing peppermint jelly placed in a shotglass of raspberry and sabayon.

Image 25: Hiding inside the cage was a fragile caramel sphere with passion fruit foam and purée. A lovely textural contrast between the foam, purée, and the brittle sphere along with a sip of chenin blanc which gave a sweet honey touch to this elegant fruity dessert!

Image 27: A sophisticated petits-fours: Raspberry lollipop, bubble gum macaron, chocolate milk caramel, soft melon, and caramel chocolate. An interesting note on the macaron -- not only it had a bubble gum flavour, its gummy sticky texture resembled a bubble gum too! It was an "edible bubble gum", very clever!

Image 28: CHOCOLATS À SAVOURER À LA MAISON
As with any French haute cuisine, a box for ladies to take home.

Image 29:
The box would reveal the flavours after you ate the chocolate! Very smart idea! It was a wonderful meal and I see a good potential of Shannon's cooking. Need to plan a revisit!