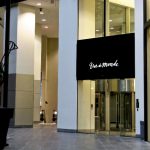 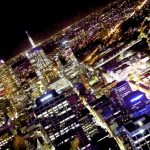 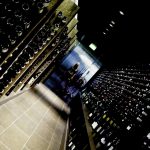 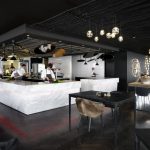 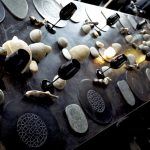 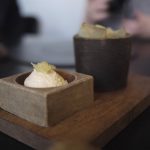 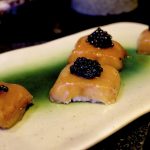 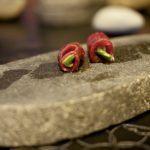 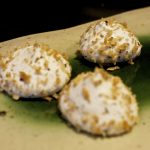 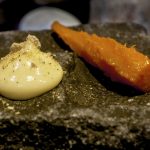 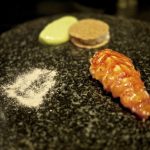 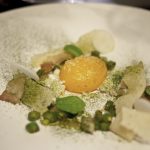 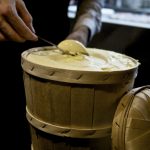 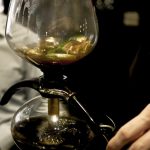 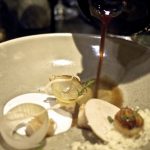 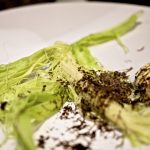 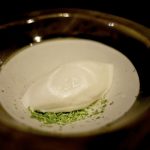 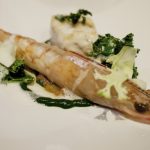 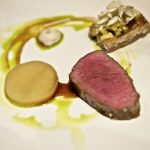 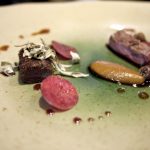 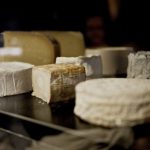 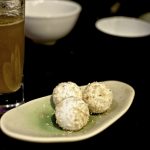 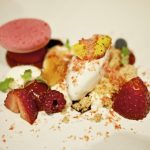 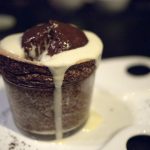 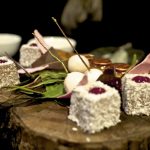 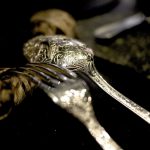 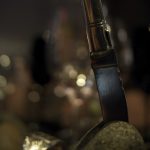 Image 1: Review contributed by DWB. See here for full version.
How Vue de Monde has not dominated the Gourmet Traveller list is still beyond me. I guess it’s one of those unexplainable mysteries in life, just like how Iggy’s in Singapore made the San Pellegrino’s 50 Best Restaurants list when I wouldn’t even consider them in my top 200.

Image 2: Sadly it was a couple of years later that we finally had the opportunity to return in style by hiring their private Dom Pérignon room for our wedding guests as a number of them had flown all the way from the many corners of the world. Suffice to say, our guests were blown away immediately at the start of our meal by the stunning view of Melbourne by night as a backdrop.

Image 3: Upon arriving at the restaurant via a dedicated express lift, diners have the option of commencing the evening with an aperitif at the Lui bar. As a bonus we got to try some of their delicious and unique cocktails. After taking what felt like a few hundred photos of the view, we were finally escorted through the wine cellar to their restaurant and into the private dining room.

Image 4: At first glance the room looked slightly cold and modern but at closer inspection you began to comprehend there was much more to it. The thought and attention gone into Ross Didier’s sophisticated furnitures embodied and captured the spirit and soul of Australia. This was Australiana without being kitch and I loved it.

Image 5: The armchairs had been upholstered in kangaroo leather and skin, making it extremely comfortable for the six hour tasting menu we were about to embark on. Even the pebbles scattered across the table turned out to be more than decoration and played an integral part of the meal as the night progressed and the menu unfolded.

Image 6: A glass of NV Larmandier Bernier ‘Cuvée Vue de monde’ Vertus Champagne was poured out for everyone to start the evening with some hand-cut parsnip chips and a macadamia and apple dip.

Image 7: The meal then kicked off with an array of amuse bouches starting with Smoked eel, white chocolate and caviar. This had a good textural contrast of the brittle caramelised coating and soft eel inside, although for me there wasn’t enough seasoning coming from the caviar.

Image 8: This was followed by Salt cured Wallaby and wasabi. The dried meat reminded me of a very high quality bresaola. I thought the wasabi was a very clever addition as it cut nicely into the meat.

Image 9: The Truffle marshmellow had a nice crunch from the bread crumbs although the truffle was a bit lost for me.

Image 10: Lastly we were served a Carrot with egg and brown butter emulsion and oyster. It had a good level of sweetness. This was an interesting dish and the flavours reminded me a lot of the langoustine from Noma.

Image 11: First course of Roasted marron with tarragon butter. The plump freshwater marron tail sourced from Western Australia was handled with the utmost respect, and it was lightly roasted to keep it moist and juicy. On the side was a sandwich of crispy kohlrabi with a creamy marron filling. It was a very good dish. Shame they didn’t have two tails!

Image 12: Next up was the Duck yolk, pork, green beans and mint matched with a generous glass of 2003 Dom Pérignon. The yolk had been poached at 58 degrees celsius so that it oozed beautifully over the crispy pork and green beans. The only thing I felt was missing to this delicate dish was a bit more seasoning. Overall I didn’t feel there was enough pork for that seasoning element. So close to a perfect dish. What a shame!

Image 13: Head Chef Cory Campbell came in with a wooden bucket on a trolley. It contained the luxurious Échiré butter, typically served in three star establishments in France and a long standing favourite amongst the European royalties. He scooped out a few quenelle and served it with a beer and fennel sourdough. As mentioned countless times, I’m partial to good butter and bread, and this was delicious.

Image 14: The next dish of Melbourne onion soup illustrated this juxtaposition. Charactertistic of Bennett, he displayed his interpretation on classic French cuisine by adding a local twist, using an instrument that would normally make the Melbournian’s favourite beverage: a coffee siphon. The onion consommé which had been brewed in advance for 48 hours at 96 degrees celsius was heated up using a blowtorch, forcing the liquid to slowly cascade to the top where it was infused with fennel herb and caramlised onion.

Image 15: The mixture was then poured into each individual’s bowl over an onion prepared in multiple ways - charred, pickled, crisped and poached. The finishing touches included shavings of comté cheese, crispy croutons and macadamian gel set in agar. The result was a remarkably sweet and intense onion soup which had the right balance of cheese and variety of textures. I always find it quite risky to serve soup at a fine dining restaurant but this dish was outstanding and inspired. It was remarkable.

Image 16: Next up was Sweet baby corn, brown butter and black truffle. The black truffles sourced from Western Australia were from the same specie as the highly prized Perigord truffles (tuber melanosporum). The baby corn cob cooked and presented in its husk with the brown butter emulsion had bursts of flavours; so much so that I ate the husk as well! The black truffle shavings added an earthy element to this simple yet delicious dish.

Image 17: It’s not uncommon to have a second palate cleanser between segments of the meal although Vue de Monde is the only place I know that does this in Australia. A bowl containing a beautiful herb and flower salad was presented. Liquid nitrogen was then poured over the top, and the instantly frozen salad subsequently shattered using a wood pestle. Once settled, a quenelle of Grapefruit and lime sorbet was placed on top to produce a very refreshing palate cleanser.

Image 18: Following such a invigorating palate cleanser, the first of the three main dishes was Prawn, smoked barramundi, nettle, young garlic, lettuce. This was another classic Australian dish where the prawn was prepared “on the barbie” to give a smokey taste and smell. It was accompanied by a clean and flavoursome Barramundi which had been preserved using the Japanese method of ”iki jime” (spike to the brain) in order to retain freshness, flavour and the most humanely possible way.

Image 19: Finally on to some red meat with the Flinders Island Lamb, olive, Australian anchovies, mustard. The lamb was served two ways - a roasted loin and a crispy belly – and certainly melted in your mouth. Just like the wallaby I had tried at Attica from Flinders Island, it was of superb quality. I was not very fond of the crust of seeds around the belly however and would have preferred a naturally crispier skin. Whilst the lamb was superb in quality, I thought the overall flavour was quite average.

Image 20: I had some great memories from the wagyu course I had here last time and was hoping to see it appear in the menu again. I was in luck! Blackmore Wagyu served with beetroot, saltbush, BBQ sauce, and truffle. The cheek and tenderloin of the locally reared beef was riddled in marble and melted in your mouth. The sweet home made BBQ sauce was lovely on its own but I felt it completely dominated everything else. What’s more, I felt there was not enough seasoning on the dish.

Image 21: The cheese was decent and I was very impressed that they actually had a tea to match the cheese course with the Hong Shui, Oolong tea, Taiwan.

Image 22: The third and last palate cleanser of Passionfruit, liquorice and coconut “beer”. I don’t particularly like liquorice but thought it worked really well as an aftertaste with the passionfruit and coconut sorbet.

Image 23: My favourite course of the evening was the first dessert course of Strawberries and cream. It had nailed all the elements from the creamy ice cream, crunchy and chewy meringue to the fragrance emanating from the cold shavings of frozen strawberries. The icing on the cake was the natural sweetness coming from the strawberries which was divine. I was impressed at how such a simple dish could be so delicious.

Image 24: The Chocolate soufflé, chocolate mousse, crème anglaise was rather decadent and luxurious, and a not so subtle reminder of the French influence in Bennett’s cuisine. It was definitely in the best five soufflé I’ve had. The crème anglaise was much needed to balance against this imposing tower of chocolate sweetness.

Image 25: We finished the evening with an array of Australiana themed petit fours. My wife had to explain the “cultural” significance of each item to our foreign guests as we appreciated it was not necessarily obvious. We were served: chocolate mousse lamingtons with raspberry coulis inside (a typical Australian cake), musk flavoured eucalptus leaves, gin jellied one penny coins (used to play two-up, a traditional Australian gambling game which is now illegal except on Anzac day) and eucalyptus flavoured sorbet balls.

Image 26: It was close to 2am when we finally got the bill. We left with some goodie bags which contained some brioche bread, tea, honey and muesli. A lovely touch indeed but had the whole experience lived up to my expectation? I thought the food on the whole was great and the service stepped up a notch from our last visit as it was flawless throughout the evening. Nothing seemed too much of an effort for the exceptional front of house team and we were all impressed.

Image 27: There was of course the matter of the two disappointing meat courses, and I noticed across my two meals there that there was a tendancy to incorporate emulsions repeatedly which felt tiring after a while, both in terms of texture and flavour. Compared to my experience at Attica, I felt the latter had made greater strides in evolving its dishes since my last visit. I know it’s like comparing apples and bananas. Regardless, to me these two restaurants are currently my favourite in Australia and by quite some distance.