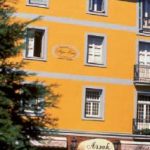 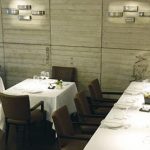 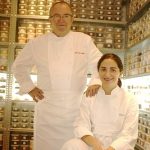 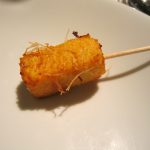 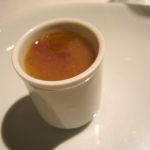 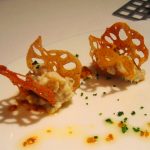 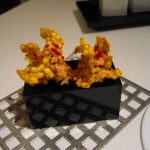 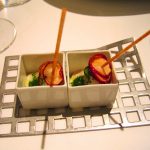 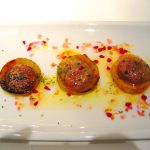 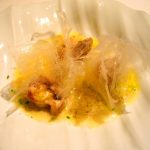 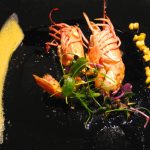 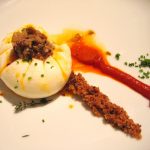 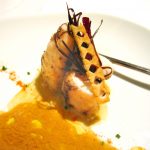 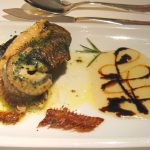 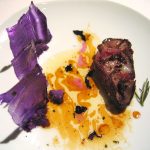 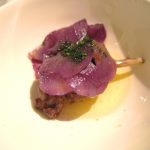 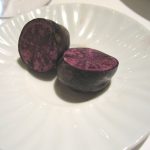 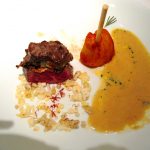 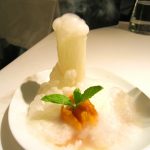 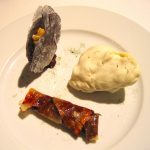 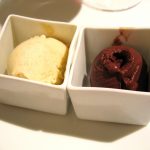 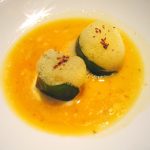 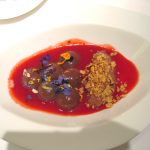 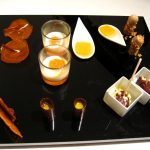 Image 1: www.arzak.info Chef: Juan Mari and Elena Arzak
Inside this little house is the home of a father-daughter kitchen team producing one of the most famous modern Basque cuisine.

A modern dining room with automatic sliding doors connecting to the lounge and kitchen.

Image 3: The friendly chef Elena came out to chat with diners whenever she got a moment. She explained some of her creations in detail. She carried a beeper with her all night and had to run back to the kitchen when it started beeping. This is their testing lab upstairs containing 1000+ flavours.

Image 4: Amuse Bouche
A lovely skewered rock fish cake - crispy outside, but soft and flaky inside.

Image 5: Amuse Bouche
Chinese often use red bean in dessert, but here they served us a red bean and apple soup. It was our first time seeing red bean from a western kitchen. There wasn't much taste to this bland soup though.

Image 6: Amuse Bouche
A cute looking fried lotus root crisps with fish in between. Nice combination of taste and texture with a strong hint of sesame oil.

Image 10: Oysters from the west coast of Spain blurred by transparent layers made from potato skin with garlic puree underneath.

Image 12: This adorable item was actually a poached egg with runny yolk inside, served with diced mussels on top and decorated with fried bread crumbles and tomato paste. A very simple poached egg that everyone can make at home, but it was precisely timed with a clever and complex combination of mussels and bread crumbs that made all the difference!

Image 13: Reclining on the fatty Monkfish in fish liver sauce was a cute little fried fish bone! Elena told us it was traditional to have monkfish bone with monkfish. Another interesting plate!

Image 14: Another choice was sole with "completely blackened" orange peel underneath, accompanied by fried sole fin and concentrated sole juice with balsamic vinaigrette. This fatty fish had a delicious flavour, but it was a shame that the bitter charcoaled orange peel destroyed the dish. Elena explained to us that in Basque it was traditional to eat sole with lemon, so orange peel was a variation from tradition.

Image 16:
Accompanied by duck leg on the side covered in blue potato.

We had never seen a blue potato before, so our server brought one out from the kitchen.

Image 18: Another choice instead of the duck was a beautifully cooked rare beef loin with a piece of grilled beef lung on top, served with crispy rice, potato, and a Macadamia nut sauce.

Image 19: Alright, time for dessert. First, a bubbly show using dry ice and pineapple juice. Well, this chemical reaction was fun to look at but a bit gimicky.

Image 20: Then, a shellfish-look dessert. A chocolate mousse wrapped in a thin slice of mushroom, a sorbet foam, and dried peach sandwiched in two slices of "silver-plated" chocolate.

A traditional Spanish dessert made with orange juice and herb jelly.

Image 23: On the left were glossy and fragile chocolate balls with liquid inside, called "Chocolate Grapes". On the right was chocolate mousse covered in some crunchy cereal-like stuff. This was the best dessert course among the five desserts!

Image 24: Petits-Fours
Starting from the top left were some mango crisps, then two glasses containing milk and apricot followed by spoons of pineapple and syrup, and intense red bean paste dusted with some nuts. On the bottom left were caramel followed by chocolate tubes filled with lime, then a pair of white containers with dark chocolate dusted with diced white chocolate.
Overall, a very innovative meal with hits and misses!