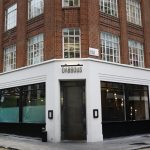 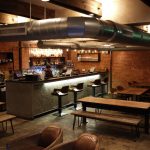 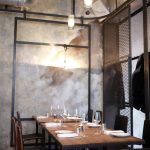 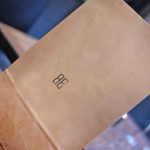 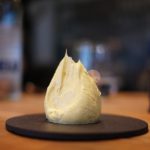 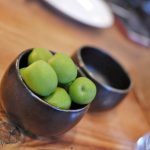 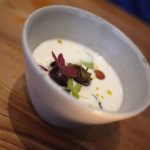 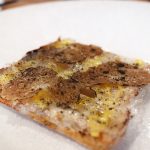 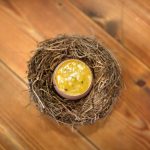 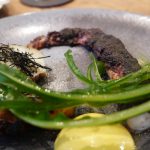 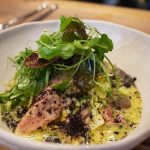 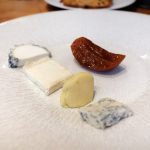 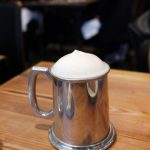 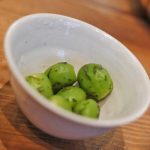 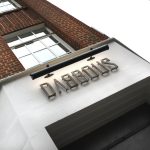 Image 1: Many young chefs jump around between Michelin-starred kitchens to gain experience, before establishing their own place. And Ollie Dabbous was no different. His career began in the kitchen of before moving on to some of the big names such as , , , and . But what made a real difference for Ollie’s new restaurant was a rare 5-star review from leading national critic Fay Maschler, shortly after its opening in the January of 2012.

Image 2: The effect of this praise was huge. Overnight, almost, Ollie Dabbous became famous, and the next I knew, there was a 6-month wait for the next available table. Well, there are a few lucky people in every industry!

Image 3: On the ground floor was the (low-key) dining area. The décor seemed cheap, and it probably was! With metal cages and an unpolished concrete floor, it looked basically like a few wooden tables at the corner of a public parking lot. I’m not sure if it was uber-modern or just tacky!

Image 4: Mind you, the price of the menu was just as inexpensive, which was one of the reasons why diners were willing to wait months for a table. For £59 you get a 7-course tasting menu from a chef who’s been trained in the top kitchens across the continent. The meal started with warm walnut sour dough bread inside a brown paper bag – consistent with the décor.

Image 6: Before the first course, a small bowl of jumbo olive – there was no amuse bouche. Again, I kept in mind that this was low-cost dining.

Image 7: First up, Muscat grapes with lovage, with sweet almond milk poured on top. The combination was delightful - crunchy almond, juicy grapes, and sweet milk; but why serve a pre-dessert to start off the meal? Bizarre!

Image 8: Then lard on toast with black truffle! Thin and crispy, with sinfully addictive layer of fat. I mean, who wouldn’t like it? Great snack, except that the black truffle made no contribution to the dish. Unnoticeable, really.

Image 9: One of the signature dishes of the restaurant - coddled egg with mushrooms and smoked butter in an egg shell. A visually appealing dish - rich, creamy, earthy, well-seasoned. This was definitely my type of food!

Image 10: One more course before the main - Barbecued octopus, coated with mustard seed sauce, Jerusalem artichoke, and hollandaise sauce. I liked the fact that the octopus was very tender with a hint of sweetness from the mustard sauce. Delicious!

Image 11: The main course was, well, terrible, to be honest. . Basically it was pieces of ham hock with a pile of autumn vegetables, smothered in a salty sauce. I finished most of it, but left the bottom untouched as it was saturated with sauce.

Image 12: A selection of four British cheeses: goat, sheep, cow, and a blue cheese from goat, paired with poached pear.

Image 13: Interestingly, the dessert was served in a steel tankard. It was a thick and sticky hot caramel with cashew nut butter, blanketed under a cold ginger beer and lime foam. . I wasn't sure why, but it had a very unpleasant odour! True, the cold and airy foam was refreshing, but combining it with hot, rich, and sticky stuff at the bottom just didn’t work for me! I left it untouched after just two spoons. Disaster!

Image 14: To finish, a Japanese baby peach. This was ideal for cleansing my palate after the dessert. These tiny olive-size peaches are awesome. Amazingly juicy and sweet!

Image 15: Verdict: Although the coddled egg was lovely, and the octopus course was excellent, they weren't enough to compensate for the disappointing courses in the menu. Also, the standard of the service was quite poor - we had to top up our water ourselves throughout the meal. This was obviously a very hyped-up restaurant, but was it worth months of anticipation? Absolutely not!