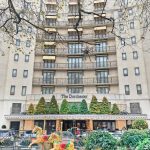 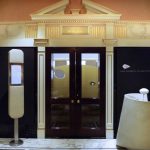 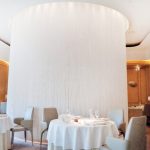 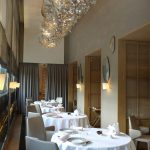 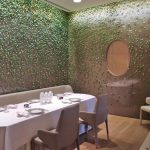 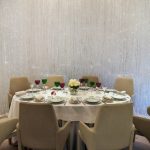 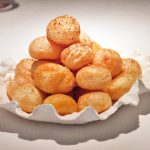 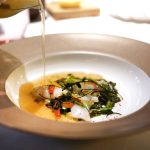 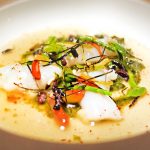 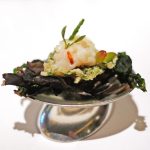 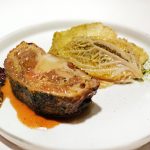 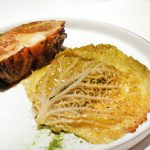 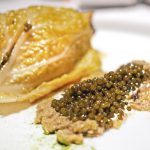 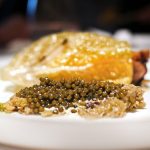 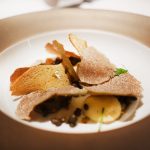 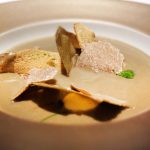 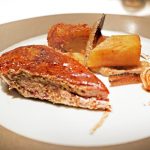 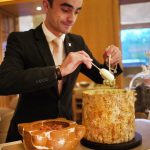 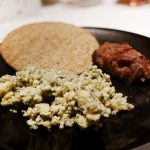 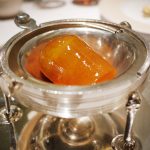 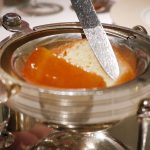 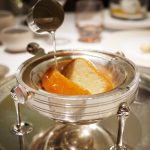 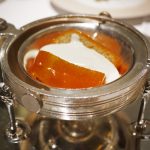 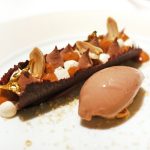 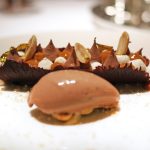 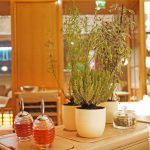 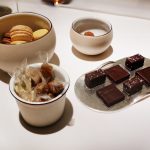 I’ve been here before, in fact, this is my fifth visit! At the time of my first visit (on its opening day, November 2007), the restaurant was headed up by Jocelyn Herland who had come from Paris, where he had been in charge of Ducasse’s Michelin 3-star at the Hotel Plaza Athénée. In relocating to London, he had had a single mission in mind – to achieve Michelin 3-star status for Ducasse’s establishment at the Dorchester Hotel. To reach this goal, Chef Jocelyn designed a rigorous process that, if followed by both the kitchen and service team, would ensure that each and every dish was prepared and delivered to the highest possible standards. And it worked – by pulling together as a team, Chef Jocelyn and his colleagues accomplished their mission in less than three years!

So, in 2016, Chef Jocelyn relocated back to Paris, to run Le Meurice (which I visited last week), the latest of Ducasse’s fine dining establishments. In charge of the London restaurant today is experienced chef, Jean-Philippe Boulet, who has worked for Ducasse Hong Kong and Ducasse Monaco.

As it was a lunchtime during the Christmas period, the table had a low-key festival theme, mainly in the form of a Christmas cracker for each guest. We amused ourselves by pulling these while waiting for the amuse bouche, which as usual was Gougère, small, airy cheese puffs filled with Gruyère. Delicious! I can’t get enough of them!

The dishes on the set lunch menu, however, weren’t quite so interesting, consisting of lentil velouté with duck foie gras royale, topped with jumbo slices of white truffle, and pheasant with boulangère potato. I found the pheasant slightly on the tough side, but both dishes had cohesive flavours. They just lacked a touch of excitement, that’s all.

On a more positive note, the new dishes that we’d selected from the a la carte menu were certainly interesting. The scallop ceviche, for example, was a colourful and vivid plate of scallop, with roe and samphire, served with scallop tartare on rice crisp. A very enjoyable dish highlighting the freshness of the ingredients and offering a fun mix of textures. The most unusual dish of the meal was a whole cabbage stuffed with fermented brussel sprouts, hazelnut and juniper berries. A waiter bought this on a trolley before slicing it and revealing the surprise ingredient – caviar, from China, which was concealed under the cabbage leaf. A surprise, yes, but you won’t find me complaining. Naughty but nice!

Actually, it might be worth a brief digression on the subject of Chinese caviar. In recent years, quite a few Michelin 3-star chefs have started importing sturgeon caviar from China.  This started a couple of decades ago when Kaluga Queen, a company situated about 400 km Southwest of Shanghai, started farming a hybrid of Amur and Kaluga sturgeon, and the resulting caviar was immediately recognised as exceptional in quality. In fact, many considered it to be better than Osetra from France. These Chinese caviar is generally milder than other caviars, as less salt is used in the malossol process, and it’s also a little cheaper than those from France.

Our meal concluded with cheese – we could choose either British Stilton or a cheese plate consisting of four types of French cheese.  I decided on the Stilton, since I’d just returned from a Paris trip and I’d had French cheeses for three consecutive nights already.  For dessert, there was the perennial classic, Ducasse’s Rum Baba, and – to complement the festive menu – a Ducasse version of “Yule Log”, a clever arrangement of chocolate topped with peanuts.

Well, I’ve been to several Ducasse restaurants – Paris, Monte Carlo, and even in Doha, and foodwise, this was my most enjoyable experience so far. That’s because, usually, his cuisine tends to err on the side of safety, so that each dish is essentially a lighter version of traditional French cuisine: perfectly cooked and presented, but perhaps a tad boring. Until now, I’ve never left a Ducasse restaurant feeling that I’ve experienced something new and fulfilling. What made the difference on this occasion was the selection of new dishes from Chef Jean-Philippe – the unusual stuffed cabbage was particularly impressive. It is this creative element that made all of us want to return and discover more of his culinary talent.

In terms of service, we got pretty much what was expected: a friendly and welcoming atmosphere, very observant staff with good attention to detail. It was, for sure, a totally different experience to that of my meal at Le Meurice, which I visited last week!