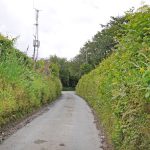 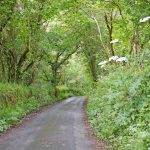 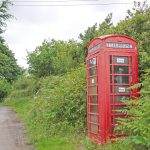 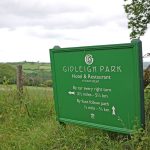 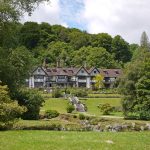 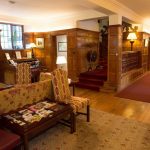 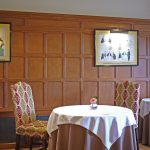 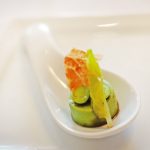 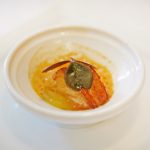 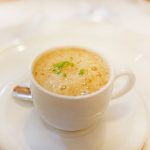 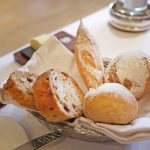 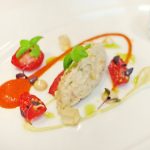 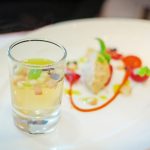 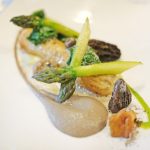 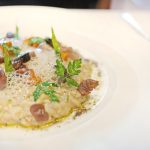 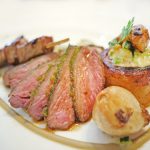 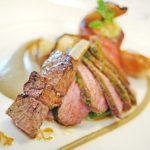 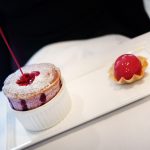 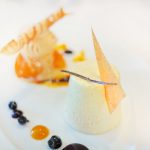 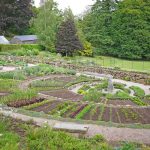 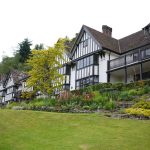 Image 1: If, one day, you’re relying on your GPS, passing through lots of narrow, winding roads …

Image 2: … going deeper and deeper into Dartmoor National Park, you might still be on the right track to where you want to go.

Image 3: But if you suddenly come across this old telephone booth, then unfortunately, just like us, your GPS has let you down. It’s led you to Gidleigh village instead of the restaurant Gidleigh Park!

Image 4: However, it seems that we’re not the only ones who have ended up here! When we turned around, there was a sign, obviously intended for lost souls like us. The restaurant was still a good 4 miles away!

Image 5: After few minutes of driving, a distinct two-storey thatched Tudor style house appeared on the horizon, hidden behind trees. Inside this magnificent mansion, which dates back to the 16th century, is the kitchen for one of UK's top chefs, Michael Caine - a chef who never thought he would be able to cook after he lost the whole of his l right arm in a car accident in 1994! On the contrary, it seems his perseverance and talent can overcome any challenge, as he achieved his second Michelin star in 1999!

Image 6: As we were a behind time for our booking, we rushed in, worrying that we were too late. Luckily, the reception told us that the last order wouldn’t be for another half an hour. What a relief! Surprisingly, despite the house looking huge from the outside, it was actually quite small inside and didn't feel spacious at all. There was a reception area by the entrance, stairs to guest rooms on the first floor, and on the right of the long hallway were the three rooms where meals were served.

Image 7: The dining area had traditionally décor, dominated by wooden panel with lots of sunlight coming through the large window. It was a bit old school, but still a lovely setting to relax in, and enjoy a long lunch.

Image 8: After a quick glance at the menu, the amuse bouche arrived. On a porcelain spoon was green pea mousse garnished with Parma ham crisp. The freshness from the pea was complemented by a touch of saltiness from the ham. Appetising start!

Image 9: Another amuse bouche, this time Fried Cod with tiny chorizo cubes underneath. A nice fish and meat combo with a well-balanced sweet-and-sour lime and tomato sauce. Excellent!

Image 10: Wow, another surprise - a small cup of lobster bisque with diced tomato at the bottom! Not bad, but they should rename it ‘lobster foam’ since it was mostly foam with just a sip of soup at the bottom.

Image 11: A selection of freshly-baked warm bread. I had already finished two before the first course arrived!

Image 12: A refreshing course to kick-off the menu. A quenelle of Brixham crab meat, pieces of sun dried tomato, cubes of tomato jelly - and that was it. Nothing too complex to distract the tastebuds from the sweetness of the delicate crab meat or the deep flavour of the tomato. It was a course all about the ingredients, with everything in harmony. Truly magnificent!

Image 13: The manager told us that they grow tomato onsite and liked guests to taste the superb quality of vegetables they have. No wonder this course came with a shot glass of warm tomato water to prolong the delicate tomato flavours. Great idea!

Image 14: More ingredients from their garden. Asparagus, wild mushrooms and morel purée with boudin of chicken mousse, which was more like a soft chicken sausage. I took a morsel of everything in a single bite and wow - the seductive, earthy aroma coupled with the soft-bouncy texture from the sausage added up to an amazing texture and superb taste. Divine!

Image 15: Next up was a risotto course of wild mushrooms - smooth and creamy without being too thick and heavy, along with a powerful earthiness from the mushrooms. The rice was cooked spot-on - soft with a slight bite! It was then that I became convinced of the correctness of the Michelin's rating - a well-deserved 2-star!

Image 16: For the meat, slices of roasted local lamb, fanned out on top of potato purée, accompanied by a fondant of potato with creamy lamb sauce in the centre. The lamb was carefully cooked with a beautiful pink centre. Although the juicy and tender meat was already tasty enough, the garlicky and charcoaly aroma definitely gave it a further lift.

Image 17: The only unpleasant item of the dish was the lamb kidney skewer which had a strong offal smell. Otherwise, another successful dish!

Image 18: On to dessert, using raspberry as the theme, a raspberry soufflé with raspberry sauce and raspberry sorbet. Loved the temperature contrast!

Image 19: And finally - Poached peach, blackcurrant coulis, vanilla mousse, and nectarine sorbet. Though both desserts were perfectly done, they were both very fruity and I thought they would be even better with an element of chocolate to finish off the meal.

Image 20: As it was a sunny day, we took the opportunity to explore the grounds while discussing our meal. Overall, we thought it was very good, utilising the finest ingredients from the region. Michael Caine had had training from Raymond Blanc, Joël Robuchon and Bernard Loiseau - which explained the classic style of the cuisine with his modern touch.

Image 21: In conclusion - If you’re expecting a cutting-edge meal with visual wonders, you will be disappointed. But if you’re looking for a perfectly delicious meal in a traditional country house setting, there are probably not many places in the country that can beat Gidleigh Park! Moreover, the service was flawless. The only wish I had was to spend a night in one of their guest rooms, but as the cheapest room during the summer was a whopping £400+ a night... maybe one day!