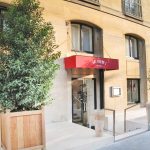 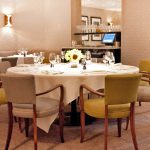 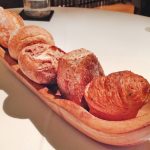 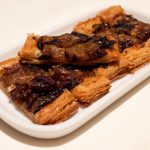 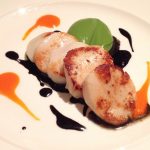 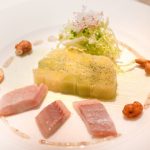 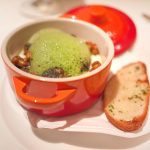 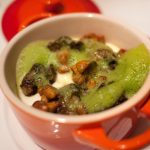 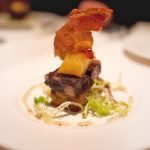 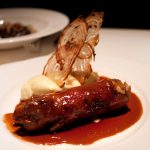 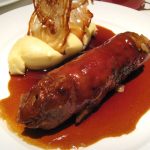 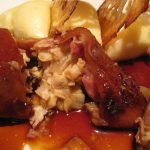 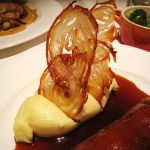 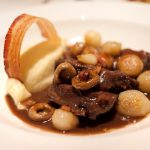 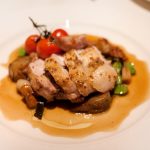 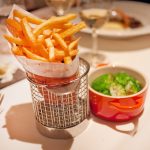 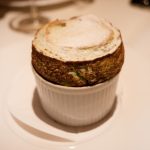 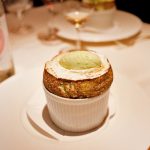 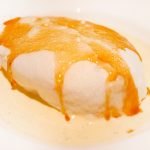 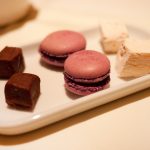 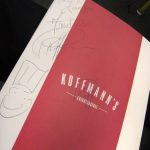 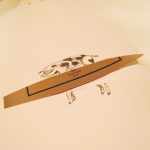 Image 1: It’s surely the biggest culinary comeback of the decade, Chef Pierre Koffmann has returned! Famous, before his retirement, for his Michelin 3-star restaurant, La Tante Claire, Pierre is the man who mentored a generation of British chefs such as Marco Pierre White, Gordon Ramsay, and Marcus Wareing. And now he’s back offering a classic French cuisine in an informal setting.

Image 2: It may be described as ‘informal’ but I wouldn’t suggest going in too casually dressed, as the restaurant is part of the Berkeley Hotel, a luxury hotel in Knightsbridge. As we’ve been here more than a dozen times, we know the drill!

Image 3: There was a team of friendly and smartly dressed staff waiting for diners at the front of house. After our drinks order was taken, a long tray of bread arrived, and – wow! This warm, buttery and flaky brioche was one of the many highlights that enticed us back time after time!

Image 4: Before bringing the menu, this came… a warm, puff-pastry mushroom tart. As there was no tasting menu here, as usual, we ordered a selection of dishes to get an idea of the latest menu.

Image 6: And now, a Pierre's classic starters - leeks with smoked eel. Slight salty by itself, but perfectly matched with the tender leek terrine. The cashew nuts added a nice crunchiness.

Image 7: Beneath the foam were snails, girolles, and mash. And, once again – wow! Each ingredient brilliantly complemented the others, in terms of both texture and flavour!

Image 8: We just couldn't get enough of it! Every bite made us want more. The soft-yet-crunchy snail, the intense wild mushroom aroma, the creamy mash – together they made a flawless dish! I’d come back yet again, just for this course!

Image 9: I would never have ordered this without a strong recommendation by our waitress. And I’m glad I did, because my expectations couldn’t have been more wrong. I could hardly believe that such an odd combination - black pudding, sautéed apple, and crispy thin bacon – could actually make such a delicious trio! The waitress was right - this was another unmissable course! Very impressive!

Image 10:
Here was what we have all been waiting for - Koffmann's signature Pig's trotter.

Image 11: Marco Pierre White once said that if he had to pick one dish to have before he dies, it would be this one! The sauce alone was packed with flavours - chicken, veal, shallot, morels, vinaigrette, cognac and more, and there was a mildly sweet aftertaste. Superb!

Image 12: Stuffed with chicken mousseline, sweetbreads and morels, it had a fabulous texture with powerful flavours. Surely one of the most amazing dishes of all times - I can’t believe anyone would disagree!

Image 13:
It was also accompanied by mash and paper-thin bacon.

Image 14: We had ordered two other main courses. First was the well-braised and fork-tender beef cheeks. A nice dish for sure, but it still took Second Place to the wonderful trotter course of earlier.

Image 15: And there was also Roasted rabbit, with Dijon mustard. This was, surprisingly, rather dry. A very ordinary dish, in fact. Still, the pig's trotter was more than enough to compensate for this slight disappointment.

Image 16: We liked the fries so much that ordered another portion!

Image 17: For dessert, it just had to be Pierre's Pistachio soufflé, served with pistachio ice cream. It’s so good, that we have it every time we come. If you want to know what the texture of a proper soufflé should be, this amazing dish will show you.

Image 19: For a second dessert, we had French custard cream. Lying indulgently in a pool of vanilla cream was an unusual meringue-like object, which turned out to be hard on the outside and soft on the inside. It was, we were informed, a "poached meringue". Unusual, perhaps, and even slightly strange – but fun and tasty!

Image 21: So, after all that, what did we think? Basically, Pierre Koffmann lived up to his fame! There were lots of high points during the meal, but the eel, snail, black pudding, soufflé, custard cream, and of course, the trotter deserve a special mention. We haven't had so many good dishes in a single meal for some time. . Outstanding! As a bonus, Pierre himself was present on this occasion, and he presented us with a signed menu as a souvenir!

Image 22: Interestingly enough, the back of the menu carries an illustration of a pig trotter.