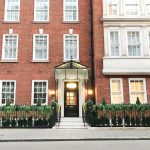 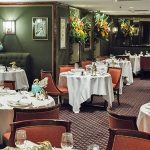 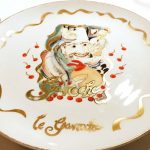 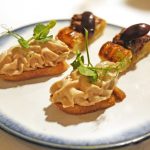 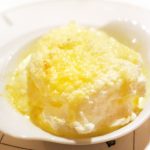 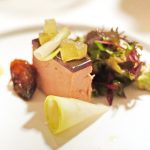 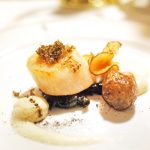 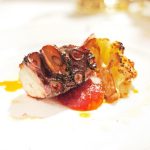 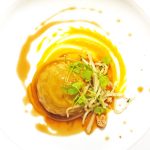 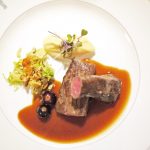 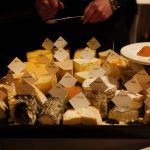 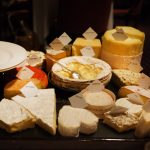 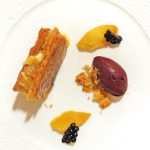 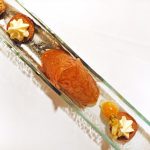 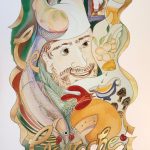 Image 1: Le Gavroche, was not just the first in UK receive a Michelin star (1974), but the first to achieve 2-star status (1977), and also the first to win 3-star ranking (1982). The Roux brothers also have another 3-star establishment in UK - The Waterside Inn, which has also boasted this prized status since 1985. Today, the Roux brothers are both retired, but their sons, having been groomed to succeed their fathers since they were very young, took over the reins seamlessly - Michel Roux at Le Gavroche and Alain Roux at Waterside Inn.

Image 2: La Gavroche, has actually been on my "To Do list" for more than a decade but I've always been a little reluctant to visit because I've suspected that it's one of those places whose glory days are long gone. Recently, I realised this restaurant is also on my friend Bruce Palling's "hit list" for a long time, hence it was the spot for our next dining date. It didn't take long for us to realise that this place simply had no personality as if we were at a corporate dining event. Things were organised like a typical banquette, allowing the kitchen to produce dishes in bulk and serve them to a group of tables in one go.

Image 3: To make matters worse, there was very little communication between guests and the team members - A menu was handed to each of us at the beginning without any explanation, we ordered the tasting menu which kicked off their routine, the next time we heard from them was near the end when the manage asked us about the meal. Still, even if the service wasn't too great, our hopes were still high concerning the food - expecting some beautifully-prepared classic French dishes!

Image 4: Or perhaps not. Certainly, it was a disappointing start. Even though we were being charged close to £175 per head for the menu, the amuse bouche consisted of just this - foie gras mousse and smoked eel. Pretty similar, I couldn't help thinking, to the canapés served at my colleague's farewell party at a pub the week before. It was clear that the kitchen here was simply doing the bare minimum to get by - these days, you'll find more exciting dishes at the average gastropub.

Image 5: Now to the menu. The first course was a cheese souffle cooked with double cream. Although the flavour was strong for a first course, it was light and fluffy, and very enjoyable. What I didn't realise, at that point, was that it was to be the best course of the whole meal!

Image 6: To be frank, the entire tasting menu was simply boring. Most of the courses were standard, off-the-shelf' type dishes - foie gras, scallop, fish, lamb or venison, dessert, cheese trolley. Of course, it's perfectly fine to have dishes like this on the menu, but if you want to stand out from the crowd, you have to make them extra-delicious. The second course, terrine of goose foie gras topped with port jelly. It would be unfair to say it was poor in any way, but it's just rather ordinary. Garnished with apple and kohlrabi, and a drizzle of vinaigrette.

Image 7: Next up was roast scallops, smoked Jerusalem artichoke and fresh truffle. The thing that struck me immediately about the dish was that it had no aroma whatever. The scallops had clearly been sitting in the kitchen for some time. They were still soft, but became sticky and chewy inside, a bit dried out. And to make matters worse, they were nearly cold. You'll get much better jumbo scallops, fresh from the grill, at the Borough Market food stalls. There, they serve three pieces, beautifully garnished with chorizo crumbs, for just £6!

Image 8: If we were hoping for better things to come, our hopes were dashed when the next dish arrived. It was braised and roasted octopus, cauliflower and chorizo picante. Again, it just wasn't hot enough, and you can get similar dishes in many tapas places. This restaurant really has got a lot of improving to do if it wants to compete with the best!

Image 9: Before the main course, we were served with a single raviolo. The pasta was good, and was stuffed with shoulder of braised lamb , together with grain mustard, pumpkin and amaretti sauce. This was very enjoyable - pity the portion wasn't a little larger. With all that had gone before, our expectations weren't high when the main course arrived...

Image 10: ... because it was as totally uninspired - loin of venison with brussel sprouts, girolle and juniper jus. To be fair, the meat was lean and tender, and it had been well cooked with a nice pink centre, but once again, it was not warm enough. When the manager came by to ask how we were enjoying our meal, we were honest (but polite) and pointed out that several of our dishes had been nearly cold. In exchange, we got the predictable response - apologies and a promise that the comment would be reported to the kitchen.

Image 11: The service - which hadn't been exactly great from the very start - got even slower during the second half of our meal. It was so slow, in fact, that I had to prompt them to serve our cheese course. Even then, we had a 10-minute wait before the cheese cart appeared, laden with French and British cheeses.

Image 12: On a more positive note, the waitress was very patient and did an excellent job of explaining each cheese to us.

Image 13: The dessert was pretty decent, too - the puff pastry, which sandwiched caramelised apple, was perfectly made, both buttery and crispy, and came with blackberry sorbet on the side.

Image 14: After that small surge in positivity, we came crashing back to earth again with the petit fours. You'd think that a Michelin 2-star restaurant would blush with embarrassment at serving such a simple petit fours! This place is supposed to be among the best in the country! Come on, guys - at least make an effort! At this point, Bruce and I agreed that there was no escaping the conclusion - this restaurant has passed its time. It was a big let-down even my expectations hadn't been high.

Image 15: Not only was much of our meal cold and lack freshness, but the menu lacked any sort of creativity as if none of the team had eaten out in London for the past decade. I don't need every course to have a jaw-dropping "Wow Factor", and even old-school cuisine can be very enjoyable if it's made and served with some personality. But this meal had no such saving graces - I felt like I was sitting in a factory and being served from a production line. I guess the owners won't be worrying too much - after all, they had a full house even on a Tuesday night - and about half the tables had two sittings. Good for them!