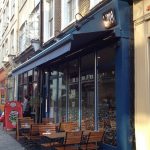 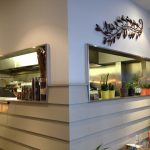 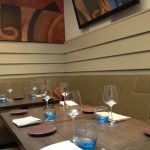 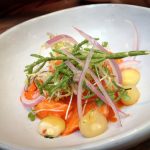 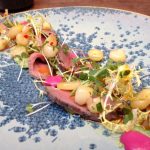 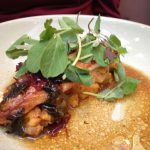 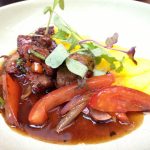 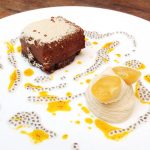 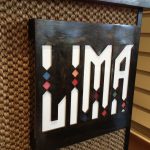 Image 1: (NOTE: My review on Lima is based on a meal I had prior to them getting their first Michelin star). Having been to Peru a few times, it caught my attention when I learnt that the restaurant Central in Lima, labelled as one of the best restaurants in Peru, now had a sister restaurant in London just minutes away from Tottenham Court Road station.

Image 2: Martinez had training at Can Fabes and was the executive chef at Astrid & Gastón before going solo. The setup of this London restaurant allows each diner to have a glimpse into the kitchen once they stepped into the place. Passing the narrow kitchen area was the dining room.

Image 3: Small wooden tables without cloth surrounded by bench seating along the wall. The restaurant was not spacious at all and it would be difficult to get a dining room simpler than this. After a disappointing couple of their take on pisco sours, I proceeded to ordering a few courses including some of their recommendations.

Image 4: To start, a ceviche of organic salmon garnished with red onion, samphire, and giant Peruvian corn. Nothing too exciting but it wasn't a bad starter. I did however find the heat from the rocoto aji, small chili pepper was a bit strong.

Image 5: The second course was a duck salad which consisted of slices of duck mixed with Amazonian nuts and those giant Peruvian corn again! The duck was tender, but given I was never a big fan of the giant corn, I was not going to change that day either! Both starters were mediocre... I don't know, maybe I expected more exotic flavours...

Image 6: I tried a fish course of black bream cooked in butter together with cassava mojado and seaweed. It was alright, at least the fish has no bone. Maybe Peruvian cuisine isn't my cup of tea or maybe I expected too much.

Image 7: For the meat, I went with lomito saltado a traditional stir fry dish using sirloin steak served with onion, tomato, black quinoa and mashed potato. Though there was nothing special about their 3000m high altitude grown potatos, the meat was succulent with the right amount of fat. This course was very decent with good flavours.

Image 8: For dessert, I went for the chocolate cake. The plate was nicely painted with chia seed, a versatile ingredient used widely for both savoury or sweet dishes. More interesting was the mousse made from maca, a plant native to the Andes and often used as a root vegetable. The chocolate was not too strong that I could still taste the unique maca mousse. Nice finish to the meal.

Image 9: The meal was alright and yes, I wasn't impressed. There were days that it took years of hard work for an established restaurants to be awarded with a Michelin star. I was depressed after seeing Lima's name on the 2014's new 1-star list just a week after this meal. What a joke!