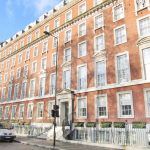 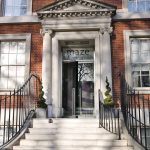 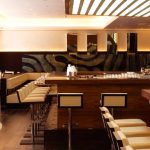 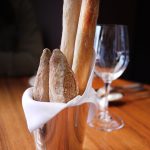 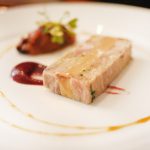 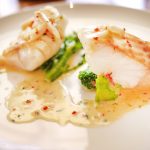 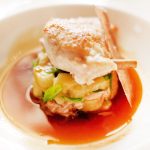 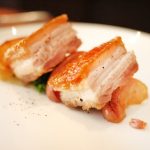 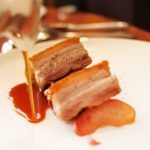 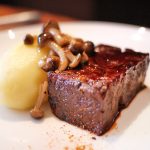 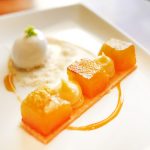 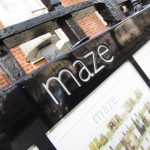 Image 1:
The Maze restaurant is located in Mayfair, one of London’s most exclusive areas.

Image 2: When the restaurant was first opened, some years ago, Jason Atherton headed up the kitchen.

Image 3: This was big news at the time, as he was the first British chef to complete an internship at El Bulli. He now has his own place at the Pollen Street Social and continue to expand his empire!

Image 4: When we arrived for lunch one Saturday, we found out that there was a 4-course lunch menu for just £24 from a choice of 10 dishes. As it’s a Michelin starred restaurant in such an exclusive spot, that’s great value for money!

Image 5: A small bucket of bread, deliciously fresh and warm.

Image 6: To start, an unexpectedly generous portion of pressed chicken and foie gras, served with pear and saffron chutney on the side, and prettily surrounded by circles of green tea caramel. The tender and nicely-flavoured meat and rich foie gras was complemented well by the fruity chutney. I couldn’t help feeling that the green tea caramel didn't add much apart from decoration.

Image 7: Braised pollock, topped by chopped razor clams and finished off with chilli-lime-coriander sauce. Although it was soft, moist and flaky, the flesh wasn’t as delicate as cod – but it was about as good as it gets for pollock. Together with the exotic-tasting sauce and the strong texture of the razor clams, it made a great dish. So far, I was impressed by the quality – well beyond my expectation!

Image 8: This roasted poussin breast was sitting on a stack of potato salad with confit leg and pancetta. The crispy skin was simply awesome and the vinaigrette enhanced the flavour beautifully. Another outstanding course!

Image 9: Sinful, but delicious - pork belly with a touch of Sichuan pepper. Like Chinese-style roast pig with a thick crunchy skin!

Image 10: Almost hidden underneath were a few slices of braised apple, which beautifully cut through the fat on my palate.

Image 11: Another meat course - this time braised beef dusted with Togarashi (Japanese 7-spice blend), garnished with a few cute-looking shimiji mushrooms. Although it was one of the cheaper cuts of meat, a feather blade, the chef had stewed it until it was fork-tender, proving that cheapest cuts can be delicious if cooked right! Plus, it came with a sizeable helping of mashed potato, ensuring wouldn't leave the place hungry!

Image 12: For dessert, a pineapple tart tatin with cardamom cream, together with a coconut and lime sorbet. With lightly caramelized pineapple, buttery pastry and not overly-rich cream, it was nothing sophisticated - but it was a good dessert, nonetheless.

Image 13: I suppose one’s final impressions of a meal must always be heavily influenced by one’s initial expectations. In this case, paying just £24 for 4-courses in an expensive location meant that I hadn’t expected much at all. But, as I’ve described, we were in for a surprise. The service was smooth and they had no issue that we requested for three more rounds of bread!