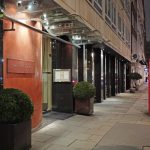 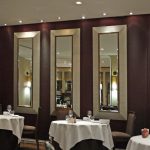 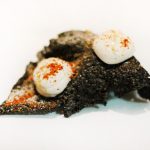 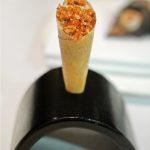 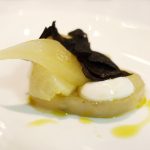 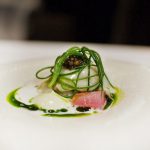 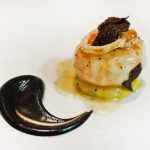 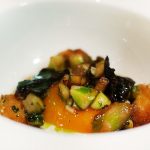 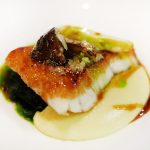 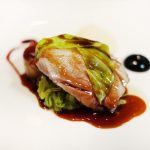 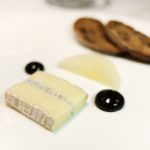 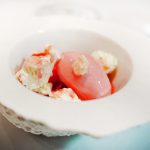 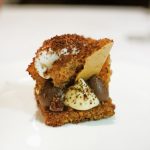 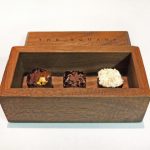 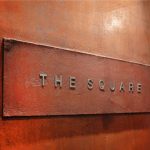 Image 1: This is my third visit, after a seven-year break, to this Mayfair restaurant. The chef is Phil Howard, who’s held 2-stars for almost two decades now. Luckily, I secured a last-minute Sunday dinner booking – this is one of the few fine dine places open in London on a Sunday.

Image 2: It may be a Sunday evening, but it’s pretty much a full house with only a few empty tables. This time, instead of the set lunch, I ordered the full dinner tasting menu.

Image 3: As expected, there was an amuse bouche as a pre-menu welcome. First up, a tomato and foie gras mousse cone, sprinkled with hazelnut. Richly seductive with a thin crispy cone. Great start!

Image 4: A squid ink cracker, topped with a cream made with clam. I liked the aroma from the touch of lemon zest.

Image 5: Now, a trio of goodies - garlic cream beef, a parmesan onion tartlet and seaweed apple balls. Seriously good nibbles, these. Each one was clearly distinct from the others, with each component standing out in terms of taste - garlicky, meaty, cheesy, leeky, savoury, fruity. Wow! My taste buds felt pampered already – and I hadn’t haven’t even begun my tasting menu yet!

Image 6: The first course of my 9-course menu. It was braised white beetroot, soft and creamy, with a hint of smokiness from smoked ricotta. Then the sweet and fruity sense of pear kicks in. An excellent dish - the Périgord truffle garnish gave an attractive earthiness to the simple ingredients.

Image 7: Jersey rock oyster. I loved the fact that the oyster wasn't overly salty. Instead, it was fatty and creamy, with an elegant flavour that derived a natural saltiness from the Oscietra caviar. With the touch of oyster cream, the light rhubarb acidity and the diced sweet apple… it was obviously made with top-notch ingredients. Definitely a highlight of the menu!

Image 8: This, according to the waiter, is their signature dish - Scottish langoustine tail, laid on a disk of parmesan gnocchi and coated in potato and truffle sauce. By its side was black truffle mashed potato, which raised the question how they got it that black. Obviously, black truffle alone wouldn’t do it - so maybe squid ink? Well, whatever – the concept was perfect. Unfortunately, the execution was a serious let down - the langoustine was overcooked, dry on the outside and tough inside. Shame!

Image 9: Warm egg yolk, precision-cooked with a runny-yet-sticky texture, together with pieces of deep-fried sweetbread and (again) topped with a few slices of black truffle. Surprisingly, the best component was the julienned onion underneath. I’ve never been a great fan of onion, but the chef had captured the delicious onion flavour without those "leeky" overtones. In fact, I had to ask for an extra piece of bread to soak up every drop of sauce and yolk. A very homey plate – was more of a signature dish than the previous one!

Image 10: Roasted zander, with an amazingly crispy surface, sitting on creamy potato. The best part was the earthy Cep mushroom and the light garlicky flavour that permeated the fish. The worst part was the spinach underneath – much too salty. Perhaps the chef was over-excited when sprinkling flakes of sea salt!!

Image 11: The main course was this 55-day aged pork, which came in just three tiny and thin slices. Next to it was Parsley root purée and cabbage. The dark sauce was pickled walnut sauce, which was surprisingly deep and fruity, like a mix of Chinese char siu and plum sauce with a hint of cinnamon. The meat was tender, with just the right amount of fat, but it still lacked a certain Wow! Factor.

Image 12: Brie de meaur, with a layer of truffle cream in the middle. More truffle.... Black truffle used to be considered as a delicacy, but over the years it’s become popular to the point of common even Starbucks in US sells black truffle roasted almond, and many supermarkets now carry truffle oil crisp! Of course I’m not complaining, but strange that they used the same pickled walnut sauce as the previous course.

Image 13: Pre-dessert. The rhubarb sorbet on its own would probably be way too tangy, so they served it with bits of vanilla ice cream and a sweet blood-orange sauce. Nice and refreshing.

Image 14: Modern tiramisu as the final dessert. Stacked together were chocolate Sorbet, salted espresso meringue (too salty though) and mascarpone ice cream. It had the characteristic flavour of tiramisu but a different texture.

Image 16: Overall, it was a delicious meal, with each dish carrying the flavours of the ingredients clearly. The service was smooth, with each table meticulously attended by staff. Frankly, there’s not much I can complain about even if I'm being picky, though, perhaps the langoustine was a tad overcooked. Despite it is one of the more expensive menus in town, but I’ll definitely return soon. According to rumour, the high Mayfair rents are causing the chef to consider moving to a new location – if so, let's hope the menu drops in price accordingly!