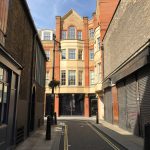 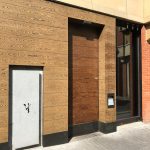 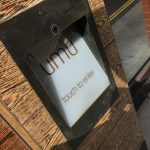 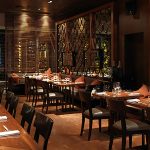 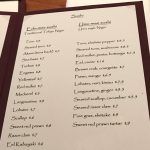 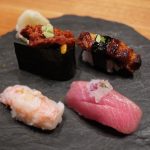 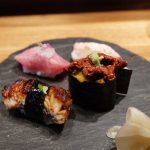 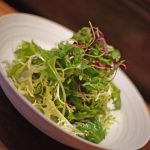 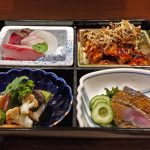 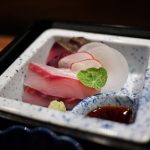 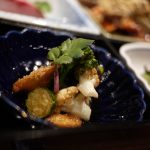 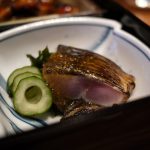 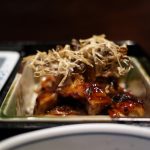 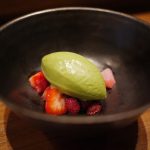 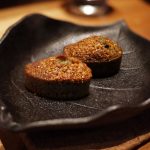 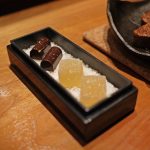 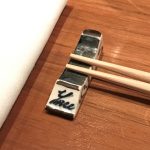 Image 1: This is my third visit to Umu, a high-end Japanese restaurant in the heart of Mayfair, run by Chef Yoshinori who was trained at Kitcho in Kyoto (the “Mecca” of Kaiseki). It’s not in the most obvious of locations, especially if you come by at night. The entrance is tucked away in a side street …

Image 2: … and you could easily walk by without realising there’s a Michelin 2-star restaurant behind the wall.

Image 3: If you do as the sign says, a huge wooden door opens up…

Image 4: … revealing a whole new world inside - a dining room and sushi bar. My previous visit was two years ago, when I was treated with a birthday dinner, and - on that occasion - I was still a little hungry when I left. £8 for a small bowl of steamed rice, and £6-£9 for a small piece of sushi was a bit over the top. The full tasting menu was £150 per head, and it would have been easy to end up with a bill in excess of £200/head.

Image 5: However, as my foodie friend, Hungry Hoss , was down from Manchester for a weekend, and was in the mood for some decent Japanese food, I had another look at the Umu menu, and decided that the lunch menu looked a bit more reasonable. And, now that I’ve actually had the meal, I can confirm it’s actually great value, in the context of refined Japanese cuisine in London. The Bento lunch box comes with salad, soup, sashimi, meat or fish, vegetable, rice and dessert – and, at just £40, it’s a bargain in Mayfair!

Image 6: Despite this great value, I felt a bit greedy, so I had a few bits of premium sushi before the bento box – langoustine, fatty tuna (toro), grilled eel with sweet soy sauce (unagi kabayaki), and sea urchin (uni). They were expensive extras, but I didn’t regret it for the pure and fresh taste of the langoustine, the melt-in-mouth texture of toro (though, admittedly, it was quite weak in flavour), the charcoaly overtones from the eel and the richness of the uni, that carried no trace of an unpleasantly bitter aftertaste.

Image 7: Though it was excellent, but it’s not the best sushi in town as Zuma’s toro and jumbo prawn is far better, and Sushi Tetsu is in a different league. But Umu’s up there for sure. The only downside was the extremely small portions. I had lots of top-class Edomae sushi in Japan, and the portions here have to be among the smallest I’ve had. I always disagree with the cliché, “it’s about quality, not quantity” – for me, that should read: “it’s about quality and reasonable quantity”!

Image 8: A salad, before tucking into the Bento box.

Image 9: And now, the – very extravagant - Bento box itself.

Image 10: I began with two thick pieces each of sashimi of bonito and sea bream. Both were beautifully fresh and moist, perfected with a touch of soy sauce.

Image 11: Then, a stack of marinated vegetables. Nice and crunchy.

Image 12: This was followed by a bonito terrine, covered in jelly made with dashi. Great flavours!

Image 13: Rather to my surprise, this simple-looking teriyaki chicken was actually the highlight of the meal. It seems that each piece was individually trimmed to have just a thin layer of fat before being put on grill, resulting in each bite having a nice crispy skin with a pleasant balance of meat and fat! I thought it was excellent – as was the rice. Very satisfying! There was also a bowl of white miso soup, which I prefer to the more typical red variety, as it has a milder flavour.

Image 14: And (almost) finally…a choice of matcha or black sesame ice cream, or yuzu or pistachio sorbet. I went with the matcha. Texture wise, it was creamy with no trace of ice; flavour wise, I liked the fact that the green tea taste was intense without being too sweet. A perfect finish the the meal!

Image 15: Last, but far from least, a warm matcha madeleine…

Image 17: It’s not easy to find something that’s very refined and good value at the same time. This is particularly true with Japanese food, as the ingredients are often very pricey. But the set lunch (except the sushi, which was extra) here at Umu , a Michelin 2-star restaurant, is an exception. And needless to say, the service was smooth throughout. Recommended!