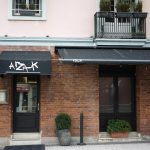 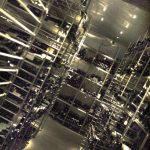 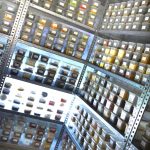 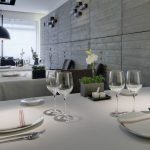 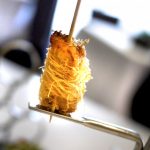 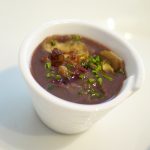 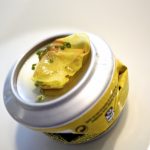 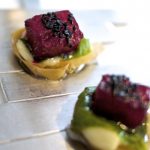 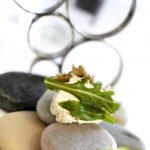 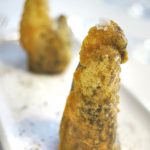 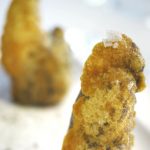 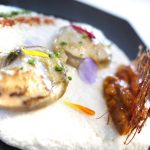 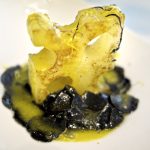 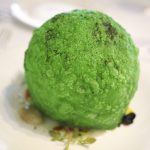 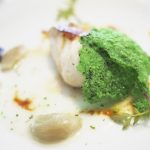 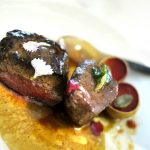 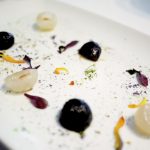 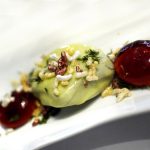 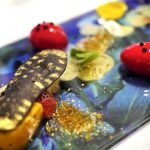 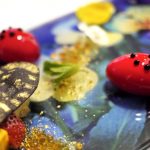 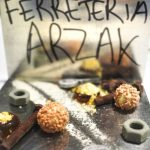 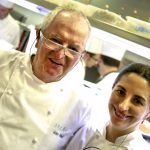 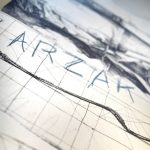 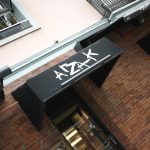 Image 1: Review contributed by DWB. See here for full version.
Juan Mari was the first, and continues to be, the longest holder of three prestigious Michelin stars in Spain. First awarded three stars in 1989, today he continues to push the culinary boundaries with his daughter and co-head of Arzak, Elena. Elena herself also won the title of Best Female Chef award in 2012, clearly this is an overachieving family.

Image 2: Elena arranged for her sous chef Igor Zalakain to show us around the premise before seating down. The impressive wine celler upstairs stocked about 100,000 bottles of wine.

Image 3: This was followed by another flight of stairs up to the spice room that contained more than 1,400 varieties – all for the purpose of experimenting to create new dishes and flavours. Right next door was the experimental lab which was in full swing.

Image 4: As we came back downstairs, Elena directed us to our dining table and explained how the menu worked. There was one tasting menu and a few of the courses had two choices. After explaining we had no allergies or dislikes, we left Elena to make the decision of what we should order. After scribbling a few things down, she disappeared for a brief moment to let the sommelier pour us a glass of cava and serve the arrays of delicious amuse bouches.

Image 5: The first amuse bouche was the Kabrarroka pudding with kataifi which was essentially scorpion fish pudding that had been wrapped in a threaded pastry commonly used in the Middle East. The fish was delicious and creamy, and a lovely contrast to the crispy coating.

Image 6: Followed by a sweet and salty combination of Beans, bacon and chestnut. It was a good progression of flavours.

Image 7: A rather refreshing and unique combination of Chorizo and Tonic served on a squashed can of tonic. The chorizo was wrapped in a thin sheet of mango and the oiliness was washed away by the tonic. Simple but spectacular!

Image 8: Red Codfish on a crispy pastry and brandade. I particularly enjoyed the saltiness from the brandade and the contrasting textures.

Image 9: The last of the amuse bouche was Sunflower seed with arraitxiki. Arraitxiki is a local bony rock fish and it was my first time trying it. It had a very deep flavour with a long aftertaste and went well with the toasted sunflower seed. It was a great way to set the scene for the main segment of the meal.

Image 10: After a brief moment to take in all the flavours from the amuse bouches, we were ready for the first course of the evening, Cromelech, manioc and huitlacoche. The Cromelech (monolithic structure in Welsh) symbolised the relationship and marriage of the land and sea of the region.

Image 11: The crispy manioc (better known as cassava) casing, hydrated with huitlacoche (a corn fungus used in Mexican cuisine with smokey and earthy flavour), puffed up when added into hot oil. The casing was then stuffed with a preparation of poached onion, green tea and foie gras cream. We were advised to flip it upside down and eat it like an ice cream cone. It was fun but more importantly delicious and creamy inside!

Image 12: I particularly enjoyed the next course of the Oyster with sea crust, essentially warm oysters with sea urchin and a salty crust. It was a very clever dish as the oyster quickly cooked on one side could be left on the salt plate to suit each customer’s preference of seasoning. To top it off, the sea urchin served fresh and dried complemented the oyster both in texture and flavour, and reminded me a bit of katsuobushi (or bonito flakes).

Image 13: As my companion enjoyed another fish course, I was served with the Potato cube with fresh truffle, egg yolk and orange zest. The black truffle was sourced from the region and the eggs were fresh from the day. The components altogether almost gave a sensation of eating a creamy tortilla but with black truffles. The orange zest provided some acidity to lift the dish, perfectly matched with a glass of Riesling.

Image 14: For my main fish course I had the Monkfish green witch. The green sphere itself was made from reduced fish stock and parsley sprayed onto an inflated balloon with several layers of obulato sheets (transparent edible gluten free sheets) in between. The balloon was then popped and removed, and the remaining shell fried before plating up.

Image 15: The balloon was cracked and then partly removed from the plate, uncovering the monkfish with confit garlic. The lard wrapping of the monkfish kept it moist and juicy. The gooseberry was very subtle. The green fragments were deceivingly tasty so I ate the bits that were removed to a side plate as well!

Image 16: Elena came out to serve the next dish to explain that meat on the Longan, deer and roe deer was the side dish, and that the longan and fried grape garnish (next photo) was the main component. The “garnish” also contained red pepper sauce in the shell of the longan.

Image 17: Although this was a somewhat unexpected approach to a main dish, the powdered ingredients dusted across the plate were composed of various flavoursome herbs which were very worthy of being the main component of the dish! I really enjoyed the two cuts of meat, served almost rare just the way I like it, but I thought the dish could have done without the longan.

Image 18: As we ended the main act of the meal I thought the portion sizes were spot on. I was neither too full nor hungry and definitely ready for some sweet treats at this point. The first dessert was Roots, fruits and seeds, where a thin layer of white chocolate flavoured with parsley and filled with black chocolate emulsified with kuzu and lime flavour. This was served with Frangelico and Aperol balls.

Image 19: The second dessert and grand finale was the Golden footprint and ladybird. The caramalised fruits served under black sesame bread (the footprint) was delicious and I particularly liked the peach which was extremely sweet and melted in your mouth, almost like a mango purée.

Image 20: Additionally, there was a pepper and liquorice ladybird filled with vanilla yoghurt pannacotta and olive oil cristal. I must admit that whilst it didn’t visually capture me although I did find this humorous, I enjoyed the flavour combination of the components coming together. The accompanying passion fruit and banana ice cream was the icing on the cake.

Image 21: At first glance I didn’t know what was being served with our coffee but I soon realised that they were petit fours. A bit more humour to finish the meal with chocolates from the Ferreteria (Spanish word for hardware store), which consisted of keys, bolts and screws!

Image 22: The cooking here was undoubtedly deeply rooted to the Basque heritage and they were rightfully proud of it. Without roots, Arzak could not exist. However, with an inquisitive mind that constantly strives for inspiration from beyond their native land, Juan Mari and Elena are a cut above the rest. It is the application of this curiosity and creativity into the deep roots of the Basque cuisine that make Arzak unique.

Image 23: The food for me was delicious. Some of the flavours I encountered were completely alien to me, yet I also found some dishes to be familiar and comforting. Dishes like the ladybird brought out Juan Mari and Elena’s humour, but admittedly, without the detailed explanation from Elena, I’m not sure whether I would have captured some of the subtle cultural reference only a local would have picked up.

Image 24: One thing for certain however was that everyone around us, young or old, local or foreign, looked undeniably as happy as a kid in a candy shop. I know it’s selfish of me but a big part of me hopes that Elena will be joined in the kitchen by her kids in the future, just as she did with Juan Mari to maintain the roots and tradition of Arzak.